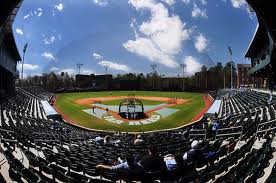 When news came down on the UNC Baseball Facebook page that Grafton Garnes had
passed away, there was a collective gasp among all former Tar Heels who had the
opportunity to be around the longtime equipment manager. Garnes was a beautiful person,
the kind that you always remember long after you play in a North Carolina uniform.

We dealt with Garnes nearly every day for four years. He was the first man we saw when
we came in for practice or a game and the last one we saw when we left. Every player
would sack and pin their baseball undergarments in a fish net bag and send it down the
chute  where Garnes would collect and wash them. He'd always have our gear and
uniform cleaned every  single day and at UNC, it was almost 365 days a year, or at least
it seemed that way.

Garnes, who fought for our country in Vietnam, was cooler than the other side of the
pillow long before Stuart Scott, another Tar Heel, started screaming that phrase and
"Boo-Yeah" for ESPN. A tornado could blow through Boshamer Stadium and he
wouldn't be phased. Reggie Jackson and the New York Yankees once played a series
at UNC, and it wouldn't be surprising if you heard Garnes say, "Yeah, so what?"

Grafton Garnes didn't say a whole lot, but when he did, it was something thoughtful
and usually funny. UNC baseball during the 1980's was the Bronx Zoo South, a collection
of characters who were wild, funny, self-absorbed, and in some cases, just flat out crazy.
Garnes was often the most mature adult at the stadium, a man who didn't get caught up
in the ridiculousness that was often created by the leader of the program, Mike Roberts.

Every  day was like a reality show with a cast of talented stars whose personalities
were bold,  humorous, abrasive, and some that were unlike any that we ever experienced
before or after we left Carolina. But not Garnes. He was as steady as a cruise liner in
the ocean. He rarely went off course. Never too high, never too low. Oh, there were a
few times when "G-man" as the players liked to call him, let his guard down and let some
steam off, but that was certainly understandable when you had to work in that environment
day in, and day out.

As quiet and as invisible as he seemed to be, players may have thought Garnes didn't
hear what was being said, but he always was listening. Players may not have thought
Garnes was looking, but he always saw them. Always. Garnes was just so cool and so
unaffected by anything. He didn't care if you were the star of the program like
BJ Surhoff or the ball boy, he treated everyone the same.

There were times that I'd look at Garnes and say, "Can you imagine the things that
this guy has seen and heard in his years with Carolina baseball?" The man could've
written one helluva book. But that wasn't his style. He didn't spew gossip or talk behind
anyone's back. He didn't get caught up in the politics of the program, and if Coach
Roberts demanded something without showing him the proper respect, Garnes just
took it all and kept his trademark cool. But we all knew what he was thinking, "I could
break this little man in two and he wants to talk to me like that?"

Everybody loved Grafton Garnes, everybody. There wasn't one player who passed
through Boshamer Stadium who didn't admire and respect Garnes.  If you can find
anybody to say something bad about Garnes, they'd be the first. Grafton Garnes was
special, as much as part of UNC program as Surhoff, Walt Weiss, or Scott Bankhead.
I, like everyone else who put on a Tar Heel baseball uniform, will never forget Garnes.
Never. Rest in peace, G-man, you'll be missed.
Posted by Paul Devlin at 6:08 PM