ANTON DEITERS: A MAN WITHOUT LIMITATIONS 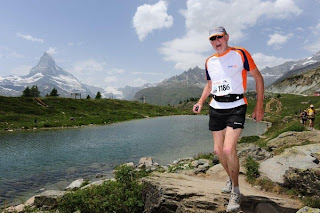 This will be the first and last time you'll probably ever read the name of Anton Deiters in a sentence. He's not on any list of Forbes nor is he a talentless wannabe actor on one of the million reality shows that poison and flood the airwaves. He's never signed a pro contract or picked up a medal for finishing first in an Olympic race. Anton Deiters is a 72-year old man who lives in Ridgefield, Connecticut that just happens to be my new hero.

On a sweltering day in Boston last April, Deiters, who was born in Holland, finished the Boston
Marathon in just over 5.5 hours. That's not really a great time for an avid runner, but for someone who is 72-years old, it's pretty remarkable. More shocking and amazing, Deiters completed the
race less than eight months after flat-lining during a field hockey game in Scotland.

That's right. A 72-year old man was participating in a senior-senior game of field hockey. How
great is that? The guy is running around with a short stick chasing around a ball with players
who are 60 and older.

At halftime of the game, Deiters collapsed in the locker room. He suffered a heart attack and was
gone. No heart beat. Dead. The fat lady had sung. But the paramedics re-started his heart with a defibrillator and took him to the hospital where he was put in a medically induced coma. Deiters
recovered and walked out of the hospital but he wasn't about to quit living just because he had
almost died. 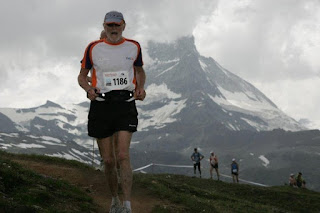 The former banker and lawyer slowly but surely got back to doing what he loves and that's running
marathons. He had done 25 of them in his career before the heart attack, competing in a lot of them
all over the world. In 2010, at the ripe old age of 69, Deiters ran the Zermatt Marathon in Switzerland, which was basically 26.2 miles UP a mountain. It took him 6:29 hours to finish,
which came just three days after he scaled Matterhorn, a significant mountain near the one he was going to try to run.

Deiters ran his first marathon in New York City in 1976 when the organizers reconfigured the
race to go through the five boroughs of the Big Apple. Deiters was hooked. He said he runs
"anywhere, anyplace, at anytime". He's like Forrest Gump in the movie, "Forrest Gump". Deiters
just keeps running and running until he decides he doesn't want to run anymore.

After suffering a heart attack at age 72, Deiters could've decided that enough was enough. I mean,
there comes a point when we  know when to say when, and put the running shoes away, right?
Not Deiters. He knew there was plenty left in the take and felt that life is meant to be lived. No
fear, no limits, no time to quit doing the thing he loves to do. 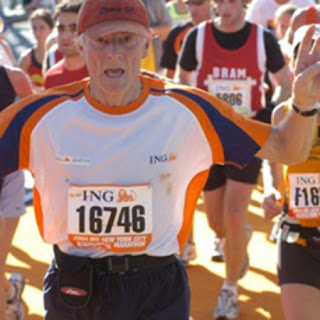 Deiters set a goal to run the Boston Marathon to prove that he could come back from his heart
attack and to show everyone that it would be he who decided when enough was enough. He ran
8-9 miles every other day and incorporated speed and hill work into his regime. Keep in mind
that he's 72-years old! 72!. Deiters, who was one of 11 children, warmed up for the Boston
Marathon by running in a half-marathon in his home state of Connecticut. No problem. He
finished in just over two hours.

When the Boston Marathon came around, forecasters predicted a brutally hot day for the
runners who would try to run 26.2 miles through the suburbs and streets of Boston. Officials
urged many people to come back next year, offering deferrals, which had been unheard of
in the country's oldest marathon. 3,000 entrants didn't even bother showing up. Running 26.2
miles is painful enough, trying to do it with temperatures hovering near 90 degrees is flirting
with disaster. 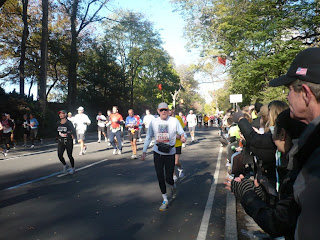 Deiters was unfazed. At 72-years old and coming off a heart attack, he didn't blink. He had
worked too hard and overcome too much to have a little heat prevent him from accomplishing
his goal. Deiters didn't win the race but he conquered the course and the inner demons that
often prevent many of us from fulfilling our true potential. He passed many runners who were
overcome by the oppressive temperatures and waved good-bye to all fear and doubt that may
have started to seep into his psyche.

Deiters completed the first marathon of his "second life" in 5:37:51 seconds. That's a very
respectable time for anyone, not to mention a man who is 72 and just coming off a heart attack.
He is living his life his way. There are no limitations or excuses in Deiters' life.

Anton Deiters is my new hero.