PEYTON MANNING AND ONE HELLUVA NIGHT 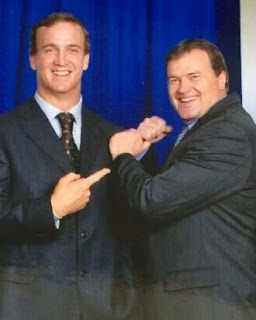 Ten years ago, I was working as a sports anchor/reporter for NESN in Boston. I was the beat
reporter for the New England Patriots and covered them every day for two years. To this day,
it remains one of the best jobs I've had in the business. To watch how that franchise operated
up close and personal was pretty special. It didn't hurt that they went 34-4 over two years
and captured a Super Bowl. Covering the NFL is a passion for me.

In May of 2006, I got a call from MasterCard to see if I was available to host a business outing
where Peyton Manning was going to be the featured speaker. I was like "Hell, yeah! I'll do it",
while soiling my shorts at the same time. It's one thing to be in front of the camera, it's quite
another to be in front of 800 business suits talking on stage. I had a bad experience when I was
13 years-old and public speaking has frightened me ever since.

Now, I was going to be hosting a business outing with Peyton Manning on stage in Boston.
And he was not only in the Patriots backyard, but the hotel where the business meeting was being held, was a stone's throw from Tom Brady's bachelor pad on Commonwealth Avenue. If you're in Boston as the enemy of the Patriots, chances are you're not going to be well-received,  especially if you're Peyton Manning. 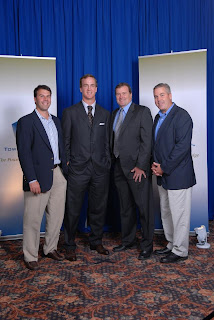 I met with Manning's representatives at the hotel and they took me to meet with Manning
as if they were secret service agents for the president of the United States, the only thing missing
were the sunglassess and ear piece.When we arrived in the business room where Manning was,
I noticed that he was studying intently, as if he were breaking down a scouting report on the
Patriots defense. He had five index cards laid out in front of him on the table. The reigning NFL
MVP was preparing for his speech as if he was getting ready to play for the Super Bowl.

His managers interrupted him politely to introduce me to him. After the pleasantries, he said,
"Man, I know you from somewhere, you look really familiar." I was incredulous that he had
recognized me from anyplace, considering I had never covered the Colts or the University of
Tennessee.

Manning is from Louisiana and I used to work there and I also did a college football
recruiting show for Fox Sports Net that was seen in the Pelican State. I mentioned that and he
said, "Nah, I don't think that's it. It will come to me, but I just know I've seen you before."
Manning then snapped his fingers and said, "I got it! It was 'Bull Durham'! You were in Bull
Durham and I saw you hit that home run." 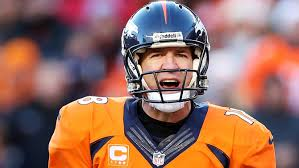 I smiled and looked at his representatives from MasterCard who burst out laughing. I had
been had. Tom Murphy, Manning's rep and a person I had known for a while, had set me
up and told Manning to ask me about that. It was a pretty funny moment.

One of the things that surprised me about Manning, though, was his size. I'm 6'3" 225lbs and
he dwarfed me. Made me look like Muggsy Bogues standing next to Manute Bol. When he
stood up, he towered over me. He's listed at 6'5" but he's closer to 6'7" and around 260lbs and
he made me feel real, real, small.

After I cleaned the egg off my face, Manning and I worked our way down to the stage where
I had to introduce him and ask him 10 questions for the audience. Manning was funny, focused,
and it was obvious that he was preparing for a television life after football. Talking on stage
with Manning was a serious adrenaline rush and I needed a cold one to wind down after the
event. I was talking to Manning's reps about going out on Newbury Street for some drinks.
They were like, "No, he's too tired."

Then Manning sauntered up to me and said with his southern drawl, "Paul, Brady said I should
go to Son-see's. Do you know where that is?" Did I know where Sonsie's was? It was practically
my front porch of where I lived and one of the best bars in Boston. We were on our way.
Manning was fired up to go out and mingle with the Boston public.

When Manning walked into the bar, jaws dropped and cellphone cameras lit up like Christmas
trees. People were texting their friends and taking pictures of Manning like he was the second
coming of Jesus Christ. And he heard from the Boston fans, who are never shy about insulting
anybody. "This is Brady's town!", "Belichick owns you." "Brady's got three Super Bowl rings,
how many do you's got?!" Manning was a good sport and took it all in. He mingled with the
crowd, told a lot of funny jokes, and acted like he was no different than anyone else. He bought
people drinks and picked up the entire tab for our party, which was well over $200. A lot of
stars think they should get a free ride, a free-meal, and get away scott-free without paying for
anything. Not Manning. He was more than happy to pay the tab---in cash.

We left Sonsie's and walked down Newbury Street to another drinking establishment. To see
the looks on the faces of people who had noticed Manning was priceless. It' was like OMG-WTF?
Yeah, WTF, for sure. It's not everyday you see Manning walking down the streets of Boston
in a suit. We closed down the next bar at 2 a.m. and once again Manning was mingling with the
fans and taking their insults along with the compliments. He was a funny, courteous guy, who
was just trying to be like everyone else. It was one helluva night.