You won't see a clip of him on "SportsCenter" in a rant and telling the media "that you play to
win the game!" You'll never see video of him anywhere on ESPN coming out of a courthouse
after seeing the judge about a DUI, spousal abuse, or even a parking ticket, for that matter. The
only time you Jerry York on the World-Wide Leader is when he's hoisting a trophy, and that's
become more and more frequent as his Boston College hockey team continues to steamroll
everybody in it's path. 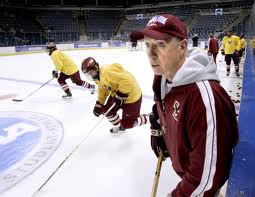 Jerry York is a true coaching legend. He's won more than 900 games, captured national championships with two different schools (Bowling Green, Boston College (3) and he was so
good as a player, Boston College retired his number. On a sports landscape dominated by the NFL, overpaid petulant athletes, and coaches who feel the fans pay to see them, York can get
lost in the shuffle. But he is everything good and everything right about college and professional sports today. There is no ego with York, nor is there any tantrums or outlandish motivational
tactics. He doesn't fall in love with every camera or microphone he meets (see Bobby Valentine)
and his biggest fault is that he my be TOO nice. Think Mr. Rogers on skates. Imagine the Pope
with a hockey stick, and see Tim Tebow with a whistle. 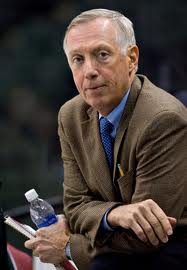 York is courteous, respectful, and the most humble man in college or professional sports.
People talked about Tebow being a breath of fresh air in a sports world that had turned into
a cess pool thanks to Tiger, steroids, Michael Vick,  and every other athlete who got arrested for beating up theirs wives or busted for cocaine, well, then York is the heavy-duty cleanser who
could get out even the toughest dirt stains.

In his 18th year as head coach and 40th overall, York has built a powerhouse program the
right way. "The right way", can be an overused statement, and it's been used before in the same sentence with  Jim Tressel, Bruce Pearl, and Butch Davis, but with York, it's real. He doesn't
have to do anything illegal (not that he'd ever think about it) because he's built a program where
kids would pay HIM to play for Boston College. If a star recruit doesn't have the grades to get
into the beautiful school in Chestnut Hill, he just takes the next great player who's standing in line. 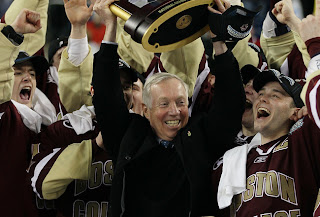 Several years ago, BC's rivals ,who are just a few quick stops down the Green Line on the "T",
built the Taj Majal to hockey. Boston University's hockey facilities were glorious and the made
the ones at Boston College look like a glorified high school hockey rink. Many people thought
this would give the Terriers a huge advantage over the Eagles when it came to recruiting. It did
not. Not even close. In fact, the gulf between Boston College and Boston University got bigger, with the Eagles rolling to more national titles, Beanpot Championships, and Hockey East titles than Boston University. BU Coach Jack Parker may get more attention than York because he can
give a better soundbite or smile just right for the cameras, but York sits way higher on the
mantle of great hockey coaches. Nobody rests above him. York is loyal to his players and his coaches. Mike Cavanaugh, Greg Brown, and Jim Logue have
been with York longer than peanut butter has been with jelly. York trusts them, respects them,
and  gives them a long leash on teaching and instructing players, as well as in recruiting, which
as the numbers of championships the Eagles have, demonstrates just how good they are.

This weekend, BC is the number one seed in the NCAA tournament. They are the best team in hockey right now and are a good bet to win the national championship. When you see York on
"SportsCenter" hoisting the trophy, remember that he's a far better man, than he is a hockey coach
and York is the best one in the country.
Posted by Paul Devlin at 6:34 AM