10. VINCE YOUNG. In November of 2010, Vince Young was
quarterback of the Tennesse Titans. After an overtime loss against
the Redskins where he was booed off the field and threw his
shoulder pads into the stands, VY, now the unofficial captain of
the "Dream Team" in Philadelphia, got into a verbal tiff with then
head coach, Jeff Fisher. Fisher told Young not to quit on the team,
Young responded by saying, "I'm not running out on the team, I'm
running out on you." Young never played for the Titans again. 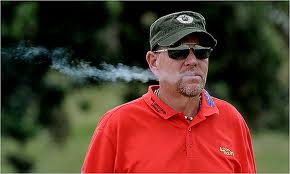 9. JOHN DALY. He's picked up his ball in so many tournaments,
I don't have an official number on the times Daly has packed his
Marlboro's, Diet Cokes, ugly pants, and gone home. He usually
leaves his bag on the course. One time, he pulled the Roy McIvoy
and hit everyone of his Pro-V1's into the drink before calling it
a tournament.

8. LEBRON JAMES. Remember the playoffs against the Celtics
in 2010? Hello? Lebron? Are you here tonight? The King pulled
a vanishing act in the biggest game of the season. His heart wasn't
in the game and he was clearly tanking it. Perhaps, he had just found
out that teammate Delonte West was sleeping with his mother. Which
come to think of it, would put a lot of players in a funk.

7. MANNY RAMIREZ. After failing his second test for a female
fertility drug and finding out he wasn't pregnant, the enigmatic
baseball superstar, took his bat and went home for good. Rather
than takes his 100-game suspension, Ramirez quit on the Tampa
Bay Rays and went home to retire. Manny being Manny now wants
to return to the game and says he'll be a role model. LOL. 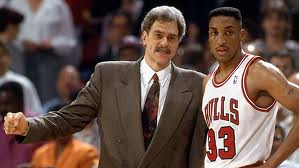 6. SCOTTIE PIPPEN. In the 1994 NBA playoffs, Phil Jackson drew
up a play for the final shot. Michael Jordan was retired at the time
and Pippen thought he was "the man" for the Chicago Bulls. The
Zen Master was feeling it for Tony Kucoc and called his number.
Pippen went all diva and said he wasn't going on the floor. No
biggie, Kucoc sank the game winning-shot and the Bulls went home
happy as Pippen was crying.

5. RICKY WILLIAMS. The Zen Master of South Beach quit on
the Miami Dolphins just a few days before the start of the 2004
season. He totally sold out the Dolphins organization and his
teammates. I think that was the year, Williams went to see the
Dhali Lama or was it Cheech and Chong? I forget. Doesn't really
matter. Talent rules in the NFL an the Dolphins welcomed him
back to the team a couple of years later.

4. JORGE POSADA. Last spring, the Yankees catcher was hitting
the weight of one of my ex-girlfriends (.167) and manager Joe
Girardi dropped him to 9th in the batting order for a Sunday Night
game on ESPN against the Red Sox. How dare Girardi do that?
I'm Jorge Posada! Hip-hip Hor-Hay! Posada got his panties in
a bunch and said he needed to "clear his head". Oh, boy. That was
the only nick on Posada's career, but it was unnecessary. 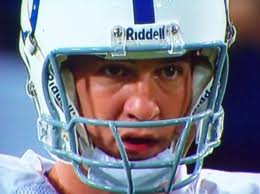 3. INDIANPOLIS COLTS (2009) Peyton Manning and the Colts
had a 14-0 record and chasing history. Playing the New York Jets
with a lead, head coach Jim Caldwell took out Manning and the
starters. The crowd booed and Peyton pleaded to go back in.
No dice. Caldwell had his orders from President Bill Polian, The
Colts laid down and the Jets won to end the dream season. They
didn't win the Super Bowl. Polian got fired a few weeks ago,
Caldwell got the ax today. 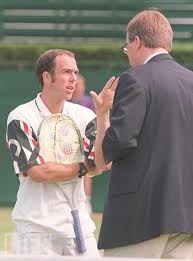 2. JEFF TARANGO. WHO? Nobody really knew of Tarango
in the tennis world until 1995. That was the year the 3-time
all-american from Stanford quit his third round match against
Alexaner Mrunz or something like that. Not important. Tarango,
channeling his inner John McEnroe, who also played at Stanford,
cried about every call. He said the umpire was "corrupt" and
quit. Just walked off the court. That's something no player had
done in the Open era. No more breakfast at Wimbledon for
Tarango. Good tennis name, though.

1. ROBERTO DURAN. In his welterweight match for the WBC
championship against Sugar Ray Leonard, Duran uttered the two
words that will haunt him forever: "No Mas". In the 8th round of
his match against Leonard, Duran was tired of chasing Leonard
around the ring and getting suckered by his antics. Duran, who
was one of the great boxers of all-time, just threw up his hands
and said, "No Mas". So every time somebody quits, it's "No, Mas".
Posted by Paul Devlin at 2:55 PM