TEBOW AND BRADY: GIFTED BUT GIVEN NOTHING IN NFL 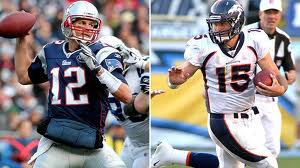 "For everyone to whom much is given, of him shall
much be required." -- Luke 12:48
God must've looked down on Tom Brady one day and said,
"Son, I have blessed you with size, smarts, athletic talent, and
movie star good-looks, but if you want to be my quarterback,
you must earn it." The Patriots quarterback has done his part,
using a legendary work ethic and a fire that burns deep from
within to become arguably the best player in the game. 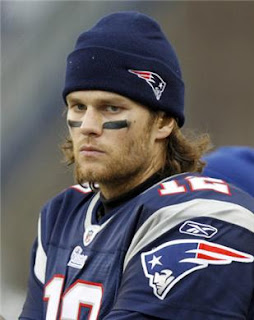 The Lord and Savior of Tim Tebow blessed his child with
size, speed, toughness, but a weak throwing arm and said,
"Junior, if you want to make it as a quarterback in the NFL, you
must believe in me and believe in yourself because with that
chicken wing, you're never going to be Tom Brady." 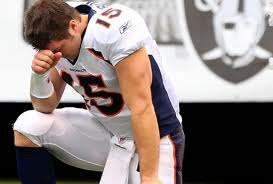 Brady and Tebow will meet on Saturday night in what will
be the most watched playoff game in NFL history. This divisional
game is not so much about the New England Patriots and the
Denver Broncos as it is about Brady, the perfect quarterback,
and Tebow, the quarterback who is far from it, but has
seemingly willed his team to victories.

Saturday's game will be one in which NFL fans will not
be able to take their eyes of because of Brady and Tebow.
They are very much the same, but also very much different.
Both are squeaky clean who always seem to say and
do the right thing. Oh, sure, there are people who get on
Tebow because he publicly thanks his Lord and Savior,
Jesus Christ, every time he breathes, but as Bill Belichick
likes to say, "It is what it is." I'd rather hear that than read
one of Chad Ochocinco's stupid tweets. 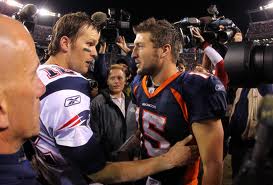 Brady came out of college as an afterthought, a player that
was passed over in the NFL draft by 31 teams at least five
times. He was the 200th player pick in the draft. If he didn't
make the Patriots roster, nobody would've even noticed.

Tebow came out of college as one of the most decorated players
in NCAA history. All-American, Heisman Trophy winner,
2-time national champion and had a cult-like following. Despite
having a weak arm, Tebow was drafted in the first round by the
Broncos. If he didn't make the team out of training camp, echoes
of "I told you so" would have rung out in NFL offices
throughout the league.

Tebow and Brady were given little chance of being elite players
in the NFL. Everybody but Jesus was criticizing Tebow because
he couldn't hit the broadside of a barn at Churchill Downs. Brady
was considered too slow and too weak to be more than Drew
Bledsoe's back-up in New England. 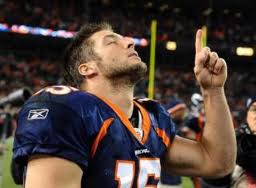 But Brady and Tebow had an ironclad belief in themselves,
a last-to-leave the weight room work ethic, and a competitive
fire that burned like a raging inferno. Critics said they would
never make it, their stone-cold confidence said they would.

Brady got his shot when Mo Lewis of the Jets almost put
Drew Bledsoe six feet under with a bone-crushing hit. He
never looked back, winning Super Bowls and MVP's as if
he owned them.

Tebow got his shot when Kyle Orton and the Broncos
sputtered to a 1-4 start. The former Florida QB hasn't looked
back, but he sure as hell has been criticized by everyone
from Merril Hoge to Meryl Streep. At times, he has played
real ugly, looking like the worst passer in NFL history and
Ryan Leaf played in the league at one time. But he has
provided some magic that has made a lot of us believe and
in some cases, cheer for him.

As Brady is in New England, Tebow is a God in Denver.
God blessed each with a lot of gifts and has seemingly
expected much in return. Brady has delivered, while Tebow,
for all his football faults, just might be on his way.
Posted by Paul Devlin at 7:24 PM