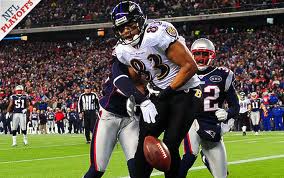 Sterling Moore. Unless you are part of Sterling Moore's family or happen to be Mel Kiper, Jr. in disguise., you probably never heard of him until Sunday. In the final minute of the AFC championship when New England's paper thin defense was getting carved up by the immortal Joe Flacco, Moore made the biggest play of the season for the Pats. Sterling Moore, a guy few had ever heard of, coming through to help the Brady Bunch get back to the Super Bowl. Unreal.

To appreciate what Moore did, one has to understand where he came from and the road he took just to get into a Patriots uniform, much less star in the AFC title game. Moore didn't play football until he was a senior in high school. He went on to play at SMU, not exactly Alabama, in terms of a football school (It was when they were paying guys like Eric Dickerson to go there), and wasn't drafted out of college. The Raiders took a flyer on him, but they cut him in September, then signed him the next day to the practice squad. Then they cut him from the practice squad, which is like being released from the kick-ball team during recess in middle school The Patriots, in need of a warm body for a defense backfield that was porous at best, signed him to their practice squad. They promoted him to the big team, but cut-him a few weeks later. Bill Belichick was so desperate, he had guys like receiver Julian Edelman, who had NEVER played defensive back, covering guys big-play receivers, he brought Moore back again. This time he stuck.

With under a minute to go in the game and trailing by three, Lee Evans, an established and experienced receiver, beat the rookie misfit and cast-off in the end zone. Moore was about to be posterized like the weak and feeble ones who used to gawk at Michael Jordan as he finished off a dunk. Moore was about to become a "Buckner" in the New England. He was clearly beaten, clearly toast. But he didn't quit. He didn't give up on the play, didn't 'quit the ship' like the captain of the Costa Concordia. Moore didn't quit until the referee signaled touchdown. He never would. Moore hacked Evans like NBA thugs used to molest Shaq to send him to the line to make him earn his points. Moore slashed Evans with one desperate attempt to save his job and save the Patriots season. He struck the pigskin flush, and the ball came out and  hit the ground before the two feet of Evans could touch the ground. Incomplete. 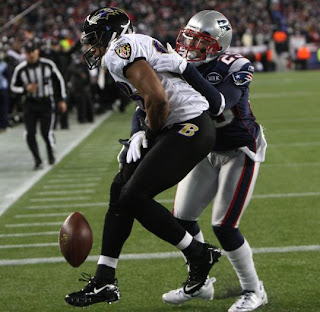 However, the game wasn't over. The Ravens went right back at Moore and he deflected another pass to force Baltimore into attempting a game-tying field goal. It was attempted and not made. Patriots are in the Super Bowl, thanks to a player who refused to give up, or refused to pack it in.

The New York Giants are going back to the Super Bowl because a quarterback believed in himself when others didn't. Before the season started, Eli Manning, who already has a Super Bowl ring on his finger, felt that he was in the same class as Tom Brady. Many people thought that was absurd, like Rex Ryan predicting a Super Bowl victory for a third straight year. Even the so-called experts thought their was a big gulf between Brady and Eli Manning. Who is laughing now? 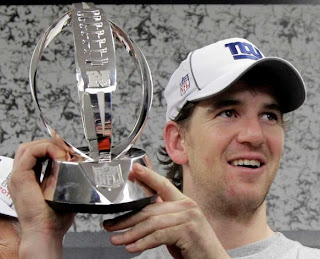 Manning believed it and he's now going to his second Super Bowl, the same number as his older and gifted brother who many thought was ahead of Brady before this season. Eli didn't say he WAS Tom Brady, just that he was in the same class as him. It's funny how we're all taught to BELIEVE in ourselves, yet when somebody else actually does, we laugh or criticize them. We all want to believe in ourselves, don't we? Sometimes it's not a  bad thing to try to trick our minds. All the great ones believe in themselves and because Manning did and came through in big game after big game, the doubters and critics are silent, and that is a great thing.
Posted by Paul Devlin at 5:34 AM