BRIAN BILL AND THE POWER OF ARLINGTON CEMETERY 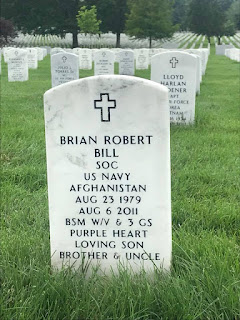 Arlington National Cemetery can overpower you.

It moves you in a way you never thought possible.

400,000 white marble headstones on 624 plush green acres will humble you, take your breath
away, and make you seem as small as the blade of grass that nestles up to a marker letting
you know someone far bigger than you can ever hope to be, made the ultimate sacrifice for
the country. 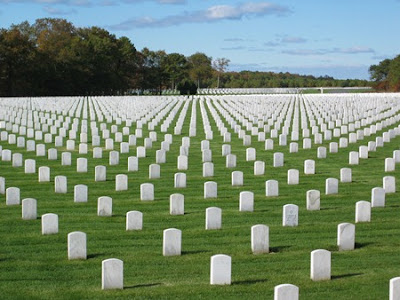 While on assignment interviewing professional athletes Washington, D.C. in June,  I was
drawn to Arlington National Cemetery. I needed to walk the sacred grounds where nearly
every soldier who lost  their life in our nation's conflicts, starting with the Civil War, is buried.

But of the more than 400,000 soldiers laid to rest in Arlington National Cemetery, there
was one I just had to visit, no matter what.

Bill died on August 6, 2011 while fighting in Afghanistan. Riding in a Chinook helicopter,
Bill and 16 of his brothers on SEAL Team Six were brought down by a rocket-propelled
grenade fired by the Taliban. In all, 30 Americans lost their lives - the largest loss of life by
the U.S. in the Afghan War. It's forever known as Extortion 17.

Bill was from Stamford, Connecticut, the town bordering the one I spent most of my high
school years. He was just 31-years-old. I was working at a local station at the time and
when I saw where Bill was from, I wanted to know everything I could about him. And the
more I learned about him, the more I realized what a real genuine hero the guy is. Not was.
Is. 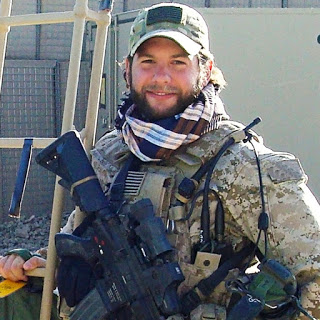 There is no better proof of this than the actions that earned him the third of his four Bronze Star
Medals with Valor. I read this during a fundraising event for Bill last June and quite honestly,
my jaw dropped.

From the U.S. Department of Defense:

While performing in Operation ENDURING FREEDOM, Bill was part of a ground force
element during a daring nighttime raid against a heavily armed enemy commander. While
attempting to engage a barricaded fighter hidden inside the target building, one of his teammates
was struck and mortally wounded by enemy fire, causing him to fall directly in front of the barricaded enemy's position.

With complete disregard for his own safety, Bill fought his way into the compound, exchanging
fire with the enemy fighter while maneuvering to his wounded teammate. Within point blank
range of the barricaded enemy, Bill pulled his comrade from the precarious position where he
had fallen as enemy rounds impacted the rock wall around him. He then courageously exposed himself to the enemy fire again, as he pulled his wounded teammate across the open courtyard
to a position behind cover.

By his extraordinary guidance, zealous initiative, and total dedication
to duty,  Bill reflected great credit upon himself and upheld the highest traditions of the United
States Naval Service.

I have written several articles about Brian Bill and met his incredible family - and if you've
had the opportunity to meet the family you'd probably say "incredible" doesn't do them justice.
They are amazing people - just as Brian was. I've tried to do my best to honor his sacrifice
and fearless commitment to our country with my words and incredible respect for him.
I hold Brian in higher regard than any professional athlete I've ever met or profiled. 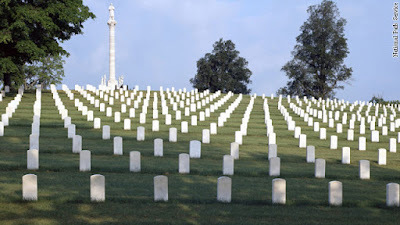 However, during that sweltering day in June, I felt the need to pay my respects to him in
the Arlington National Cemetery.  I went to the information center and typed the name of
Brian Bill into a computer.

That is where the body of Brian Bill, American hero, rests.

No words were spoken between me and my photographer who was on assignment with
me. After I softly uttered, "Section 60 Site 9930" we were muted by the sight of all those
headstones that dominated the land in front of us. 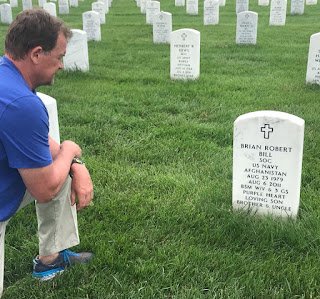 I was in awe of all the soldiers who gave so much to our country. I was once again in awe
of Brian Bill when I came upon his headstone in Arlington National Cemetery. My spine started
to tingle and goose bumps raised quickly across both of my arms. Breathless.

I paid my respects, thanked him for his service, and let him know I had met his wonderful
family. Brian Bill will always be an American hero. He should never be forgotten. Ever.

And if you ever get to Washington, D.C., make sure to visit Arlington National Cemetery.
It is powerful. It is humbling. And it will make you really appreciate what self-sacrifice is
all about.