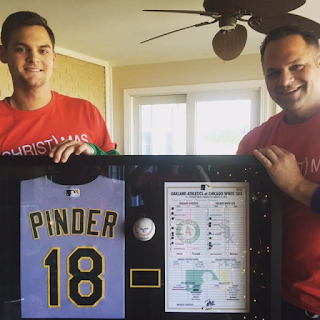 Chris Pinder was selected by the Baltimore Orioles in the 15th round of the 1987 MLB draft.
A left-handed pitcher out of Virginia Commonwealth University, Pinder rose to AA and
played four seasons of professional baseball before retiring. We played against each other
in the Carolina League during the late 80's.

Baseball stayed in his blood, though, and literally. He and his wife, Beth, gave birth to three
boys and a girl, all of whom excelled, or are still excelling in baseball and softball. In August,
Chad, a former star at Virginia Tech, fulfilled his dream by reaching the big leagues with the Oakland's A's.

Can you just imagine being the parents of a kid who made it to the major leagues? Chris Pinder,
in his own words, describes the moment Chad received the call to the show and the greatest
gift he received nearly four months later.

All the kids were home this Christmas which is starting to become more of a challenge as we travel
down the road of life. Our oldest, Clark flew in from Houston where he is working after a very
successful high school baseball career where he was a three-time All-State selection in Virginia.

Our second son, Chad, was able to be here as well after his third season in the Oakland Athletics
organization. Chase, who is four years younger, came home from Clemson University where he plays centerfield for the Tigers.  Our last child, Avery, is a junior at Poquoson High School where she excels in softball and basketball.  Needless to say, we have some athletes who love to compete.

Chad had a meteoric rise through A’s farm system and was playing for the team’s AAA affiliate
in Nashville, Tennessee last summer. He called me one day in August to talk about a hamstring injury
he’d been trying to recover from. 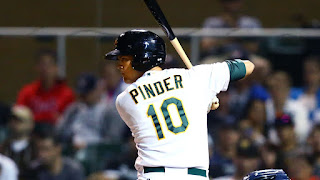 "Pops, just got done with the hammy and they are sending me to Dallas", Chad said over the phone.
I was a little irritated in the fact they would send him all the way to Dallas for a hamstring injury
that he has been playing great on.

I said, "Ok, I guess the A’s have to do what they want. Doesn't make sense,  ok.”  There was that
long silence that made me a bit uncomfortable and Chad put me at ease, then in a state of exhilaration.
"Dad, that was a joke. I just got the call!”, my son blurted into the phone. “I’m going to Dallas to play
against the Rangers!”

I immediately went silent, as if the entire world came to a complete halt. “Really? It couldn't be real,
is it,” I said to myself. “Oh, wait, of course it is. You have taught all the kids to believe in themselves
their entire lives!” 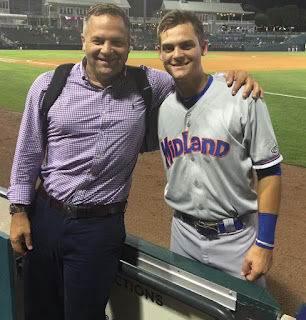 All the minutes, hours, and days spent helping him reach a dream was now really happening. His
hard work, relentless drive, God-given talent and inner fire was rewarded with a gift for Chad to join
The Elite group known as Major League Baseball.

Many of those thoughts blitzed through my mind on Christmas day as the entire family shared
gifts and counted our blessings.  Chad came up to me and said, "Pops, I have one more present for you".
Chad goes behind the couch and pulls out a large rectangular box wrapped nicely and says, "Pops, this
is for you".

I was taken aback and froze just like when he told me he was going up to the big leagues.
I slowly took off the wrapping paper and there it was. I was frozen stiff and speechless. Chad says,
"It's for you, Pops.” It was a shadow box with the Oakland Athletics jersey he was wearing the
day he got his first hit in the major leagues. The ball was also in the shadow box with its MLB
authentic sticker on it. So was the line-up card from that day’s game against the Chicago White Sox.

I just stared at it for what seemed like an eternity.  We were all just stunned that Chad would give
it to me. What a true blessing for my wife, Beth, and I to have kids who think of us in this way. There
were big hugs in the center of the circle in the living room, tears of joy rolling off our cheeks and falling
gently to the ground.

What an emotional event and a great treasure for a proud father to have. It was something Chad
worked so hard to accomplish. I was sincerely humbled and very grateful.

It was the greatest gift for  a father to receive!
Posted by Paul Devlin at 6:07 AM