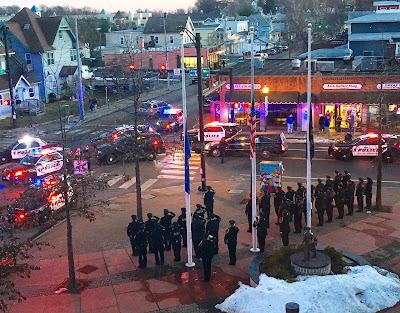 Of all the tributes and pictures that have flooded Facebook over the past few days honoring
Tim Murphy, a former Norwalk police lieutenant who died Monday after battling cancer, there
is one that has seared my consciousness forever.

A photograph of a procession with a hearse transporting Murphy's body, presumably to
a funeral home in Norwalk, shows up over and over on Facebook, paying tribute to a man
who served the community for more than 30 years. It's an image that doesn't need to be
photoshopped or altered in any way, for it is perfect, capturing the emotions of a police
force which salutes a brother outside the station where they often worked side-by-side.

It's a photograph that is a simple, yet powerful one, taken not by some paid professional
who can expertly stage something to bring out emotions, but rather by a remote camera
high-above the station, a higher-power seemingly taking a peak from the heavens, making
sure a beloved son is being properly cared for.

The picture is worth far, far more than 1,000 words but only one is really needed to
accurately describe it:

The definition of respect by the book is "a feeling of deep admiration for someone or
something elicited by their abilities, qualities, or achievements."  On the street, respect
must be earned and is never, ever given. Ever.

Universal respect is something most of his desire, but few ever achieve, especially in
a jaded world ripe with jealousy, ignorance, and entitlement. 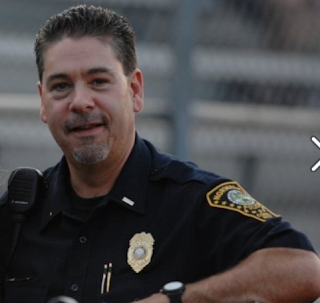 Tim Murphy, in his 33 years on the Norwalk police force and 55 years of life, earned
total and unquestioned respect. If anyone ever questions it, all they have to do is look
at the picture taken outside his former place of employment. Officers saluting, people
stopped in the street paying their respects.

Kyle Lipeika, a Norwalk police officer posted this comment on Facebook, summing up
what Murphy meant to him and everyone else in the law enforcement community.

"The next couple days will be tough, but we will stand tall and we are all proud to
have worked along side a true professional who has taught, guided and influenced
so many people throughout his life. LT. Tim Murphy your legacy will live on and
tomorrow we will honor your life and accomplishments because you have earned
and deserved all the respect."

That is Tim Murphy. That is respect.
Posted by Paul Devlin at 6:18 AM