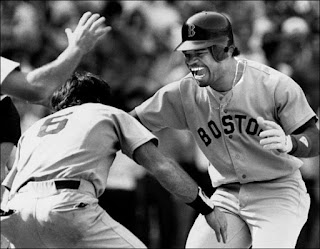 As Dave Henderson grew into a man and major league baseball player, the little boy in
him never left him. His gap-toothed smile that seemingly stretched from Seattle to Boston,
two of the cities that adored him, expressed a love for a game that often disappears in
others once they make it to the big-time.

The pressure of performing under a magnifying glass can make a smile vanish, the love for
the game can disappear with the expectations that come with a multi-million dollar contract.

That never happened to Dave Henderson, who always made it appear like he was the luckiest
guy in the world. His expression screamed out to the world, "Do you mean they are actually
paying me tons of money to play this game? Who is fooling who?" 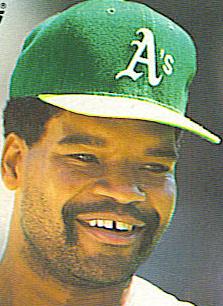 I watched him play many times and don't ever recall a helmet thrown or bat shattered. If
he struck out, Henderson always seemed to have a look on his face that said, "Oh, well.
I gave it my best shot. I'll get him next time."

In the 1986 ALCS against the California Angels, there was a next pitch for Henderson
who was playing for the Boston Red Sox at the time, acquired in a late season trade with
the Seattle Mariners. Badly fooled by Angels closer Donnie Moore, Henderson and the
Red Sox were down to their  last strike in the game and the series.

Moore hung a split-fingered fastball just enough for Henderson to get the fat part of
the bat on the ball. As it sailed towards the left-field fence, Henderson watched in both
excitement and anticipation. He was like the kid and Little League staring at what could
be his first-ever home run. Henderson knew it had a chance. He skipped, hopped, and
landed awkwardly as the ball cleared the fence. I said to myself, 'man, that looked like
it hurt.' 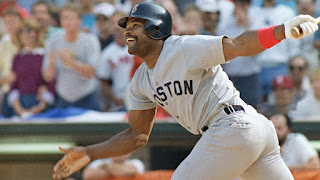 It very well may have, but there's no way Henderson felt any pain. The adrenaline took care
of it. He all of a sudden became that little kid who just did the greatest thing he could've
ever imagined with his parents and all his friends watching. He became a somebody.
The home run helped win the game and made Henderson a hero in Boston forever.

Henderson played in the World Series four times, winning once with the Oakland A's
in 1989.  Few people can rattle of the career stats of Henderson, but many remember his
fu Manchu and mega-watt smile. Dave Henderson loved the game every single day whether
he was on a hot streak or a dreadful slump. With Henderson, you could never tell which
one he was in the midst of. 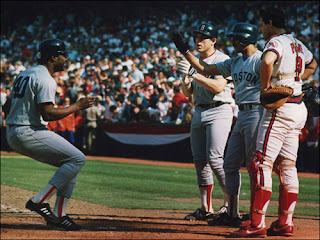 Henderson made every fly ball hit to him in the outfield, not an adventure, but rather
unique. When he camped under it, he gave it half of Rickey Henderson with a little style.
The other half appeared as if he was playing hide-n-seek with the ball, with a squint and a
little flex in his knees.

If he caught a ball that ended an inning, Henderson ran in from the outfield with a smile
on his face  looking as if his parents just told him they were taking him to Carvel after
the game for some ice cream.

The little boy in Dave Henderson had a great run, but he died on Sunday. He gave everything
he had and those who followed the game, a lot of joy. Somehow, someway, I pictured
a smile on the face of Dave Henderson as he passed away from a heart attack at the age
of 57. 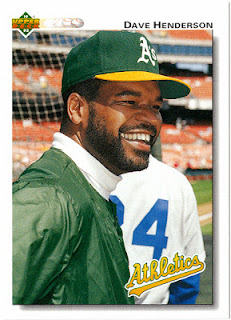 Nothing in the game could wash the smile off his face. Nothing in life seemed to affect it
either. It wouldn't be all that surprising if death failed at it, too.