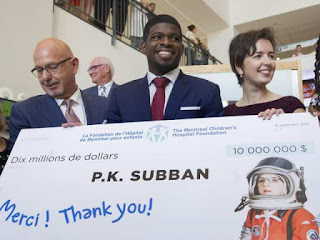 "In life I believe you are not defined by what you accomplish, but by what you
do for others,"  P.K. Subban.

In his brief 26 years on the planet,  P.K. Subban had been defined by what he does,
a beautifully skilled hockey player who took his talents to the NHL. But for the rest of
his life, the veteran of the Montreal Canadiens, Subban will be remembered for what
he did Wednesday.

Subban donated a whopping $10 million dollars to a children's hospital in Montreal,
making it the biggest philanthropic gift by a professional athlete in the history of the country.

For a children's hospital.

If Subban ever wins the MVP of the NHL or raises the Stanley Cup, it still won't be
enough of an accomplishment to surpass the one he achieved Wednesday. To the people
of North America, Subban is a hero forever. To make such contribution to a children's
is both jaw-dropping and beyond heartwarming. 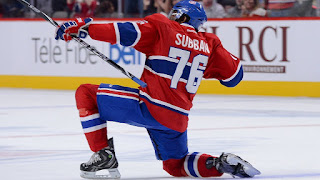 The $10 million donation will be made during the next seven years, and part of it
will be used to create a fund called "P.K.'s Helping Hands," which will provide financial
assistance to families of sick children so they can concentrate on caring for them instead
of worrying about how they will provide for their family while their child is in the hospital.

In a sports world that's been rife with scandal after scandal and poorly behaved athletes
like Ray Rice, Greg Hardy, Adrian Peterson, Lance Armstrong, and Tiger Woods, Subban
is a huge deodorizer that temporarily covers up the stench. He's the breath of fresh
air the world needs right about now. 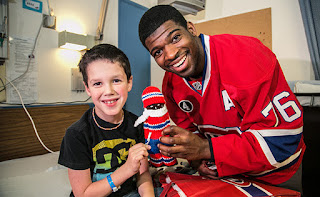 There are many, many athletes who make far more than Subban, who recently signed
an 8-year, $72 million contract, but few that will ever do what Subban did.

I have played and covered sports for nearly my entire life and my days of hero worshipping
ended when I was about 16-years-old. I admire and respect professional athletes for their
awe-inspiring talent, but I learned a long time ago, they are just human beings like the
the rest of us, complete with warts and imperfections.

P.K. Subban has changed that. I don't care what kind of hockey player he is, but his
gift to the hospital in Montreal, made him a person I respect and greatly admire.
He is professional athlete who truly "gets it', as evidenced by what he said at Wednesday's
ceremony.

"Sometimes I try to think, 'P.K., are you a hockey player or are you just someone
who plays hockey?' I just play hockey. Because one day I won't be a hockey player a
nymore. I'll just be someone who played hockey. So what do I want people to remember
me for other than being a hockey player?

"Well, every time you walk into this hospital, you'll know what I stand for."

P.K. Subban gets it. I just wish other athletes would "get it" as well. 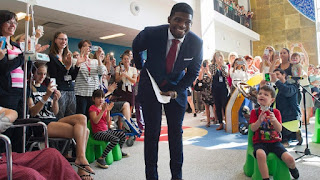