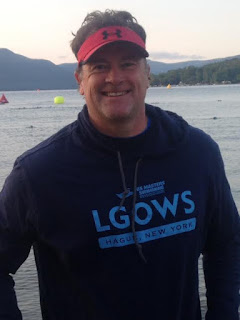 6.2 miles in the open water is a long way, making for a lot of time to think about
things. Long before I drew down my googles and jumped in Lake George for the
start of the marathon swim race, I knew exactly what I was going to think about to
help get me through this endurance challenge:

Rob Konrad and his epic, swim-for-his-life journey eight months ago

The former fullback of the Miami Dolphins fell out of his boat off the coast of Florida
and had just two options: sink or swim to safety. Trouble was, safety and land was nine
miles away. Nine long miles. He had to swim through the night with sharks circling around
him without having any food, water, or a competitive swimming background. Can't
imagine Konrad was liking his odds of surviving.

I just about came out of the womb swimming and swam competitively until I was
12-years-old. Years of mind-numbing double-sessions and the boredom that goes with
staring at a black line for more than 6,000 yards a day, was just about all I could handle.
I was cooked and said bye-bye to the sport. Or so I thought. 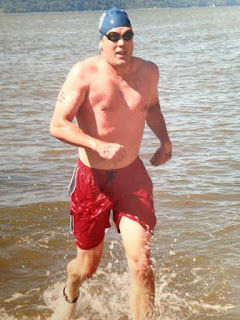 When I started my swim around Lake George, which is one of the cleanest, freshest lakes
in the world, I thought about Konrad and what he had to endure to make it back to
shore that January night in 2015. That was my ticket for getting through this grueling event.
I figured if a guy like Konrad could survive in the ocean's salt water and all that goes with
it, I could go the distance of 6.2 miles.

When the water got choppy on the way out to the turnaround point, I thought of Konrad
battling five-foot waves during his nine-mile swim. Now, that is tough. I grinded it out
the only way I knew how.  I just attacked it. Exactly a month earlier and less than an
hour away, I completed the iconic Ironman for a second time, which included a 2.4
mile swim.

Even at the age of 51, I can pretty much fall out of bed in the dead of winter and complete
a 2.4 mile swim in under 1:10. Swimming came naturally to me. However, I only spent
five sessions in the pool preparing for the 6.2 mile race in Lake George. Not finishing
was not an option. It was just a matter of how much time it would take me and what
shape I would come out of the water in.

Konrad finished his swim-for-life, nine mile journey in 16 hours basically because
he kept getting pushed around by the waves. He said he followed the lights on shore that
he saw through the darkness. I tried to follow my line of sight to each buoy flanking the
course, but I kept going of my mark.  I was incredulous to how Konrad could find his
way back to shore in the darkness in waves that were crushing him. 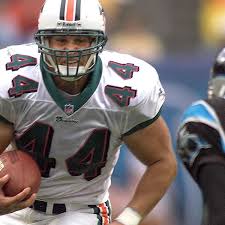 Many people were skeptical of Konrad's story but they didn't account for his incredible
will. They seemed to forget all he endured to be a college All-American, second-round
draft pick, and a man who survived six years in the dog-eat-dog world of the NFL.

Only the strong survive in that league. He was mentally tough, had a high-pain threshold,
and when he was in the Atlantic Ocean, Konrad was driven by one thing: seeing his
wife and three girls again. He didn't want them to have to grow up without a father.

I was hardly in any danger of losing my life, being fish food for sharks, or getting
hypotherma. Konrad got that plus severe dehydration, and a condition that sees the
fibers in the muscles break down. 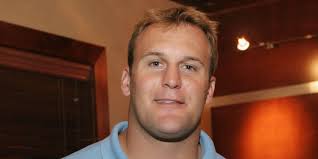 The only thing I battled during my 6.2 mile swim was a pair of burning shoulders. It
felt like someone was jabbing a red-hot poker into my rotator cuffs over the last two
miles of the race. Other than that, I actually felt great.  Thinking of all that Konrad
went through made the distance seem easy for me. If I were in Konrad's suit and had to
swim in the ocean at night and sharks circling, my heart would've jumped through
my throat.

My swim was a piece of cake and I loved every minute of it. Using Konrad's experience
during my quest to complete the race made it seem like a mile swim in the pool. 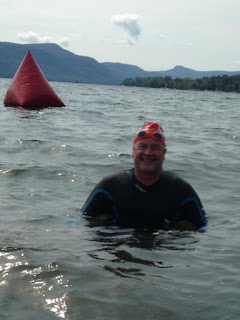 I came out of the water and crossed the finish line in a time of 3:21, which wasn't too
bad. I wasn't popping champagne but I was thoroughly satisfied with my performance.

I can't wait to do it again next year. I'm quite sure Rob Konrad didn't utter those words
after coming onto the shore in Florida that early morning in January.

There's a good chance he's telling everyone who will listen that anything is truly possible.
Posted by Paul Devlin at 4:35 PM