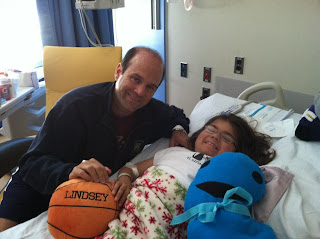 When Jim Duquette was the general manager of the New York Mets, he always looked for ways to improve his ballclub. He'd sign a player through free-agency or secure one via trade. Some of them worked out, others didn't. That's just the risk inherent with acquisitions.
On June 4, the longtime resident of Ridgefield, made the biggest trade of his career, one that came with high-risk, but more importantly, high-reward. But Duquette wasn't looking to improve his team, but rather, the life of his 10-year old daughter. Lindsey Duquette suffered from a rare kidney disorder (focal segmental glomerulosclerosis) and was in need of a new one. Her father stepped up to the plate and gave her one of his.
"It was excruciating and heartbreaking to see what she was going through," said Duquette. "Lindsey had no energy and would be on dialysis for 14 hours a day. She couldn't do all the things most girls her age were doing. After seeing all that suffering, it becomes an easy decision and to know that you can make a huge difference in the quality of your daughter's life, it's a no-brainer."
The procedure that gave Lindsey a new kidney took nine long hours. She's been back to the hospital with minor complications from the surgery and there is still a waiting period to see if her body accepts the new kidney. However, the trade of a kidney for hope and comfort already seems to be paying off.
"She said to me the other day, 'I feel great dad. I have a lot more energy," recalled Duquette. "That was one of the cool moments. To see progress like that makes it all worthwhile."
Duquette, who was also the general manager of the Baltimore Orioles during his career, says he's received a great deal of support from people in baseball and many throughout the country who've been touched by his story. Duquette doesn't feel that he's a hero in any kind of way, though, that title, he says, belongs to his daughter.
"She's so tough and resilent, we're really proud of her," said Duquette, who has two other children. "Lindsey doesn't complain about anything and she's actually helped other children in the hospital. This one girl was going to have a procedure done and Lindsay was telling her what to expect and that it wouldn't hurt that much. For a 10-year old girl whose been through so much to do that, is really special to us."
After recovering from surgery and making sure that Lindsey is healthy and in good hands, Duquette returned to his job as a baseball analyst with MLB Network radio just last week. When asked if this was the best trade of his of his career, Duquette laughed and said, "It's certainly the most important one I've ever made. If definitely puts things in perspective."
Posted by Paul Devlin at 11:34 AM