Before the four home run game on Tuesday night, the tape measure shots, and the demons and
drug addiction that almost derailed his life and career, Josh Hamilton was a ridiculously talented
player at a high school in Raleigh, North Carolina. He was on the radar of Major League scouts
as a freshman and by the time he was a senior, Hamilton didn't have to bother looking at colleges.
A major league team was going to make him an instant millionaire as soon as he was eligible for
the 1999 draft. 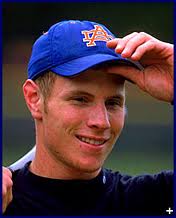 During the scouting process, a well-respected talent evaluator was assigned to check out Hamilton
prior to the draft. He worked for the Arizona Diamondbacks and prior to the game, the front office
of the D-backs told this scout to call them after watching Hamilton play in the first inning of the
game. Hamilton was scheduled to pitch and there was some debate as to whether Hamilton's
future in the game would be as a pitcher or outfielder. The left-hander could throw the ball through
a car wash without it getting wet and he just overpowered high school hitters.

In the game the scout was watching, Hamilton's first three pitchers out of his hand were 96, 96,
and 98 miles per hour. Those are the kind of pitches that high school hitters HEAR but don't see.
Hamilton struck out the side in the top of the first inning. He batted third in the bottom of the
inning and the crushed the first pitch he saw into the trees some 450 feet away. 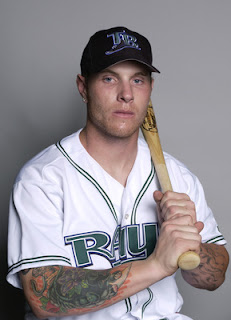 As per request, the scout for the D-backs made a call to the front office to let them know what
Hamilton did in the first inning. "Well, Hamilton hit 98 on the gun and struck out the side in the
first inning," the scout, in a slow, southern drawl told the people anxiously awaiting on the other
end of the line. "Then he hit a ball  that would've gone of Yellowstone Park in the bottom of
the first."

The D-backs personnel in Arizona weren't really all that surprised because they knew how
talented Hamilton was. But they pressed the scout to compare Hamilton to any other player
he's evaluated or seen in the big leagues. The scout responded, "Well, I'm not exactly sure,
to be honest with you." The front-office was incredulous that the scout couldn't come up with
at least one player that was comparable to Hamilton. "Come on," demanded the man on the
other end of the line. "There has to be someone who Hamilton compares to." There was silence
on the other end for a few seconds.