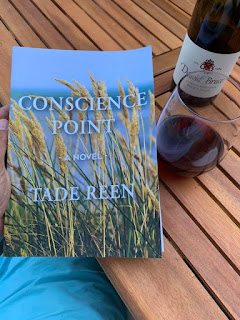 When I saw that Tade Reen was releasing his novel, "Conscience Point",  I said to myself, 'it has

to be a great read because that kid has one helluva imagination.' A few years ago, I received
an e-mail out of nowhere from Tade saying I stared him down on the busy streets of Manhattan.
I got a good chuckle out of that and was like, "Man, I haven't seen this kid in about 30 years
when he was an eighth-grader and by chance, we happened to cross paths in New York City.
I didn't even know what he looked like to stare him down."

Reed, who grew up in New Canaan, Connecticut, has used that fertile imagination to weave
his latest novel which was hatched while running in Southampton, New York where he has
summered since his childhood.

"This novel is based on the people, places, traditions and history of that area," Reen said
from his office in New York City where he works as a trader. "I'd been thinking about setting
a story there for years and as I was jogging around our neighborhood out there, I heard the
song, "Where the Night Goes," by Josh Ritter, which I'd never heard before. Suddenly, I had
the idea for the novel. It hit me like Lawrence Taylor used to hit Ron Jaworski. Hard."

Reen, who played football at New Canaan High for legendary coach Lou Marinelli, attacked
his novel like he did defenses as a tight end during his career on the gridiron.

"From the first words until publication, it took five years," said Reen, who also authored "Glad
Tidings", which was released in 2011. "They were five of the most eventful years of my life.
I wrote the book mostly on mass transit in New York. Subways, buses and eventually Metro
North Railroad once the family moved to the suburbs. It was my  daily mental recess," he added.
"I aimed for 500 words a day and most days I could hit that mark." 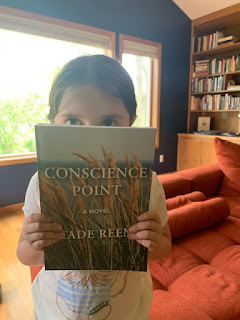 The book centers around the relationship between Rachel Jones, a well-educated hedge
fund executive who falls in love with Walter "Scallop" Koslowski, a local farmer. Reen
says the book is about how they try to see if their love can work despite being from
completely different backgrounds.

"I've always been intrigued by the idea that seemingly random chance encounters can change
people's lives forever, " Reen said. "It happens to all of us. We could meet someone on a train,
at a deli, or online through a friend, and that person's impact on our life could change not only
us, but the generations that follow."

One person who clearly made an impact on Reen's life is Mark Rearick, a legendary figure
and former baseball coach at New Canaan High School. A character in the book is based
off the man known to everybody in that tony little town as 2-5-0.

"I needed a strong connection between Scallop and Jonas, given it's his son's grandfather.
He was also Scallop's baseball coach," Reen added. "When I was thinking of a respected
baseball coach who everyone likes, being from New Canaan, I thought of the great 2-5-0.
I thought about 2-5's voice and his incredible knowledge of so many topics when I was
writing Jonas. How many college mascots can 5'er name? All of them. I wanted that in Jonas."

Readers will get all that and more in this wildly entertaining novel by Reen. He has a great
imagination when in comes to either describing chance encounters in New York City or a complicated relationship in the "Conscience Point."  There are lessons to be gleaned from
the book and Reen encourages others to embrace those chance meetings and not take
them for granted.

"It could be someone that we fall in love with, it could be someone who exposes us to a
new perspective on something, or that person can offer us a job," Reen says. "But we have
to be open to, and looking to make those connections. That kind of magic is alive and out
there in the world. And that's exciting and reminds us all that life is a wonderous, interesting,
adventure."

And just think - if I didn't stare Tade Reen down on the streets of New York City a few years
ago, this article would never have been written. You just never know.

"Conscience Point" is available on Amazon.com and in local bookstores near you.
Posted by Paul Devlin at 12:18 PM