ONE DAY FOR VETERANS IS NOT ENOUGH 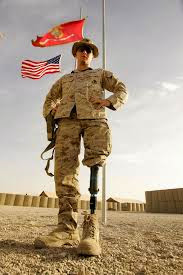 The nation honors all those who served our country fighting wars with their own special
day. We pay tribute to the men and woman who put their lives on the line against faceless
enemies in countries far, far away. There will be a few parades and a lot of pictures
flooding Facebook of the American flag and our heroes who did so much for us. They
helped attain what we all enjoy today: freedom.

For all the bravery, courage, determination, and sacrifice these veterans made, giving
them a day pales in comparison to what they truly deserve. And how our government
treats them is downright right embarrassing.

These men and woman leave the comforts of their home and the love of their families to
spill blood and sweat on foreign soil. What they return to is almost beyond comprehension.
Soldiers who had limbs blown off, their spirits shaken, and in many cases, their psyche
shattered forever, often have to wait long periods of time to get the benefits they earned
and the professional help they desperately need.

Instead of letting them go to the front of the line and take care of them immediately,
our government sometimes doesn't take care of them at all. Our presidents may give
them a pat on the back or weave together a few words of praise, but when the cameras
are off it becomes something barely more than a, "hey, good job, thanks for playing."

According to CNN, the average wait for those who served in Iraq and Afghanistan to
get their benefits is between 316 and 327 days. Almost a year!  That's absurd. All
the money the government spends keeping Guantanamo Bay open for terrorist
prisoners ($450 million a year) would be better served taking care of our own instead
of all the ones who tried to destroy our country.

Sadly, it seems a good majority of our country has more compassion for immigrants
trying to get into the United States illegally, than the men and women who actually fought
to protect it.

After the soldiers return home, turn in their weapons while trying to tune out the
horrors of wars, there is little waiting for them in terms of a career. They don't have
jobs waiting for them or counseling provided by the government to at least
help them find one.

A few corporations like Wal-Mart have pledged to hire up to a 100,000 veterans, but
it's not enough and the government should be doing a lot more. They ask soldiers
to make tremendous sacrifices, fight for our country, put their lives on the line, and
they don't have their backs when they return home.

Professional sports teams produce special Army fatigue uniforms which they wear
and sell for a nifty profit. The message is a great one: support our troops and veterans.
But what do they actually do for them? They, along with their families, should never
have to pay for parking, concessions, and tickets to the game. That should mandated
across the board by our government

According to a report in the New York Times, there are 22 suicides among veterans
every day. Yes, every day! One is too many. 22 is a terrible tragedy that can be
prevented. These men and woman need help. Sure, you trying going to war for
three years and have to kill or be killed. Is your job that stressful? I think not. These
soldiers have to come home, decompress, and then blend into society as if
nothing happened.

It's silly, absurd, and doesn't really make any sense. The government's motto should
be: "We take care of all those who take care of us." That's how it should
be, no questions asked.

Too bad it all can't be that simple. With our government nothing ever is.