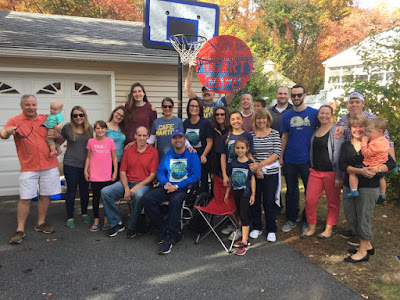 Boston already has a place to go where everybody knows your name, now it
has a spot to visit if you want to bring some cheer to a special person in the city.

Café Martin opened over the summer and has become a destination place for friends
of John Martin, a videographer at NESN, who was diagnosed with ALS last October.

"It has been a big boost for me and my family," Martin said from his home in Newton.
"I had been seeing a lot of people for lunch, but when I started slowing down, we just
started encouraging people to stop by."

And they've stopped by in droves to Café Martin. Or I should say, Café Martin at Piazza Adonis. 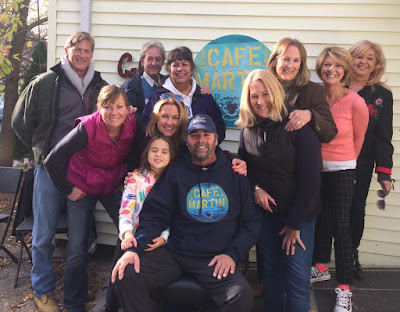 "One of my best friends was over and we had already coined the 'Cafe Martin' phrase for
the patio - and that tipped a hat to John's French background," said John's wife, Adrienne.
"And not wanting to be left out, I wanted a tip a hat to my Italian background, so my friend
decided  it was a cafe at a 'piazza' which means square in Italian. My nickname in high school
was 'Adonis'.  So, she coined the entire phrase 'Café Martin at Piazza Adonis' which is silly and
fun, much like us."


Thus, one of the hottest spots in Boston was born. 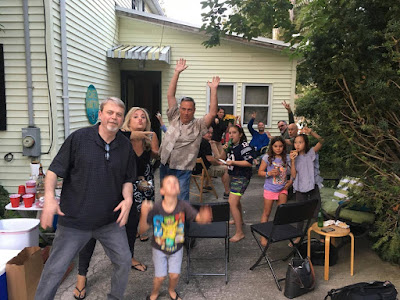 Athletes, celebrities, and friends of the Martin's have been visiting Café Martin at Piazza
Adonis, providing great comfort and a lot of laughs for JPM, as he is known to all his friends.

"It's been so fun and really meaningful that we are able to keep good energy flowing in our
home, in our lives and for John's spirits," she said. 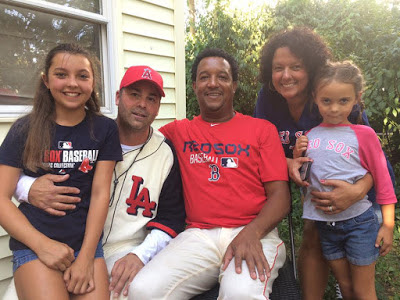 The highlight of Café Martin so far was the appearance of former Red Sox great and hall of
famer, Pedro Martinez. Martinez dropped by Café Martin before pitching in Steve Buckley's
Old-Timers baseball game on August 17. Martin had covered Martinez during his spectacular
run with the Red Sox.

"Pedro was awesome," Martin said. "When he arrived, there were about 20 people chanting,
"Pedro! Pedro! Pedro! He was kissing and hugging everybody. It was really a great scene." 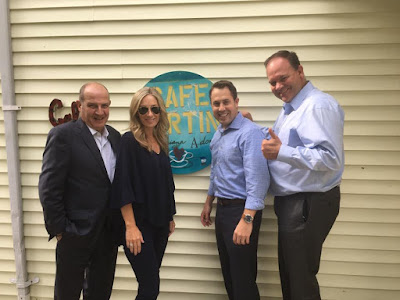 MLB Network followed Martinez on his trip to Café Martin and documented the beautiful
atmosphere and special friendship between Martin and Martinez.

Martin says he has a standing invitation to Bruins goalie Tukka Rask, whom he also
covered while working at NESN. "I texted him the other day. I'm hoping he shows up, too." 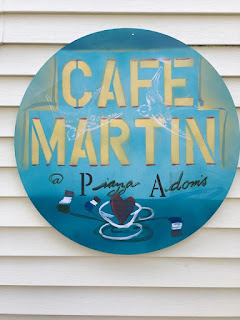 John's sister created the Café Martin sign that adorns his home. Longtime friend Bryan
Brennan produced the hashtag (#OnlyAtCafeMartin), and Facebook is now flooded with
pictures of all the friends who have visited Café Martin at Piazza Adonis. 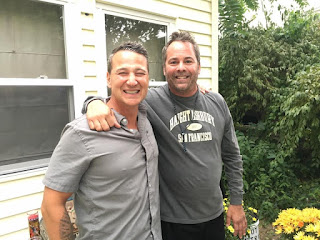 "We are so lucky to have so many great people in our lives to help support us and keep
John being John," Adrienne said. "We wanted create a social atmosphere for him because
it is one of the things he loves best, being with people, hanging out, talking and having fun."

This is love. This is friendship. This is Café Martin at Piazza Adonis. It's a beautiful thing.

Be sure to stop by. It's more than worth it.

If you'd like to support Café Martin at Piazza Adonis and JPM, please buy a t-shirt. Be sure
to hit this link:

100 percent of the proceeds will go to the John Martin Fund.