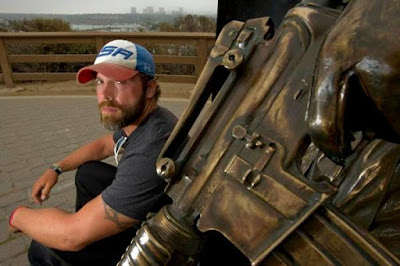 15 seconds into my interview with Mike Viti, I knew it was going to be one of the best ones
I've ever conducted. Viti isn't a household name, doesn't have a multi-million dollar contract in
his back pocket or rank as the most followed person in the Twittersphere.

No, he's none of that. Mike Viti is a true warrior and American hero. There aren't many of those
in this "look at me and my selfie" world we live in.

Viti is a combat veteran who served in Afghanistan. He was a military captain and earned a
Bronze Star for his courage and character in the global war on terror. Viti was also a four-year
letterman and captain of the Army football team during his senior year. 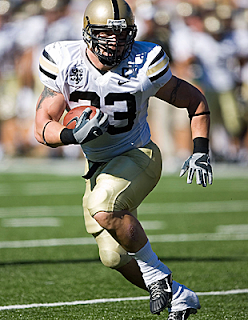 As we sat down on the West Point campus, which wreaks of history, honor, and tradition, I
expected something really special and I got it. In preparation for the interview, I scoured articles
and videos to get a better understanding of Viti. I knew that a disciplined, everything-close-to-the-
vest veteran wasn't going to warm up quickly to some reporter he had never seen or even
talked to before this afternoon. I surmised he'd have little time for someone who was unprepared, either.

My television feature story on Viti included the symbiotic relationship between sports
and service and how they might parallel each other when it comes to discipline, teamwork, commitment, sacrifice, and doing things the right way.

I am intrigued and in awe of anyone who has fought for this country. I admire all
those who have the courage to leave so much behind at home to fight against faceless enemies
a world away. To me, they are all heroes. Forever.


After we settled into our seats, our eyes locked on one another. I figured Viti would have no
interest in opening up to someone who had shifty-eyes and couldn't stay engaged. I was engaged.
This was a war hero. The adrenaline was flowing.

"What does it mean to you to have fought for and served your country?"  was the first question
I asked. There was a pause and his steely-eye stare could've bore a hole through my forehead.
This question was right in his wheelhouse. This is what he lived for. This is what he wanted to
tell the world about.

"It was the greatest experience and honor of my life," Viti said in a strong, deliberate tone.

I got chills and could see the goose bumps stand at attention on my forearms.

Viti talked about honor, courage, country, sacrifice, and commitment. He never looked down
and didn't blink for what seemed like 10 minutes. This was his life, his world, his reality. I
was fully engrossed.

After we talked about his military and football experience and the collision of the two worlds,
we moved onto a subject that was spectacular and close to unbelievable. 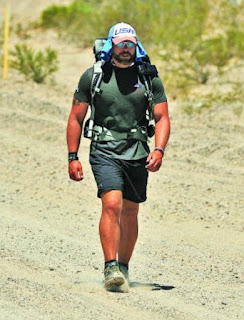 In 2014, Viti walked from Seattle to San Diego then across the country to Georgia and finished
up in Baltimore. He wanted to bring awareness not to himself, but rather Gold Star families and
the more than 6,000 people who lost their lives in the global war on terror since 9/11.

During his journey, Viti met with 67 Gold Star families. He often stayed at their homes overnight
and listened to parents, brothers and sisters, and children who lost a hero in the war. When he
wasn't taken in by a Gold Star family, Viti camped out under the stars. He walked through
Yuma, Arizona where the temperature reached 120 degrees. And sorry, while it may be dry heat,
temperatures that high can kill a person.

Viti started the journey at 240 pounds which was close to his playing weight and finished the
cross-country walk weighing about 185 pounds. Viti told me he got on a scale once during
the 232 day event and cringed when it read, 188. 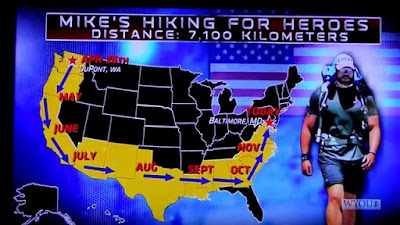 "It made me feel weak," Viti said. "I haven't been on a scale since then," he said. Viti is a
chiseled 195-pounds or so today. He doesn't have an ounce of fat on him.

Viti ended his journey at the Army-Navy game in Baltimore that year. Today, he's back at
West Point coaching fullbacks, the position he played for Army. I asked him about his future
aspirations.

What an honor to be in the presence of a former military captain and Bronze Star recipient.
That doesn't happen everyday and I was grateful for the opportunity to talk with and interview
someone who has given so much to this country.

Mike Viti is a true patriot, true warrior, and most of all, an American hero. 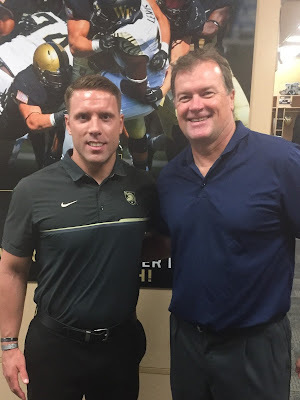