MEMORIES OF SPRING TRAINING. THERE IS NOTHING LIKE IT. 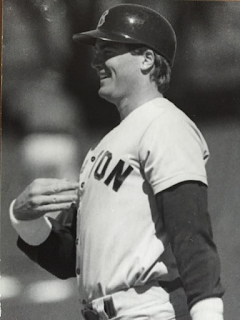 If you're a baseball fan, those seven words are simply beautiful. They mark the beginning of
a new season and unlock images of palm trees, chamber-of-commerce weather, and a tiny
slice of paradise.

As snow and sleet blanket the northeast while thick icicles hang from my window, playing
catch is seemingly as far away as the distance between Connecticut and Florida. Photos of
players reporting to spring training under sunburst skies dominate the news feed on Facebook.
Thoughts of  my first spring training flood my mind like the melted ice that will be unleashed
on our roads once the temperatures work their way into the 40's. 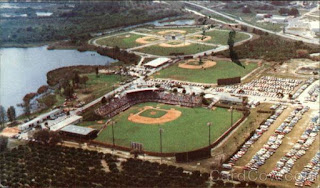 In early March of that year, I pulled into this sleepy town in central Florida with a mile-wide
grin on my face and the enthusiasm of a Little League kid playing in a real uniform for the very
first time. After a trying and unfilled career at UNC where I played three different positions
and started to switch-hit during my junior year, I signed with the Boston Red Sox on
Christmas Day.

I got a break because the team had lost Todd Pratt in the Rule 5 draft to the Cleveland
Indians. Pratt would eventually be returned to the Red Sox and enjoyed a solid 10-year
career in the major leagues with the Philadelphia Phillies and New York Mets.

It didn't matter to me how I got to the Red Sox and Winter Haven, but I was there and
enjoyed every single second of it. I was wearing a Boston Red Sox uniform and the catchers
helmet I was issued, had the 'B' on it. I still have that same helmet which fits nicely in my
closet. It has no value to anyone else on the planet, but that helmet, currently buried beneath
a bunch of old sweaters, is priceless to me.

Every day of spring training felt like Christmas. Everything is new. The uniforms. The bats.
The gloves. The spikes. And, of course, the baseballs. They are so clean and shiny they look like
pearls glistening in the sun. The air was remarkably fresh and the smell from the grass on the
perfectly manicured fields was intoxicating. The roads into the facility were lined with
palm trees and if there was a cloud in the sky during our four-weeks of camp, I never saw it.

What I did see was the best hitter who ever lived. Yep, Ted Williams.

The baseball legend was Red Sox royalty. He was a roving hitter instructor but may as
well have been God in baseball spikes to me. I was 22-years-old at the time and wasn't into
hero worshipping, but this was Ted Williams. I was in awe of the man. 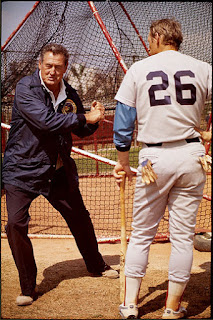 During the second day of spring training, I had been one of the last players to go into the
hitting cages that were perfectly placed in between the major and minor-league camps The cages separated the facilities but they were used by everybody, from Wade Boggs, Jim Rice, and
Dwight Evans, to the last player on the minor-league roster.

I had been hitting with one of the coaches when Williams stopped to watch me hit. I said
to myself, "You have to be kidding me." Then I heard the voice of God. It was a powerful,
booming voice that I had heard during interviews with Williams on television.

"Swing with a slight upper-cut. You need to get the ball in the air."

I stopped almost immediately when Williams said, "Come here, son."  I went over
to the netting that separated us and I looked at the Splendid Splinter in amazement. I
was just as impressed with what Williams did outside of baseball, as his Hall of
Fame accomplishments. Williams served two tours of duty as a brilliant military fighter pilot for our country. If he
didn't miss all that time, there is little doubt he would've hit 700 home runs. And this living
legend was giving pointers to a non-descript minor-league player.

Williams and I eventually walked out of the dark, dank batting cages into the magnificent Florida
sun. My grandfather, a former minor-league pitcher in the New York Yankees organization,
had traveled from Venice, Florida, to Winter Haven, to see me play. I don't think he was
expecting to see Williams.

I introduced Williams to my grandfather, who received an autograph from Williams, which
he'd send me many years later just prior to his death.

I said to myself, "I've been in spring training for two days, how the hell am I ever going
to top this moment in my baseball life?"

It wouldn't happen during the remainder of spring training, that's for sure. However, playing
baseball every day in spring training was pretty damn special and I soaked it all in like the
sunshine that beat down on us every day. 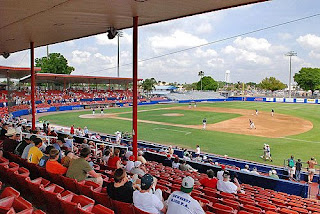 There were bus rides to places like Kissimmee and Haines City to play against minor-league
teams from the Astros and Kansas City Royals. I'd become teammates with those kids on the
buses, many of whom I am still friends with today.

There would be two more trips to spring training. One more to Winter Haven and one to
West Palm Beach with the Atlanta Braves organization. They were special as well. It's
spring training. There is nothing quite like it.

In 1995, I worked in Fort Myers as a sportscaster. The team I covered during spring training
just happened to the Boston Red Sox. They had left their long-time home in Winter Haven
for a spanking new ballpark in town. Ted Williams wasn't there, but a few of the guys I
had played with were.

They had reached the major leagues and I was there covering them. The memories came back.
The palm trees were there, so was the near-perfect weather, and hours and hours of baseball, of course.

Ah, it's spring training and there is nothing like it. Nothing.