WHY KAEPERNICK'S PROTEST IS A GOOD THING 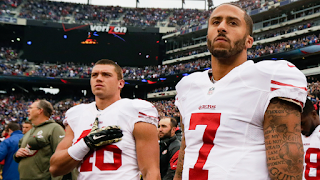 Someone on Facebook responded to a post I made concerning Colin Kaepernick and
his decision to sit during the national anthem before NFL games with the San Francisco 49ers:

"When it's all said and done, Kaepernick's protest will accomplish nothing."

My response was simple: It already has.

And you know what? That's a damn good thing for a lot of different reasons.

Oh, sure, when news first broke of Kaepernick dissing the national anthem, America
did what it does best: it went bat shit-crazy, overreacting, and talking stupid. That
can happen when the knee-jerk reaction is strong enough to split the uprights with
a football from 95 yards away.

My goodness. Some people act like Kaepernick committed mass murder, jeopardized
national security, or bilked the country out of its lifetime savings.

Many people wondered how Kaepernick can cry about oppression when he lives
in a country that's afforded him the opportunity to make 19 million dollars a year
slinging a football around. I believe they got that part wrong because Kaepernick
made it clear he is standing up for others who are being oppressed, not him.

Kaepernick was blistered for disrespecting every person who fought for this
country and protecting our freedom, which actually gives everybody the right to
protest and criticize those who do.

Stan VanDriver, a 12-year Navy veteran, told USA Today, "I and other veterans
fought so he could have his freedom of speech rights, so that all Americans can
have the right to free speech, the right to protest."

This from a person that actually fought for the country, the flag, for you and me.
Do you respect his opinion?

All of these issues needed be talked about and discussed. And everyone's
talking about them from legends and social activists Jim Brown and Kareem
Abdul-Jabbar to military veterans, law enforcement officials, and just about
every athlete in the sports world has weighed in on the subject, as well.

And that is truly a great thing.

Many people think Kaepernick snubbed his nose at the American flag, national
anthem, and patriotism when he chose to stay on the bench while everyone else
saluted them. Kareem Abdul-Jabbar said the protest was actually very patriotic.
People have different views on it, which again, is their right.

The outrage touched off by Kaepernick has actually shed more light on what
many African-Americans have had to endure in their lives and that flag and song,
no matter how beautiful and sacred it is to most, represents something completely
different to others, including Jackie Robinson, who faced more obstacles than
any athlete in the history of sports.

In his autobiography, Robinson wrote:

"I cannot stand and sing the anthem. I cannot salute the flag; I know that I am
a black man in a white world."

Whoa! I had never heard that before. That's from the immortal Jackie Robinson and
a history lesson right there. So, if you hate Colin Kaepernick then you must also hate
Jackie Robinson, right? I don't think many are willing to crush the legacy of 42, that's
for sure.

If you despise Kaepernick, then shouldn't you also despise the late Muhammad Ali
for refusing to fight for the country after being drafted? Just about everybody admired
Ali for "taking a stand", albeit years after Ali became a true legend. So, why are we
vilifying Kaepernick for what he did?

I am quite certain that for all their love Americans have for the national anthem, flag,
and country, most do not know all the lyrics to the song or understand what the 13 stripes
on Old Glory represent.

After Kaeperick's protest, I am thinking most Americans will become more attentive
when the national anthem is being played and that flag is unfurled. They will make
damn sure they know all the words and become better educated on what every stripe,
star, and color of the flag represents. Going to the bathroom  while the Star
Spangled Banner plays at a sporting event will no longer be considered.

On Memorial Day weekend next year, perhaps, people will stick around for a
parade and honor those who made the ultimate sacrifice, even thanking a veteran
for their service, instead of bolting to the Hamptons for a barbeque.

And that would be a great thing.

Some people had a problem with the method by which Kaepernick tried to send
his message. But what was he supposed to do to get everybody's attention? Tweet
something out? Post it on Facebook? Give me a break. He went big and bold and
got the world talking.

Perhaps, with Kaepernick's protest and the debates that follow, we will get a better
idea of what comes with all the rights the founding fathers crafted and every
member of the military fought so hard to maintain. And what true freedom actually
means.

Kaepernick may have cost himself friends, a fistful of dollars, and eventually, a
football career, but he may have done something positive that most of us may not
understand for quite a while.

He has forced us to think, debate, and perhaps, even sympathize. It may have
come at a great cost, but I believe this country really needed it.