BOSTON AND WHAT IT MEANS TO BE STRONG 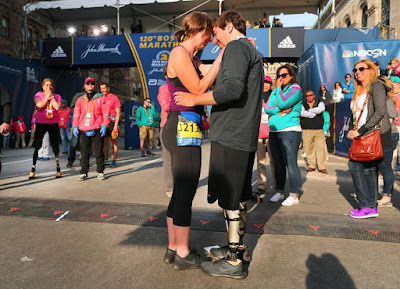 I grew up with ABC's Wide World of Sports. No matter where I was in the house, I always
rushed to the television set on Sunday to hear Jim McKay utter the words he made famous:

"The thrill of victory...and the agony of defeat"

As soon as McKay said "agony of defeat..." a ski jumper had the mother of all wipeouts,
losing his balance close to the end of the ramp, knocked unconscious, and seemingly headed
for the valley of death.

That image and those words became etched in my memory when I was a 6th-grader, the point
in my life where I knew exactly what I wanted to be: a sportscaster just like Jim McKay.

I'd eventually fulfill my dream of working in sports television, but as I moved through the
ranks and wound up in great cities like Boston and Atlanta, "the thrill of victory and the
agony of defeat"  became less and less important to me. I quit rooting for teams when I
was 16-years-old and my favorite teams were only the ones I was playing for.

As I became more of a grizzled veteran as a sports anchor, the scores became just something
I had to givefor those fans anxiously awaiting for them. (Yes, this was long before the
Internet provided everything instantaneously.) 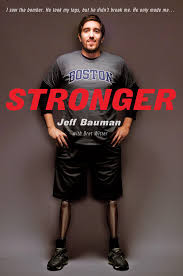 The human drama became my fascination. I was near-obsessed with telling how athletes
overcame obstacles and adversity to find success in high school, college, and professional
sports. I loved bringing the emotion of it all to viewers, giving the blood, sweat, and tear
count of the athletes, and the sacrifices they made to achieve their dreams.

When I was perusing all the pictures of Monday's Boston Marathon, there was one that
jumped off the page and encompassed everything I love about covering sports and the
human spirit.

Jeff Bauman, who had his legs blown off in the marathon bombings in 2013, was captured
by a photographer embracing his wife, Erin, who had just crossed the finish line.

What a powerful photograph. What a tsunami of emotions.

Erin was running in the 2013 Boston Marathon but didn't get to finish because two homemade
bombs rocked Boyleston Street, just before the finish of the 26.2 mile race. People died,
lives were forever shattered, and Erin's boyfriend at the time, lost his legs--and nearly his
life. 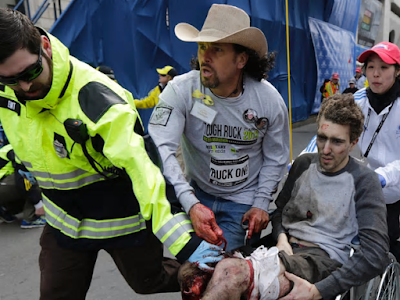 The photo of Carloa Arredondo, who became known as the man in the cowboy hat,
rushing Bauman to the hospital while holding an artery in Bauman's leg so he wouldn't
bleed out, became the iconic photo of that terrible event.

Like the skier wiping out on the Wide World of Sports, it's one that I will never forget.
It's become part of the fabric of the Boston Marathon and helps define the city as tough,
courageous, and caring.

The photo of Bauman and his wife is another one that has been seared into my memory.
There is Jeff, with two titanium legs, sharing a moment with his wife who finished the
marathon in just under six hours without even training for it.

The picture illustrates love, strength, resolve, and most of all solidarity. It shouts out
loud that no matter what happens to us in life, we can never be broken. Everybody else
may move on and forget about us until next year, but we will always have each other,
no matter what.

It says we are Boston Strong. Terrorists can try to attack and disrupt us, but they will
never get the best of us. This is our city. They can take away my legs, but I am stronger
than their strength.

Most importantly, the picture says, don't feel sorry for us. We are OK. Our lives have been
changed forever, but we are changing it for the better.