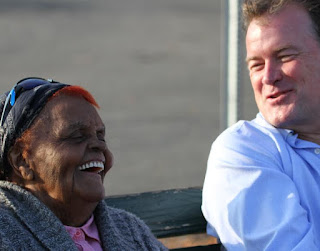 I crashed a party on November 6th and it's one of the best things I've done in a while.
During the midst of reporting on a story about the temperatures in New York shattering
a mark that stood since 1885, I happened upon a petite lady whose years, 85, seemed to
match her bodyweight.

Ms. Henrietta, as she introduced herself, was sitting on a park bench on a near perfect,
sun-splashed afternoon. She was the center of attention as her son, daughter, and two
grandchildren surrounded her, joyfully trying to make her birthday, a special one.

There was a small cake drenched with vanilla frosting and a few gifts already unwrapped,
resting against the concrete base of  a bench that had little trouble supporting her. There
was something about Henrietta that fascinated me. It may have been the big smile or the
deep grooves in her forehead which were like the rings of an oak tree. There were many
which indicated she had been around for a while. Henrietta was born in 1930 and her
soulful eyes with a tinge of sadness, screamed out loud that she had seen a lot in her
lifetime, not all of which was good. 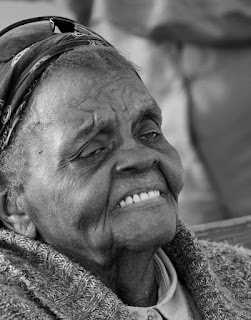 I sat next to Henrietta on the park bench, microphone in hand, ready to capture a few
words that would certainly give a little more joy to my story. There were moments when
Henrietta would just stare out at the small ripples on the Hudson River, the only things that
could smudge an otherwise, Chamber of Commerce day.

Born during the Great Depression era, I couldn't imagine the things Henrietta and her family
may have gone through. As a teen, she lived through a brutal period where blacks in
this country were heavily discriminated against. No, Henrietta didn't need to write
a book with pictures to let the world know life had not been easy. You just knew. She
didn't wear her heart on her sleeve, it covered every inch of her face. 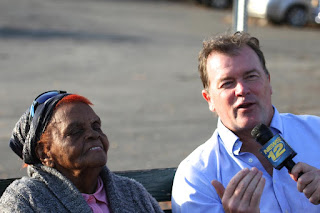 Henrietta became a big part of my day and I needed to find a way to make her part of my
story. She was a true gem and one of those people who can put a smile on a face without
saying a word. Not a single one.

It was 78 degrees on November 6th, a spectacular day to celebrate an 85th birthday. I asked
Henrietta if she had ever experienced a day like this one on her birthday.