FLAG DAY AND THE GREATEST SAVE OF OLD GLORY 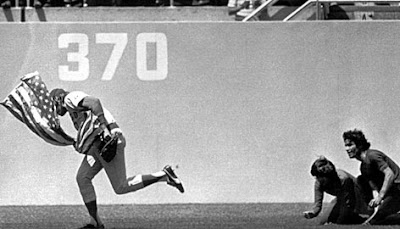 Few things instill as much pride in our country as Old Glory.  With 50 stars, 13 stripes, and
the best-looking color combination in the spectrum, she is nearly perfect and quite powerful
It is raised for Olympic champions and a staple of nearly every college and professional
sporting event in the country.

Today, we celebrate Old Glory and the 238th birthday of it with flag day. It will always
be considered sacred and everyone who has one is responsible for taking care of it, protecting
everything that it represents.

However, that wasn't the case during a baseball game on April 25, 1976 between the
Los Angeles Dodgers and Chicago Cubs. A father and his 11-year-old son ran onto the
field and attempted to set it on fire as a protest to the United States, which was reeling
in crisis. Rick Monday, a centerfielder for the Cubs as the time, sprinted toward the duo
and snatched it before they could torch it. 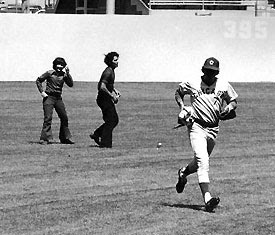 It was a great moment for our national pride, baseball, and Rick Monday, who became
somewhat of a hero for doing the right thing at the right time, preserving a piece of
perfection.

After the game, Monday said, "If you're going to burn the flag, don't do it around me.
I've been to too many veterans' hospitals and seen too many broken bodies of guys
who tried to protect it."

With the social media, talk radio, and 24-hour new channels the way they are today,
I'm fairly certainly Rick Monday would be a household name if he saved that flag in
2015 instead of 1976. 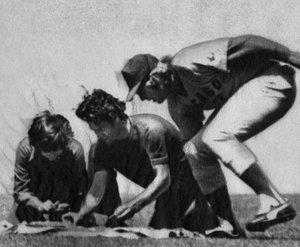 Ironically, Monday was traded to the Dodgers the following Winter and Los Angeles
had a real hero to celebrate and honor.

Happy Birthday, American Flag, and thank you, Rick Monday.
Posted by Paul Devlin at 10:06 AM