THE GENIUS OF RICHARD SHERMAN 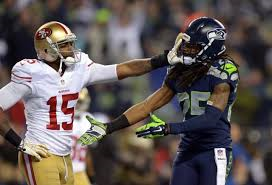 Richard Sherman, Richard Sherman, and more Richard Sherman. I'm pretty sure we'll
be hearing about the All-Pro cornerback from now up until the Super Bowl. I'll bet that
outside of Peyton Manning, Sherman will be the most popular player at the circus known
as media day. While the squeaky-clean Broncos quarterback will be the star leading up
to the biggest game of the year, Sherman is on his way to being the biggest freak show.

But say this about Richard Sherman: He may be arrogant, obnoxious, and low-class, but
the Stanford man is a pretty smart guy because he's figured out how to feed the media
monster and become a household name in this NFL-obsessed country.

In Sunday's post-game interview, Sherman went on a rant and called Michael Crabtree of
the San Francisco 49ers a 'sorry' wide receiver. He supposedly said a few other things to a
few other networks, but I didn't hear them, because I hit the 'off' button on my TV clicker.
On Monday, Sherman's post-game hate-fest flooded the Internet, sports talk radio, and
every still-existing paper in the country. He even authored a column for SI.com on why he
said what he said about Michael Crabtree. 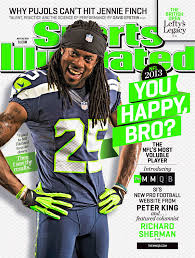 Yep, the media rewards people for being controversial, colorful, and often times, downright
right despicable. Television executives do it all the time as well. Heck, CNN gave Elliot
Spitzer, the former governor of New York who resigned after his scandal with a hooker, his
own television show! Is this a great country or what. Same thing happened north of the border
after Toronto mayor Rob Ford was outed for being a crack-smoking, foul-mouthed, near-
frat boy politician. (Although, Ford never resigned. )

The media nor television executives care that much about morality and character because,
after all, it's all about the ratings. Athletes who don't deliver the great sound bite or call
teammates or opponents out, don't usually get calls to be on "PTI", "Around the Horn"
or be the subject of ESPN's "Sunday Conversation", unless they are Manning, Brady, or
Derek Jeter, but there are so few of those athletes around in today's, "You-Face-Twit" world.
(that's short for YouTube, Facebook, and Twitter, if you're scoring at home.) By Tuesday, I'm sure just about every significant media outlet in the country will have
called the Seattle Seahawks public relations department requesting Sherman for an interview.
It's how it works. Producers often feel they have to get someone who is colorful and
with an 'edge'. You know, that athlete who is "trending" or in the Buzzfeed.

Sherman knows how to play the media, that's for sure. He plays cornerback in Seattle, which
is pretty much non-existent to the people outside of, well, Seattle. Sherman wears dreadlocks
just like every other defensive back in the league and he's far from being happy with just
being an All-Pro. He wants to be an 'it' guy and get all the attention. And how may I ask is
he going to accomplish that without tooting his horn or yanking the chain of others?

Sherman's rant to Erin Andrews of Fox has made him Stephen A. Smith with dreadlocks.
He is a man most of the country loves to hate but man just about every producer has to
have in their sports television program. 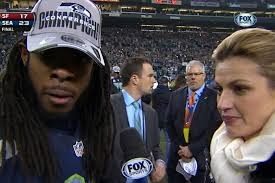 Two weeks before the Super Bowl, Sherman is getting the attention he feels that he deserves.
There will probably be appearances on the Late Night talk show circuit, television commercials,
and a bigger contract down the line. That's how it works these days, doesn't it?

Sherman's behavior isn't exactly worth of being a role model, but I don't think he cares one
bit about that. I'm sure a lot of high school kids doing post-game interviews will feel inclined
to diss an opponent or thump his chest like a buffoon because after all, Richard Sherman
did it. He's in the NFL, so they can do it too.