MY 'VICTORY' IN THE NYC MARATHON 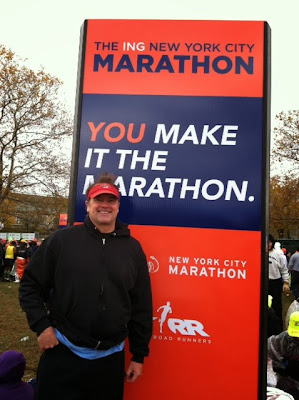 In the weeks leading up to the NYC Marathon, I said I was going to beat the Kenyans, win
the endurance race, and have a parade down the Canyon of Heroes to celebrate. This near-50,
pasty-white, painfully slow man was going to shock the world and beat 50,000 runners to
the finish. Yes, I said it all.

Just 21 days before the marathon and less than 48 hours after I secured a spot in the race, I
suffered a lower leg injury during the last 50 yards of an 18-mile run. It was my last long run
leading up to the marathon. I shut everything down because I didn't want to break the cardinal
rule of running: make sure you don't get injured on the way to the starting line. I wondered
how the heck I was going to run 26.2 miles when I wasn't sure if I was even going to be healthy.
I wondered how I was going to finish my first-ever marathon when I ran a total of five miles
in the three weeks leading up to the event. 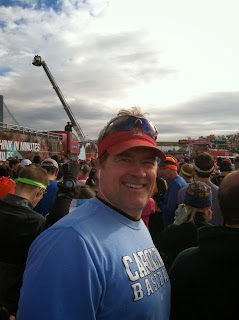 I didn't lie to myself, but I lied to my mind. They are not one and the same.  I covered a golfer
at Penn State several years ago and he was down four holes with six to play in a match-play tournament.  After he came back to win, I asked him what the heck he was thinking. He said,
"I lied to my mind and tried to trick it. I said I was playing really well and I was going to win the
match and I did."

That's why I posted on all messages on Facebook. I had to see it in writing, have people doubt
me, challenge myself, and most of all, believe I could do it. And there was no way I was going
to miss the opportunity of running in the great New York City Marathon. Nobody is promised
tomorrow and I sure as heck wasn't going to wait a full year to run this race.

The adrenaline rush as the howitzer went off to start the race, along with the feeling of running
across the Verrazano bridge was truly amazing. If there was any pain in my leg, I sure as heck
didn't feel it. 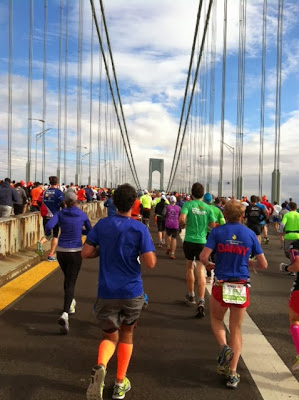 Running through the streets of the five boroughs of NYC was just flat-out incredible. People
you had never seen before and certainly didn't have any ties to, were screaming wildly. I wore
a "Carolina Baseball" T-shirt, showing the pride in the school I graduated from. I quickly found
out how many people love the University of North Carolina. There were shouts of "Tar"..
followed by "Heels", a famous chant that all graduates of the university in Chapel Hill know
all too well. It kept me going and fired me up.

Almost as amazing as the race itself, was how the organizers could track 50,000 runners
and all their split times. I know technology these days is off-the-charts, but to be able to chart
the progress of every runner for 26.2 miles and post it instantaneously in real-time, is truly mind-boggling. Below is my chart from the race. As you can see, I had a good pace going. I hit the
half-way mark at just over 1 hour and 49 minutes and was well-within reach of my goal of
3:47. 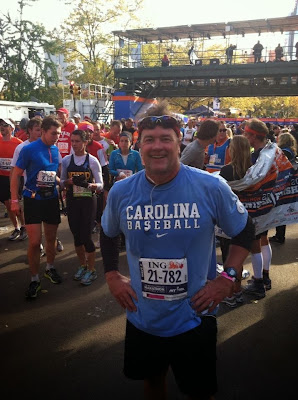 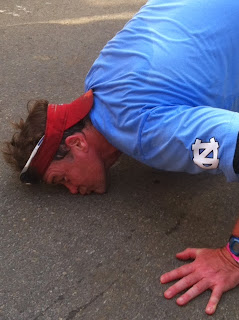