The magic carpet ride of Jim Nantz has ascended to a level where
only a few sportscasters have ever gone before. Last week the Pro
Football Hall of Fame announced the long-time voice of CBS Sports
would be the 2011 recipient of the Pete Rozelle Award, which recognizes
exceptional contributions to radio and television in professional football.

"It's one of the biggest honors of my career," said Nantz, who is a
New Canaan resident. "In our industry it doesn't get any bigger than this.
I wasn't expecting it and when I received the call I was really blindsided." 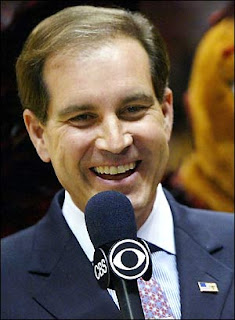 At 52, Nantz is the youngest person ever to receive the award, launching
him into rarefied air among sportscasters. This honor, along with the Curt
Gowdy Media Award presented to him by the Basketball Hall of Fame in
2002, makes Nantz just one of three sportscasters to be recognized by the
pro football and basketball halls of fame. Gowdy and Dick Enberg are the
others.

"When they told me that, I had to sit down for a minute," said Nantz,
who played golf at the University of Houston. "I feel like I'm still a young
man and to be in the company of legends like Gowdy and Enberg is a
tremendous honor."

Nantz got his start in the business while he was a junior in college.
He'd anchor the weekend sports at the CBS affiliate in Houston. It didn't
take long before Nantz caught the attention of television executives at
headquarters in New York. 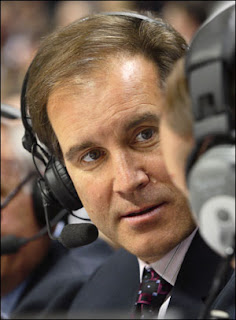 "Ted Shaker, who was the executive producer of CBS Sports, took a
giant leap of faith in me," said Nantz. "I was just 26 years old and being
a network anchor at that age was unheard of. Shaker really believed in
me and my ability to do live television on a network. It was risky."

Nantz rewarded Shaker's faith in him by becoming one of the most versatile
and talented sportscasters the industry has ever seen. He makes the seamless
transition from the NFL to college basketball to golf and is a five time
winner of the National Sportscaster of the Year award.

He has worked on the NFL since 1988 and has been part of four Super
Bowls as a studio host and play-by-play man. But when March comes
around, Nantz really shines. He goes from the madness of the NCAA
tournament to the awe-inspiring sights and sounds of the Masters.

"I really pinch myself every year when I go through that stretch," said
Nantz. "People at the Final Four say, 'And after this you go to the Masters?
That's unbelievable', and it really is. I never take it for granted or have
a sense of entitlement. I realize how lucky I am. But I also have worked
really hard and got to where I am through my preparation." 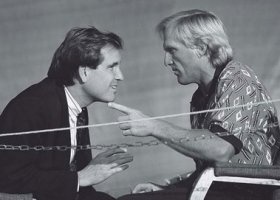 Nantz has experienced a lot of shining moments in his career with CBS
Sports. He was on the dance floor when a Cinderella named Butler almost
beat Duke for the national title. When Tiger Woods burst onto the scene
in 1997 with an earth-shattering performance at the Masters, Nantz was in
the tower calling "it one for the ages."

But it was the 2010 Super Bowl in Miami that holds a special place in
his heart. "When I was eight years old my Dad took me to the Saints first
game in the NFL," said Nantz. "It was the birth of the Saints and to follow
them to their culmination as Super Bowl champs, after all the organization
had been through, was really special. Calling their victory over the Colts
is one of the most prideful moments of my career."

Anyone who has watched golf on CBS, knows how much pride Nantz takes
in his work on the Masters. After 26 years calling the action, he has become
as much a part of Augusta as the Azaleas and Amen Corner.

Nantz had made it known that his goal was to cover 50 Masters tournaments
in his career. But that changed recently, when he was presented with an
award by broadcasting great, Jack Whitaker.

"Jack was saying that he wanted to see me around for the 100th anniversary
of the Masters. My goal was 50 years but that would take me to the 99th Masters.
I want to be there for the 100th, which will be in the year 2036."

Nantz will be 76 when the Masters celebrates its 100th anniversary,
which is an age when most broadcasters not named Enberg and Mike
Wallace, have long been retired. But Nantz has accomplished everything
he's set his mind to and fullfiled every dream of his when it comes to
broadcasting. It wouldn't be wise to bet against him on reaching this goal,
which is like the Masters tradition itself: unlike any other.
(Editor's Note: Ted Shaker is married to New Canaan Patch editor Sheryl Shaker.)
Posted by Paul Devlin at 7:49 PM