JULES ALEXANDER: A PHOTOGRAPHER UNLIKE ANY OTHER

On the journey through life there are people who you come across and meet that just have "it".
It could be their personality, magnetism, or some type of gift they are blessed with that separates
them from others. They are the ones that you love to be around because they can put a smile on
your face and make you laugh when you're not really in the mood to do so. Jules Alexander is
that type of person, the one who has "it". He's as unique as his first name and as great as his last one.

But unless you're a pro golfer or one of the many of thousands of  friends of his sons, Paul and Carl,
you probably don't have any idea who Jules Alexander is. Alexander is a professional photographer
who has been taking pictures for more than 70 years. He's put his lens on the likes of John F. Kennedy, Frank Sinatra, Benny Goodman, Christie Brinkley, and a young, before he-was-famous, Mike Tyson. 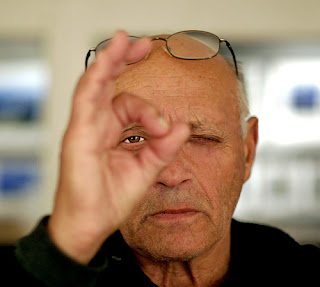 But it's golf photography that's been Alexander's passion and expertise. He captures the sport
of golf like Annie Leibowitz frames up celebrities. Alexander does it with a style that's all his own, his pictures not only tell a story, but they just about come to life.

The photos taken by Alexander jump out at you. They don't scream for your attention, but they
do demand it.  He is old school, prefering  black and white over color. It's one of the things that's made Alexander unique.

In mid-June, just days after his 85th birthday, Alexander was in Maryland  snapping photos of a young  Rory McIlroy in the U.S. Open. 52 years early, Alexander was at golf's national
championship taking pictures of a man, which he didn't know until more than 20 years later, would change his life forever, turning him into one of the sport's most famous and recognizable photographers. 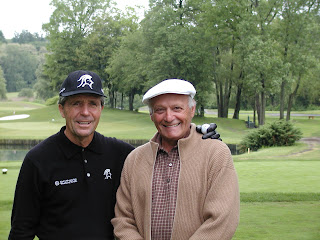 In 1959, Alexander, a Bronx native, made the short journey to the Winged Foot Country Club to photograph Ben Hogan. Alexander was fascinated with just about everything the legendary golfer did.
He studied his swing, how he stood, the way he dressed, and even the way he took a drag on his
cigarette. Alexander would build a collection of Hogan like the tradition of the Masters: Unlike any other.

Years later, Alexander and his lovely wife, Danna, moved to Harrison, New York. His house sat
at the end of the driving range of the Westchester Country Club, which hosted a PGA event for more
than 40 years. Players on tour got wind of Alexander's Hogan collection  and they'd show up on his doorstep to see them.

Players like Ben Crenshaw and Gary Player would stop by to gawk and study the photos because
quite frankly, there was nothing else like them. It wasn't until 1989, that Alexander, with a nudge from his son Paul, put the wheels in motion to show the rest of the world the Hogan photos. A
book was created  called the "Hogan Mystique" that put Alexander on the map. 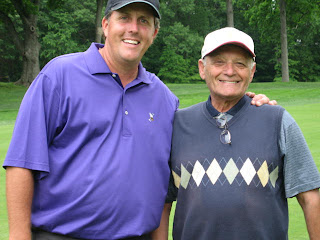 The work and offers came in like a Tsunami for Alexander. Mastercard  hired him to take a
team picture  of legends like Nicklaus, Palmer, Player, and Watson. Hugo Boss hired him to photograph Phil Mickelson for their print adds. He travels the world every year to shoot a
calendar with the greatest and most picturesque holes in golf.

It only took 40 years, but Alexander became an overnight sensation. Ask anybody in golf  if they know the guy with the collection of Hogan, and  you'll most likley get a "Of course, I know Jules." Like most of the great ones, Alexander is known throughout the sport by just one name, Jules.

Well, that might be stretching in a bit. You see, Jules had this almost, maniacal obsession with
Ben Hogan. He studied and copied his swing, dressed like him, and even wore the signature style
of hat Hogan wore. His golfing buddies at Westchester  Country Club nicknamed him "Hawk",  which of course was the moniker of Hogan. As you can imagine,"Hawk" ate it up, he just loved it. 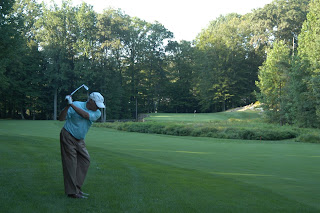 Alexander became a single-digit handicap golfer who shot 76 when he was  79 years of age. His sons,
Paul and Carl, are two highly-respected PGA club pros in Westchester. Carl qualified and played in the Westchester Classic, the tournament he had grown up watching, and is considered one of the best
golfers in the tri-state  area. Alexander's grandson, Jack, is also a very good player. It's a true golfing family. 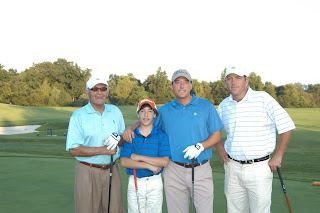 Jules and the Alexander's are like family to us. We have known them  for almost 40 years and
nearly every picture that was hung in our house growing up, was taken by Jules. The same could
be said for many of Jules' friends. Nobody ever asked Jules to take the picture, he always was
quick with the camera and the offer. He took as much pride in taking a shot for a friend as he did when capturing magnificent shots of Hogan, Nicklaus, Player, and Crenshaw.

Jules always had the picture in his head, often well before we were  ever in position to take it. Like Wayne Gretzky was known for, Jules could see the play happen long before it developed. In 2001, Jules saw a picture in his head that stands as my all-time favorite.

My dad, Jules, and I were playing a round of golf at the Westchester Country  Club. As were
walking off the 12th tee, Jules said, "sit on that  bench, I've got this great shot that I want to take."
He already seen this shot a million  times in his head. My dad and I, who were best friends,
followed Jules' instruction on how to sit. With one click, Jules captured a picture that will stay
with me forever. My dad died a few years afterit was taken, so you can imagine how much the
picture below means to me. 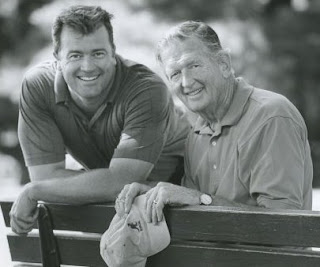 crowd and bring people to the edge of their seats. You only need to meet Jules once to know
that he is special and unique. People that meet Jules Alexander, never forget him.

Alexander served in World War II as an aeriel reconnaissance photographer and  ended up as
a world renown golf photographer. He's had a truly  interesting life  and he's really enjoyed
living it. Jules is 85 years old but looks like a man 20 years younger and acts way younger
than that.

The lens doesn't focus on him too much, but when it does, it captures a man who has "it".
Posted by Paul Devlin at 10:00 PM