BASEBALL ACCORDING TO "THE ECK"

As a pitcher during his Hall of Fame career, Dennis Eckersley was
definitely unique. He had the long-flowing hair, the Marlboro man mustache,
and that funky delivery. He was bold, brash, and pretty much a rock-star in
cleats.

Not much has changed in Eckersley's post-playing career. Working as
an analyst for NESN and TBS,  he comes across the same way he did as
a player, making him one the best, and most entertaining commentators in
the game. 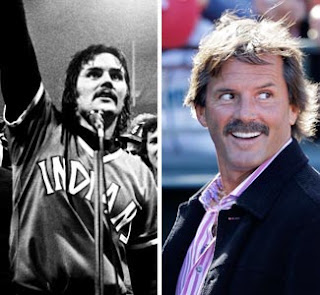 "I love it, man," Eckersley said from his home in Sudbury, Mass. "It's an
adrenaline rush that comes as close to you get when you're playing. When
you're on live, you have to be spot on, just like closing out a game."

Eckersley, who saved 390 games and won another 197 during his
24-year career, brings not only a unique perspective to the game, but
a different language to his viewers as well. 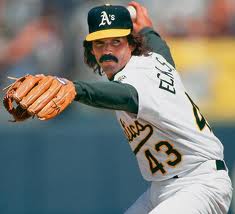 There is "going bridge" (home run), "hair on a fastball" (serious heat)
"tossed salad" (junk-balls) and words like "iron" (money), and "cheddar"
(fastball).

"I picked all that stuff up 30 years ago, when I used to hang out
with Pat Dobson on the Indians," Eckersley said. "Those are  just every
day terms used in baseball  by a lot of guys. I guess I'm one of the only
ones to use them on tv."

Eckersley is not the same person you think you know from television
or remember from his playing days. He's the most unaffected and
unassuming Hall of Famer that  you'll ever meet. But  it was one moment
early in his career, that earned Eck a reputation that he's never seemed
to shake.

"In the game where I threw a no-hitter against the Angels, there were
two out and the fans were going crazy." Eckersley recalls. "Gil Flores
was taking all day to get into the batters box, so I screamed at him
to get in the box. I said, 'the cameras aren't looking at you. They're looking
at me'. From that point on, I was the cocky pitcher who was pointing at
everybody."

Eckersley broke into the game at age 20 and finished when he was 43.
In between, he tossed that no-hitter, captured Rookie of Year, won
the Cy Young and MVP award in the same season, and became a
World Champion with the Oakland A's, which stands above the rest.

"You have to understand. I pretty much grew up at Candlestick Park
watching Willie Mays," Eckersley, who was born in Oakland, recalled.
"To be in that park with the ball in my hand and touching first base for
the last out in the World Series. That was the highlight of my career." 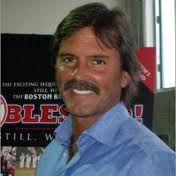 One of the low-lights could have been serving up Kirk Gibson's
earth-shattering home run in the 1988 World Series. But Eckersley
always took the good with the bad, and moved on from that devastating
moment rather quickly.

"Man, I had been styling. I just had saved four games against the
Red Sox in the ALCS,"  Eckersley said. "I gave up that home run but
it didn't really bother me. I had so much of my career left and was really
just hitting my stride."

Eckersley recovered from that moment to finish strong and earned a
place among the immortals in Cooperstown. But for all his success,
Eckersley does have one regret.

"I wish I had enjoyed it more," Eckersley says. "But there was so
much pressure  and I was always felt I had to be perfect because
I couldn't stand failure. I had coaches  say, 'go have fun out there'.
I was like, screw that, this is serious stuff. But I do wish I just enjoyed
the ride more."

Eckersley is enjoying life fully now. He's happily married and a
Hall of Famer. He's conquered his alcohol addiction and is a critically-
acclaimed baseball analyst for the Red Sox television network.
Yes, life is good for "The Eck".
Posted by Paul Devlin at 2:54 PM