REMEMBERING FRIENDS WHO PASSED AWAY IN 2012 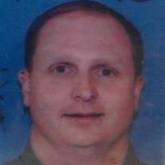 FRED TRUMPLER  April 5
Fred Trumpler died way too young on April 5. He was just 47 when he suffered a

massive heart attack while holding one of his children in his arms. Trumpler
died as he lived, caring for and loving others. That's the kind of person Fred Trumpler
was.

During his days at New Canaan High School, he wanted to be everybody's best
friend and would not only give you the shirt off his back, but his pants, shoes, and
coat, as well. Trumpler expected nothing in return. His friendship was unconditional.

Trumpler loved football. Actually, lived for it. He wasn't blessed with extraordinary
talent, but he played with heart and a burning desire to win. Trumpler didn't care
about personal accolades as much as he did of being part of a great team. All he
wanted in his football career was to say he was part of state championship team.
Trumpler's dream came true in 1983 when New Canaan High School won it all.

I often wondered if he slept in the state championship letter jacket he received.
Trumpler wore it all the time, even as the calendar turned to late spring and the
temperature hit the 80's. Trumpler was so proud of it and he always considered it
his greatest accomplishment in football.

Fred Trumpler was a true character in football and in life. He is missed by the
many teammates and classmates he came across and touched in his own special
way.

ROBERT TROUP  November 12
Robert Troup was a fixture at just about every sporting event the New Canaan
Rams played. Sporting his long, camel-hair coat with a scarf draped around his
neck and often a resting place for his flowing white locks, he stood on the sidelines
and supported every team in town.

Nobody really knew what Troup did for a living and I never really cared. It added
to his character and intrigue. A World War II veteran, Troup appeared as if he
had seen it all, which he probably did. He was friends with movie stars, actors,
politicians, and just about everybody in New Canaan.

But there was nobody in that tony, little New England town quite like him. Nobody.
He was a true original. Our paths would often cross on Main street, at a game, in
church, or the coffee shop. It often started with, "Hey, devils, what's shaking?",
and  quickly progressed to frequent and hearty laughs.

I always left our meetings with a huge smile on my face and feeling better than the
moments before I had seen him. That was one of Troups many gifts: making people
feel better about themselves. 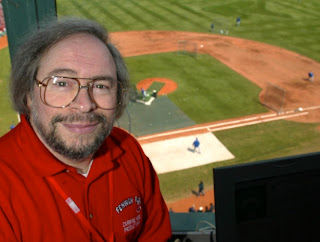 CARL BEANE  May 9
Carl Beane waited his nearly entire life to get his dream job. At the age of 50,
Beane won a competition to be just the fifth public address announcer in the
history of the Boston Red Sox. It's safe to say, there was nobody in the organization
who loved his job more than Beane.

In May, Beane had a heart attacked and died while driving just outside of
Boston. It seemed so wrong and so unfair.

Beane proudly wore his two World Championship rings and seemingly walked
on sunshine to his perch high atop Fenway Park. With great pride and respect
for his job, Beane would announce all the hitters before they strode to the plate.

Beane wasn't blessed physically, but God gave him a powerful voice that he
used to land one of the most coveted jobs in baseball. I'm sure he standing at
the gates of Heaven announcing the beautiful people like himself, when they
come walking through.
Posted by Paul Devlin at 5:08 AM