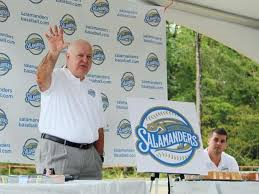 Less than a month after Durham celebrated the 30th anniversary of a movie classic, the
city is mourning the loss of a man who had a significant role in the making of "Bull Durham"
and was a big part of the fabric of baseball in North Carolina.

Pete Bock, who I affectionately called, "Mr. Baseball", passed away on July 14. In my travels
through baseball and sports broadcasting, I've never met anyone quite like Pete Bock. He was
truly a gem. Bock was as nice as the Pope with a kind, gentle heart, who didn't have an enemy
in the world. OK, so maybe he made a few when he worked as a professional umpire, but
once he put away his gear, Bock was as beloved as any person I've ever met.

I first met Bock back in the fall of 1987. I had finished up an unfulfilled baseball career at
UNC and was taking classes needed to get my degree. I'm not sure how Bock got my name
and phone number, but he called me one day to see if I wanted to be part of this baseball
movie in Durham. I was a Radio, Television, and Motion Picture major at UNC so I figured
I'd see how a movie was made up close and person. I reckoned the movie would be in
Blockbuster three weeks after it was released, but thought it'd be a great experience, nonetheless.

Pete and I hit it off right away. I was fascinated by his career in baseball that saw him
become the general manager of the Durham Bulls as well as the Hawaii Islanders, the former
AAA franchise of the Pittsburgh Pirates, a franchise Bock rooted for all the way up until his
death. There were also stops in Eugene, Oregon and Idaho Falls. He must've wondered when
the heck I'd stop with all the questions about his baseball career. I was like a sponge and
wanted to soak in all of his great stories. 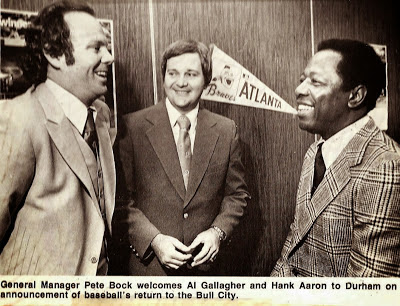 With his extensive baseball background and ties to the Durham Bulls, Bock was a natural
fit to be the baseball consultant for "Bull Durham." He was in charge of coordinating baseball
boot camp, a two-week session where the actors really learned how to play. Bock also
chose which players he felt should do which scenes and also appeared as the minister in
the movie, marrying off Millie and Jimmy.

One evening, Pete tapped me on the shoulder and said, "Get a bat and your helmet and go
see Ron at home plate." Ron was Ron Shelton, the director of the movie. He told me that
Kevin Costner was going to tell me what pitch was coming and I was going to hit a home
run. Four pitches later, that was a wrap. 30 years later, I still get to say I hit a bomb off
Nuke LaLoosh. 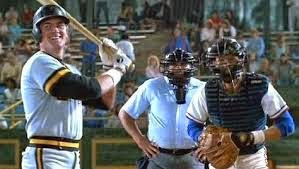 For some reason, Pete and I stayed in touch after the movie ended -for like, 28 years. I
criss-crossed the country for various jobs in television and we still managed to keep in touch.
Maybe it was because of the "Bull Durham" thing. Maybe it was because we were former
Tar Heels, I don't know. I will say this, Pete was a much bigger former Tar Heel than I could
ever dream of being. The man loved the Heels. Went to many games dressed in Carolina blue
gear from head-to-toe.  He was friends with Roy Williams and a big contributor to UNC and its
athletic programs.

In 2015, tragedy struck. After an ice storm hit North Carolina, Bock, who lived near Raleigh,
slipped and fell in his driveway. His wife, Cindy, rushed to his side only to  fall and break her hip. 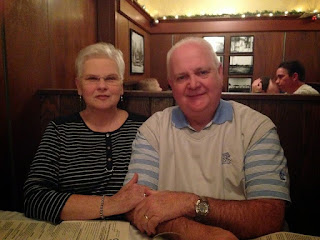 Bock hit his head in the fall and was paralyzed below the waist. In an instant, his life, which


had been an amazing up until that point, was changed forever. Hearing this was like a punch
to the gut that sucked nearly every ounce of oxygen from my entire body. It was sad, tragic, and seemingly so unfair. Anyone who has walked this earth long enough knows that life can
be cruel and terrible tragedies occur everyday, but this just wasn't right.

Bock was universally loved and respected in a profession where both don't come easy. Besides
his extensive experience running minor-league teams,  Bock founded the Coastal Plain League,
a collegiate baseball summer league that lists Kevin Youkilis and Justin Verlander among
its alums. 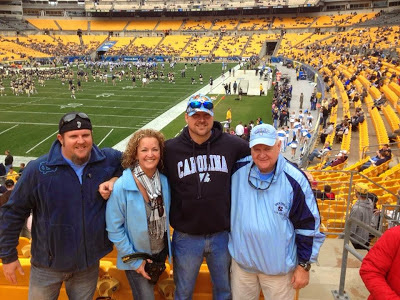 Pete Bock was a baseball man through and through. But he was so much more than that.
He was a great father, husband, and family man who was very religious. I will never forget
his kind heart, infectious smile, and great laugh. His was a life well-lived. Pete leaves
behind a wonderful family and friends too many to count.

Pete Bock will be missed, but "Mr. Baseball" is in a great place right now, in Heaven, telling
amazing stories about his life and the game he loved.

THE GREATNESS OF JASON COOPER 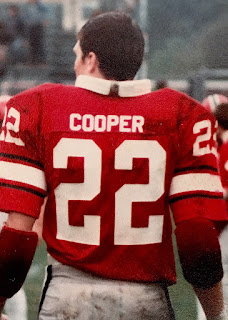 As I was running in New Canaan on a sun-splashed Thursday afternoon, a Jeep Wrangler
with its top off, was waiting for the light to turn green at the intersection of South Avenue
and White Birch Road.  I recognized the mountain of a man in the driver's seat who made
the Jeep seem like a Tonka Toy. We had been football teammates at New Canaan High
School and college rivals, attending schools just eight miles apart in North Carolina.

With his mega-watt grin and booming voice, my old friend yelled out, "Devils!", which
brought a big smile to my face. Jogging past his Jeep, I bellowed out, "Big Coooooop!
You are still da man."

Two days later, Jason Cooper, an extraordinary athlete and an even better person, was gone.
He died of an apparent heart attack at the age of 52. His death sent shockwaves through this
bucolic town along Connecticut's Gold Coast. 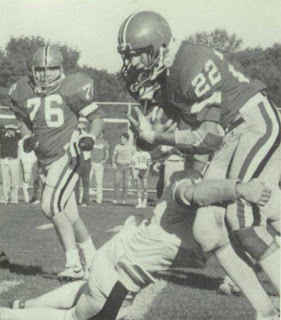 Cooper was the man during his playing days at New Canaan High School. The football gods
seemingly poured him into a uniform and announced, "This is what a football player should
look like." Cooper was blessed with great size, strength, and immense hands that swallowed up nearly every ball thrown his way. He had a motor that never quit, playing through the whistle
while destroying everyone in his path. Cooper could've played any position on the field and
been named all-state at every one of them. He was that good and that talented. Cooper was
eventually named all-state at tight end while leading Lou Marinelli to the first of his 12
Connecticut championships.

Cooper was all-state in lacrosse as well. At 6'4" and 225 pounds, Coop was a man among boys
and virtually unstoppable playing attack for Coach Howard Benedict's New Canaan Rams.

After graduating from New Canaan, Cooper ascended to even greater heights at Duke
University where he played every single game through his junior year, catching 68 passes. He
also played on the Blue Devils lacrosse team for two years which is quite an amazing feat.

A broken ankle late in his senior year on the gridiron hurt Cooper's chances of being drafted,
but signed free-agent deals with the Miami Dolphins and Dallas Cowboys. However,
he never played in an NFL game.

I can go on and on about the great athlete Cooper was - there were few better in the history
of New Canaan sports - but that would take away from shining the light on the person Cooper
was. As tremendous as Coop was on the playing fields, he was even better off them. He was so humble, so giving, and such a loyal friend and teammate. 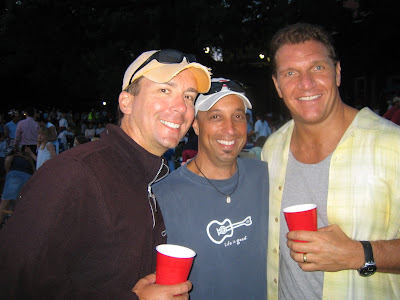 I used to get a chuckle when Coop would walk into a restaurant or bar with his close friends,
many of whom were much smaller than him (who wasn't?). They would always be in the lead
with this incredible hulk following close behind. They'd have confident looks on their faces,
ones that seemingly wanted to blurt out, "Hey, if you mess with us, then you'll have to mess
with Coop."

Incredibly gifted and extraordinarily accomplished, Cooper never bragged or started a sentence
by saying, "I did this...." or acted like he was better than others. Coop just wanted to be one
of the guys. He was a man's man whom women adored. Cooper was truly loved, admired,
and respected by everyone he came in contact with. We weren't best friends, but he always made
me and many others feel like we were. 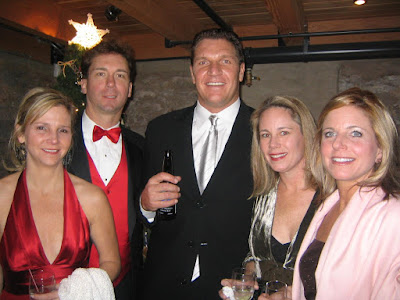 On a hot summer night in 1988, I was in Durham playing in a Carolina League game for
the Lynchburg Red Sox. While in the on-deck circle, I heard a booming voice that was quite
familiar to me. "Hey, Devils!" I turned around and it was Coop with a few of his football
teammates at Duke. He had come down to see me play and just say hello. Two innings later,
I hit a grand slam for my first professional home run. Coop was going crazy. Next time I was
in the on-deck circle, he came down to see me and said, "We have to celebrate that one!"
And boy, did we ever. We went to Chapel Hill and closed the town down. Cooper wouldn't
let me pay for a thing and offered to take care of the fine for breaking curfew - which I did
after arriving back at the hotel close to 6 a.m.

That is one memory of Coop that I'll never forget.

While working at a gym one summer, the owner, who was getting rid of some Nautilus
equipment, told me that "if you can move it, you can have it." I needed the biggest and
strongest person in New Canaan to help me. That, of course, was Jason Cooper. When I
asked him, he didn't hesitate - and didn't expect anything in return for giving his time and extraordinary muscle. 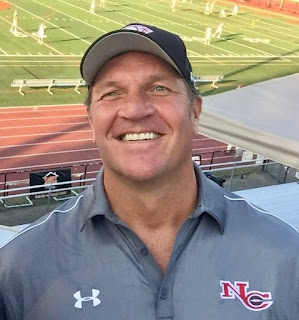 That was Jason Cooper.

Cooper was an amazing guy who touched a lot of lives. He was blessed with extraordinary
gifts and used them to accomplish many amazing things.  Jason Cooper was a beautiful
human being-a great, great man who left this world far too soon.

We will never forget you, Coop. 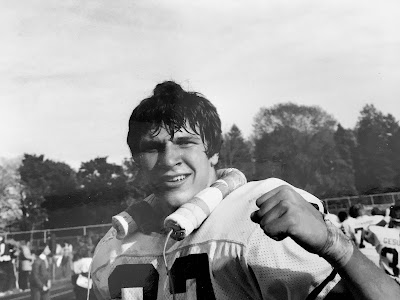