SERENA WILLIAMS AND THE RULES 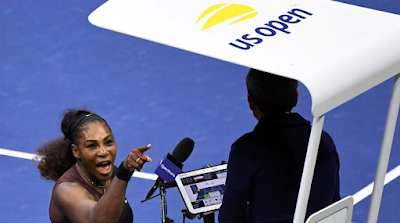 Respect seems to be part of a foreign language these days and the meaning of it has become
pretty foreign to a lot of us, too. Oh, we know how to spell it - I discovered that after
Aretha Franklin died and people plastered R-E-S-P-E-C-T all over Facebook, as if that
was the only song she ever performed. I've learned ignorance is a societal problem, as well.

So, it really wasn't all that surprising to see an episode of Jerry Springer break out at the U.S.
Open last Sunday. Big drama in the Big Apple. A reality show worthy of a slot on HBO.
Serena Williams, a new mom and the greatest tennis player of all-time, got embarrassed by
a 20-year-old kid and then embarrassed herself with her boorish behavior. And then she did
what most people seem to do these days when things don't go their way: she pointed the
finger at someone else.

Yep, it the was chair Carlos Ramos that had to be blamed for her epic meltdown. In fact,
judging by the comments that followed on social media, half the free-world saddled Ramos
for causing the spectacle which happened, sadly enough, at Arthur Ashe Stadium, who was considered so classy, dignified, respectful, and universally respected, they named a huge
building after him.

Serena was clearly getting outplayed by a Grand Slam final neophyte. She was losing. She
was desperate. She tried to distract her opponent with her tantrum and verbal abuse of the
official. If she was closer to Naomi Osaka, I almost think she would've gone all Mike Tyson
when he was getting embarrassed by Evander Holyfield and bit the kid's ear off.

Instead, she screamed and pointed at Ramos demanding an apology and called him a
thief,  both of which qualify as verbal abuse - not to mention unprofessional and uncalled for. Williams should've known going into the championship, Ramos is considered one of the
strictest officials in the business. It probably played a part in why he was selected to officiate
the championship match in what many to believe is an electric, if not hostile environment.
Serena challenged him in front of the tennis world and she lost. Ramos didn't buckle in the
face of celebrity and gave her not what she deserved but earned: three violations and a game
penalty.

And everybody went bananas.

Stop it, world. Ramos showed that he had a strong spine and enforced the rules. He simply
did his job to the best of his ability. Are we going to bash a guy for trying to uphold the integrity
of the game by making everyone play by the same rules? Isn't that what we all want in sports,
business, and life? What happened if he didn't follow the letter of the law? I'm pretty sure
the other side would have claimed he was intimidated by Serena and looked the other way. 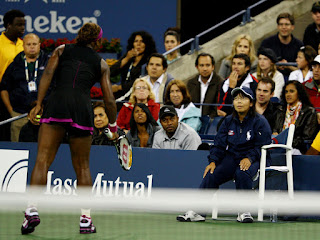 Perhaps, Ramos seemed to remember what a lot of other people conveniently forgot:
Serena's history at the U.S. Open with officials. In 2014, she all but threatened to jam a
ball down the throat of a lineswoman after disagreeing with a call that she made. That
was quite a display of sportsmanship. Serena was disqualified from the match. Anyone
starting to see a pattern here?

God dang, many people wax poetic about "the integrity of the game" and playing by the rules,
but once a strong person tries to enforce them, all the rhetoric and righteousness goes out the
window. Why blame Ramos for respecting the rules and trying to ensure fair play? Isn't
that his job? It matters to him and he should be appreciated for not melting in the face
of pressure and celebrity and doing the right thing. I welcome and applaud that.

In her press conference where she was almost as pathetic as she was at the awards ceremony,
Serena said Ramos was sexist and she was fighting for women's rights. Stop it, Serena. Check
the history book. Men have been penalized far more than women in the history of the game and
they don't get away with the things you think they do.

Sure, we remember John McEnroe smashing rackets and screaming at the umpire, "You can't
be serious!" Well, Johnny Mac didn't get away with very much. He was fined $6,000 for that
outburst. McEnroe was suspended for two months after the U.S. Open in 1987 for his childlike behavior.

There isn't enough room on this page to list all his fines and suspensions. Few umpires looked
the other way when Johnny Mac was playing and he paid the price for his act.

Just last year at the U.S. Open, Fabio Fangino was fined $96,000 and suspended from two
Grand Slam events for his despicable behavior. After seeing Serena fined just $17,000 following
her performance at the U.S. Open perhaps Fabio should be crying foul.

Instead of pointing the finger at the Ramos, Serena should be looking in the mirror and pointing
at herself.