JEMELE HILL, ESPN, AND WHO YOU ARE 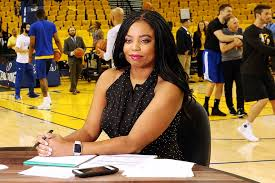 During the height of the Jeremy Lin phenomenon in 2012,  the guard of the New York
Knicks at the time, had a horrendous game, turning the ball over nine times in a loss to the
New Orleans Hornets.

An editor for ESPN's digital platform tagged the headline of the article about the Knicks
loss this way:

A Chink In The Armor.

Of course, social media caught fire with the perceived racial slur against Lin, who is Asian.
The suits at ESPN fired the person responsible for the headline, no questions asked.

Since that day five years ago, ESPN fired Rod Parker for wondering on-air if former
Washington Redskins quarterback RGIII was "a brother or a 'cornball ball.' Tony Kornheiser,
on his non-ESPN radio show, mocked the wardrobe of ESPN colleague Hannah Storm.
Kornheiser got suspended for two weeks.

On September 11, Jemele Hill, a co-anchor on the barely watched and highly-criticized
show, "SC6", went on social media to rant.  The show Hill appears on is one that has
come to define what ESPN is all about: anchors screaming, yelling, trashing others, and
trying so, so hard to make the show about themselves with hopes of getting an Applebee's commercial.

Hill, who is African-American, took to Twitter, a place where the self-important and
self-absorbed go to tell the world how funny, smart, and fabulous they are in 140
characters or less. Hill took aim at our nation's president, Donald Trump.

The 'likes' to her tweet started to roll in from her 870,000  followers. We are a world
addicted to 'likes' and Hill is no different, so feeling all good about herself, she kept on
tweeting.

Donald Trump is a bigot. Glad you could live with voting for him. I couldn't, because I
cared about more than just myself.

Interesting. Hill seemed to care more about herself and being some kind of hero to the
masses than the company she was representing.

This isn't the first time Hill has been in the eye of  a firestorm. In 2008, she wrote a column
for ESPN.com where she used an Adolph Hitler reference.

“Rooting for the Celtics is like saying Hitler was a victim. It’s like hoping Gorbachev
would get to the blinking red button before Reagan.”

ESPN suspended her back then saying, “Jemele has been relieved of her writing and
on-air responsibilities for a period of time to reflect on the impact of her words”

Fast forward to 2017, that same ESPN employee goes on a Twitter rant about the president
that included this:

He is unqualified and unfit to be president. He is not a leader. And if he were not white,
he never would have been elected.

This is sadly ironic, since there are many in the television industry who believe Hill
was never qualified to host a television show on ESPN, much less at a station in Erie, Pa.

Some say she is not a good anchor since many of the shows she's been on at ESPN were
cancelled and the program she is now a part of is close to unwatchable.

And some feel that if she were not African-American, Hill would never have gotten to be
on SC6.  But hey, it's just an opinion. Hill gave her opinion about the president, so I guess
it's all right for others in the industry to have theirs. That's what the First Amendment is all about,
right?

Except that it wasn't all right when it came to Curt Schilling. Like Hill, he had been
suspended by ESPN for an inappropriate tweet which, ironically, included a reference to Hitler.

It's said only 5-10% of Muslims are extremists. In 1940, only 7% of Germans were Nazis.
How'd that go?" The text was superimposed of a red-tinted photo of Adolf Hitler.

Schilling got suspended for a tweet and Hill got sent home for using Hitler in a column that
appeared on ESPN.com. Fair enough, but I'm kind wondering what that  kid who used the
"Chink In The Armor" reference was thinking about this after he got canned.

Schilling, like Hill, is addicted to Twitter and they apparently cant' control their impulsiveness
when it comes to issues outside of sports. In 2015, at the height of the transgender
controversy in North Carolina, Schilling tweeted his opinion:

“A man is a man no matter what they call themselves. I don’t care what they are, who they
sleep with, men’s room was designed for the penis, women’s not so much. Now you need
laws telling us differently? Pathetic.”

That's his personal opinion and there are many people who believe Schilling was speaking
the truth, just as millions are supporting Hill for what they feel is the truth about the behavior
and ideology of the president.

ESPN didn't think that way about Schilling and fired him. "ESPN is an inclusive company
Curt Schilling has been advised that his conduct was unacceptable and his employment with
ESPN has been terminated.”

In the last of Hill's comments about the president of the United States, she believed that
Donald Trump is a white supremacist who has largely surrounded himself w/ other white supremacists.

"Jemele has a right to her personal opinions, but not to publicly share them on a platform
that implies that she was in any way speaking on behalf of ESPN. She has acknowledged
that her tweets crossed that line and has apologized for doing so. We accept her apology."

Did ESPN forget about Hill's Hitler reference in an actual column published on ESPN.com
in 2008?

How come ESPN didn't accept the apology of Tony Kornheiser for his unflattering comments
about the wardrobe of Hannah Storm? If people thought Hill spoke the truth about the
president, then surely they had to think Kornheiser was spot on about Hannah's hideous choice
of professional clothing.

How come ESPN didn't accept the apology of Parker for asking if RGIII was a
'cornball brother',  whatever the hell that means?

What about Schilling's right to a personal opinion?

Why didn't ESPN accept Linda Cohn's apology for her inappropriate comments about the
political climate and how it affected ESPN?

Why didn't ESPN accept the apology that young kid who mistakenly wrote the "A Chink
In The Armor" headline on, of all places, a mobile platform?

That's because when it comes to handing out discipline in society it all depends on who you
are and represent.

We all want believe the rules are the same for everybody in business and the punishment
for  breaking them will be fair and consistent. But we all know that's not how it works in the
world, especially at ESPN.