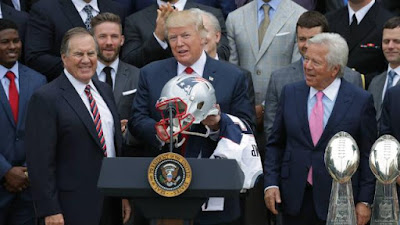 You know what happens if you play a song too many times? Yeah, it gets stale, even boring.

That's what I feel like when I see professional athletes being honored at the White House after
winning a world championship. It's become like a broken record playing over and over again
and over again.

Oh, it used to be cool. So cool that Sports Illustrated, when the magazine itself was cool,
would feature the ceremony in some form on its cover. SportsCenter made a big deal out
of it and kids everywhere once dreamed of shaking hands with the president after hoisting
the Lombardi Trophy.

Now, it's become somewhat of a nightmare. Millionaire professional athletes, many of whom
were/are coddled through their entire careers don't want to go, whether to make a political
statement or just because it's one big hassle.

"You mean I have to fly all the way across the country to meet the president for five minutes?
Screw that!"--(Said no one ever, but thought of by 99.9 percent of today's professional athletes)

Recently, basketball star Steph Curry indicated he didn't want to go to the White House
with the World Champion Golden State Warriors to be honored by President Trump. Like
many African-Americans, Curry doesn't approve of Trump's ideology and beliefs, and quite
frankly, thinks he's a racist. With the rhetoric Trump has used in the past, I can see how
that would make any person of color uncomfortable. I get it.

And Trump being his Trump-Twittering self, responded swiftly to Curry in less than
140 characters.

Going to the White House is considered a great honor for a championship team.Stephen Curry
is hesitating, therefore invitation is withdrawn!

That opened the door for the King, Lebron James, who couldn't wait to pounce on the Donald, tweeting:

U bum @StephenCurry30 already said he ain't going! So therefore ain't no invite. Going to
White House was a great honor until you showed up!

Good, lord, can we make a reality show with all these guys included?! These are grown men?
Role models? A president of the United States? Seriously?

I've long thought that while many of us graduate elementary school, there are some that just
can't get it out of their system. This fortifies that belief.

Children being children before they even meet on the most famous front lawn in America.

Curry isn't the first, nor the last that will make noise about a trip to the White House. In 2012,
Tim Thomas, who helped lead the Boston Bruins to the Stanley Cup title, refused to show up
with the rest of the team to meet President Obama. The Vezina Trophy-winning goal posted
his explanation for his no-show on Facebook instead of Twitter.

I believe the Federal government has grown out of control, threatening the Rights, Liberties,
and Property of the People," the message read. "This is being done at the Executive,
Legislative,and Judicial level. This is in direct opposition to the Constitution and the Founding Fathers vision for the Federal government. Because I believe this, today I exercised my right
as a Free Citizen, and did not visit the White House.

As I've heard so often over the last few days, everybody has the right to their opinion.

But does everything have to have a friggin' side show these days? Why does every person
have to attempt to go viral, be trending, or get a million likes by doing something controversial?

Can't anybody be the bigger person and just roll with it? Keep the mouth shut and not be
a distraction? I know, I know. I'm not supposed to tell or suggest anything for anybody to do
or not do. I reckon I have to be a little more PC because somebody, somewhere is sure to be
offended.

With all that said, I think it's time to end the nonsense with professional athletes and teams
going to the White House. Most of them don't want to be there anyway. The media wants to
turn a little mole hill into Mount Everest with really stupid questions. Instead of asking players
how they feel about winning championship, the first question now seems to be, "Are you
going to go to the White House to meet Trump?"

It is just sports.

Forget about professional athletes. As Kurt Russell, in his portrayal of Herb Brooks in "Miracle
on Ice", said about the Soviets, "Their time is done."

Professional athletes going to the White House should be done. Over. Stopped forever.

Instead of professional athletes, please honor military veterans who put their lives on the line
for the country. They deserve the recognition every single day. The athletes get enough. They
don't need it. They don't appreciate it.

Honor the first responders who demonstrate amazing courage in trying to save the lives
of others. They get virtually no recognition. Professional athletes get too much.

OK, keep honoring college athletes and teams. But it's time to eighty-six paying homage
to the professional athletes. It's gotten out of control. It's become a circus. We have enough
of those in the country going on right now.