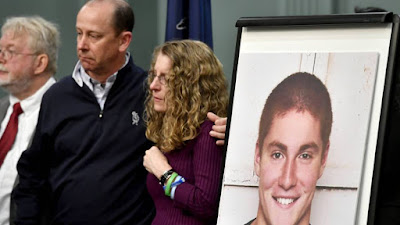 One thing I've learned over the years is the smartest people in the room often make the
dumbest mistakes. Whether it's because their massive egos have blurred reality or made them
tone deaf, I've often discovered many of these Ivy League and fabulously educated leaders
and administrators just don't have a clue. I'm sure you've had a moment sitting in a conference
room listening to those running the company and said to yourself, "How the hell did this guy
get to be CEO?"

I've been there, too.

And I'm really starting to wonder how any of the leaders and administrators at Penn State
got to be in the positions they are in. They are beyond ignorant and have absolutely no sense of reality, not to mention compassion.

In February, one of their students, Tim Piazza, died during an initiation (hazing) ritual at a
slightly off-campus fraternity house. During an interview in the aftermath of 18 students being charged in connection with the death of Piazza, the vice-president of student affairs offered up
this nugget: the school wasn't culpable for the event because it took place off school property.
OK, great, thanks for throwing that out there.

However, when the parents of Piazza appeared on the "Today" show to talk about how
their son was treated like "roadkill" by his frat brothers and how the university seemed
to ignore their loss, my disrespect for Penn State and their  phony brand, went to an entirely
different level.

Piazza's father revealed that no representative from Penn State bothered to show up at the
wake or the funeral for his son. He went on to say that nobody from the fraternity where his
son died, managed to take a few hours of their day to pay their final respects to a 'brother.'

Yeah, that's what you call a great fraternity and brotherhood.

The University administrator assigned responsibility for representing the school at student
funeral services was unable to attend the service for Tim due to a personal emergency.

Let me interject right there.

Assigned responsibility for representing the school at student funeral services?

Did I really read that right? Assigned responsibility for representing the school at funeral
services? Penn State, you make it sound like the school you run is more like Romper Room
than an institution of higher-learning. A person has to be assigned responsibility to attend
a funeral? Good, grief, whoever wrote this press release needed to be fired yesterday.

And the representative from Penn State couldn't attend the funeral of one of its own due to a
personal emergency?!!!!  You can't be serious!!

Um, Tim Piazza had a personal emergency within a Christian Hackenberg throw from your
posh offices on campus and nobody helped him out. In fact, the boys in the frat house threw
water on his face, slapped him, kicked him, and when he was close to death, one of them decided
to Snapchat because he felt 100 likes were far more important than getting his 'brother' medical
help.

But somebody else had a personal emergency, which was probably not a life or death one like
Piazza had, and couldn't go?! You couldn't send anyone else to go to the funeral? That man was
your only option?

I continue with Penn State, with their own words:

We contacted the Piazza family in advance of the service to let them know about his conflict.

Are you for real, Penn State?! Conflict? You characterize it as a conflict? Your professors teach
students to have back-up plans in case of conflicts. They advise them how to prepare for, avoid
and deal with conflict. That's elementary, dear administrator.

How do you characterize the death of a kid who had a blood-alcohol level of .40?

Was Jay Paterno not available? He somehow just got voted to the school's board of directors.
Make Paterno earn his big salary for doing nothing by sending him to the funeral.You could've
sent the team mascot for Tim's sake. It's a helluva lot better than not sending anybody at all.

Oh, I realize the funeral was a three-and-a-half hour drive from campus, but come on, you set
your football coach up to fly all over the country to talk to 17-year-old kids and their parents
about the great benefits of  going to Penn State.  Surely, you could've fueled up the private jet
to make the quick trip to New Jersey to pay your final respects to a kid who loved and supported
your school.

I'm quite sure if Piazza had been on the football team, an entourage of Penn State officials
would've been front and center at the funeral with the hope of being shown on ESPN.

The University did participate in a vigil held with the Piazza family on campus. Even so, we
deeply regret that no one was asked to attend Tim’s funeral in his place.

The university did not participate. Hundreds of kids showed up to pray for Tim after his brutal
and avoidable death on your campus, nobody from the administration did. If you're going to say Piazza's death happened off-campus, then please don't try and use the students who were on-campus
at the vigil to say the university did participate because you did not.

Regret? You're getting good at that, aren't you? I recall your regret upon learning that more
than 30 kids had their lives ruined by Jerry Sandusky, a predator who was allowed to roam
around campus freely.

Joe Paterno, the legend who helped built Penn State's image of doing things "the right way,"
said he "wished he could've done more" to stop it. He took that regret to his grave. Those
words should've permanently etched into the craniums of every administrator at Penn State, yet
when they had a chance to do the right thing this time around and attend either the wake or
funeral of Piazza, they ended up admitting exactly what Paterno did.

Heck, you even gave Sandusky the keys to the facilities long after he "left" the program. You
heard the stories about Sandusky for many years. yet, you gave him carte blanche in a place where he allegedly raped young children, their lives ruined forever.

Yep, I'm sure you hold a great deal of regret for trying to cover-up the entire scandal, as well. You
were more interested in protecting your paychecks, jobs, and the image of Joe Paterno and the university than you were in protecting innocent kids.

All the sordid details came out and rolled through Happy Valley like a tsunami, destroying nearly everything great you built, including that wonderful statue of Paterno.

According to College Magazine, Penn State has the most powerful alumni base in the country,
ahead of Harvard, Yale, and other super colleges and universities. You mean to tell me you
couldn't call someone in New Jersey to represent the great Penn State University at Piazza's
funeral? That is the least you could've done.

In your massive stable full of administrators, educators, coaches, and alumni, you couldn't get
a single person to represent the school at a funeral that never should've taken place? How sad.
How weak. How incredibly Penn State.

You paid out $93 million to the 36 victims who were sexually abused by Sandusky, I'm sure
you  could've scraped together the money needed to get someone to show up for Piazza's funeral
or wake. Next time, you need money to do the right thing, call me. I'll give you everything I
have to help you out.