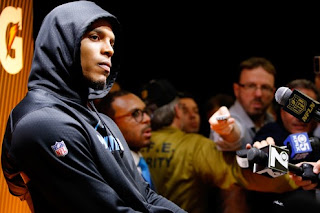 America couldn't wait to pounce on Cam Newtown, could it? Every sports jock and
talking head across the country was just waiting for the Carolina Panthers quarterback
to screw up so they could unleash their jealous, ignorant fury on the magnificently gifted
athlete.

They all got their wish when the MVP had his worst performance on the NFL's biggest
stage. He played poorly in the Super Bowl and acted even worse during and after it. Newton
didn't like some of the questions he was asked after the game and showed everyone he
didn't have time for them as he walked away from his post-game press conference quicker
than Marshawn Lynch ever said, "I'm only here so I won't get fined, boss."

Suddenly, Johnny Manziel was off-the-hook as the quarterback America loves to hate.
Newton became everything Manziel has been called over the last two years: punk,
immature, baby, spoiled, entitled, fill-in the blank. Luckily, Newton has an MVP trophy
to hang his hat on or you'd think those jaw-dropping athletic gifts he's been blessed with
are just a figment of Mel Kiper, Jr.'s imagination. 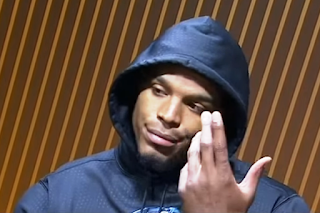 Social Media was on fire with words like "classless", "sore loser", "poor sportsmanship",
which have been tagged to the likes of Bill Belichick, who hardly even seems to enjoy
winning and acts even worse when he doesn't.

We've seen Tiger Woods pout at the end of major tournaments and bust out of press
conferences early. He slams clubs, drops f-bombs, and yells at people who blink during
his back swing. Belichick is about as short, rude, and arrogant as a human can possibly
be in his post-game press conferences. Should we bring up good 'ole Bobby Knight
from his coaching days when talking about good sportsmanship and class? 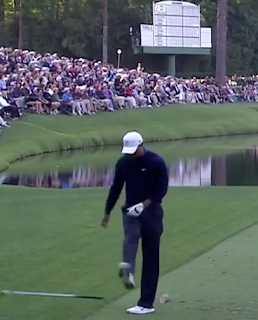 The experts say that it's time for Cam Newton to grow up. If he's going to celebrate
excessively in victory, then he must be gracious in defeat, they say. Of course, it's
always easy to tell someone else how to act and if you do it with great emotion, then
chances are, you'll probably end up "trending" on Twitter and that's exactly the goal
of nearly every talking head on the planet.

And if you want to get up on your pulpit and scream that Newton has an obligation
to be a role model, you're in fantasy land. Professional athletes have nicks, dents,
and other imperfections just like the rest of us, in many cases, even more so.

Newton is 26-years-old so it's tough to say, "well, he's just a kid and he'll grow up."
Everyone is different. Some mature earlier than others, some figure it out sooner, and
others finally "get it", when they get it.

Judge Cam Newton and his attitude, immaturity, and behavior all you want, it doesn't
mean a thing. He is the guy who gets in the ring and competes. You don't. He's the guy
playing in front of 100 million people with heat-seeking missiles disguised as linebackers
who are trying to rip his head off. You surely aren't. 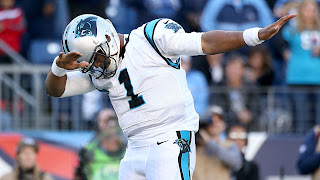 He's the guy with an MVP, Heisman Trophy, national championship, and countless
millions of dollars in the bank. Cam Newton is far from perfect, but he's living life
the way he wants to live it, not the way others want him to live it.  He's his own man
and there's nothing wrong with that. He knows he can't please everyone, so he's not
even going to try. It'd be a colossal waste of time and energy.

Cam Newton made some mistakes on a big, big stage. So, what? The sun will rise
tomorrow and he will recover. Life goes on. Go ahead and continue to waste your time
hating on the man, he doesn't care. You'll continue to watch his games and think he's
immature, a bad sport, or classless, but does it really matter what you think about him
when it's all said and done?