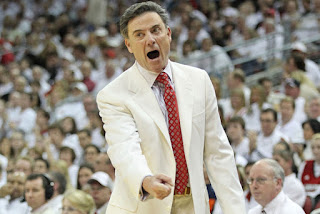 Louisville is at the center of it, which isn't quite so shocking because like most high-profile
sports "schools", they value winning above anything else. I mean, this is the school that
hired Bobby Petrino to lead young men and the football program despite his sordid past.

You remember Petrino, right? He was fired from his $3 million gig at Arkansas for
having an affair with a 23-year-old woman, whom he personally hired, illegally
bypassing protocol at the university. He took the woman out on his motorcycle one day,
got in a serious accident, and then lied to everyone about it, including his employers,
then got fired. 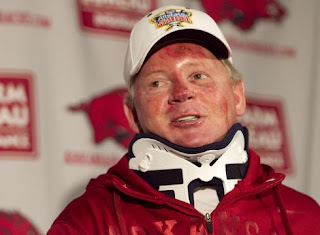 Louisville needed a great football coach a helluva lot more than they needed integrity, so
they hired Petrino after a one-year stint at Western Kentucky. Petrino somehow passed
a thorough background check and landed the job, not to mention, a multi-million dollar
contract. Not sure if there is a 'morality' clause in his contract.

There was a 'morality' clause in the contract of Rick Pitino when he had a sexual
"encounter" with a woman not his wife on the floor of a restaurant in 2009. The woman
turned out to a bit of a psycho as she tried to extort Pitino and bring down the basketball
program at Louisville. She went to prison while Pitino kept his job leading the Cardinals. 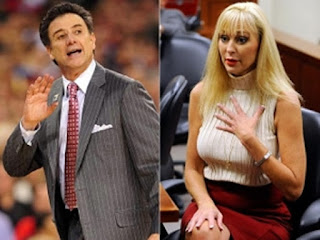 Of course, he did.

Pitino is one of the best coaches in the country who can fill the arena, get boosters
to open up their wallets to feed the program, and have the team on ESPN repeatedly,
giving the school all the exposure it craves.

Today, Louisville is getting the type of exposure it doesn't desire.

A bombshell exploded several weeks ago with a book written by an escort who
claims she provided "services" for Lousville recruits in exchange for some cold, hard
cash. There were parties, strippers, and everything else that goes with smut and sluts.

Of course, Pitino has denied knowing anything about it, which for anyone in the media,
is quite comical. Pitino is the biggest control freak in college sports. He knows
what kind of gum his players chew and the color of the shoelaces in their sneakers. 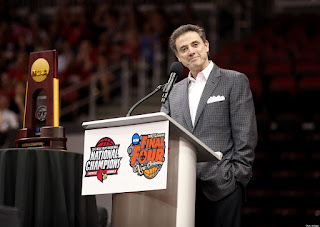 Pitino is claiming ignorance, kind of how school officials looked the other way when
Pitino brought shame to the university with his sexual encounter on a restaurant floor
which the basketball coach admitted lasted all of "15 seconds", or about a minute and
45 seconds less than the Kentucky Derby.

The athletic director and president put their heads in the sand when that happened
because Pitino was bringing millions and millions of dollars to the school's piggy bank.
People make mistakes they said, and after all, Pitino's personal life is his personal life.

I'm sure school officials will look past all the accusations of "transgressions" being
lobbed at the basketball program led by Pitino because winning and money rules in
college sports. They will find a way to deflect the blame off  Pitino because he is
their golden goose. 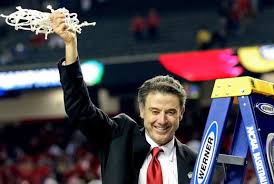 However, they can't be surprised at the smut that has risen from their stable of coaches
with shady behavior. If a leader of young men had a few drinks, performed a sexual
act with a woman not his wife (violation: adultery), and told a few lies about it, then
should anyone be shocked at what it going on with the Louisville program now?

I'm not. I saw this coming from a million miles away. Louisville should've of but
they got blinded by winning and big money.
Posted by Paul Devlin at 7:39 AM