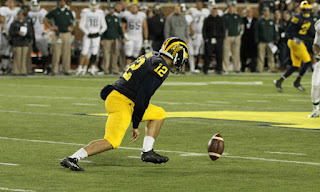 By now, football America has seen the stunning, "I can't believe what I just saw" ending to
the Michigan State-Michigan game.

On the final play, a botched punt led to one of the most improbable victories in the history
of college football as the Spartans shocked the Wolverines, snatching victory from the jaws
of defeat.

Blake O'Neill has been "Bill Buckner-ed", forever the goat for botching a play that seemed
oh, so simple to execute. He has been vilified and destroyed on Twitter, which in this day
of social media is almost worse than death. No matter what happens from here on out in
O'Neill's career, he will be remembered in the Ann Arbor for losing of the biggest games in
Michigan history, or so says the 'rush-to-judgement, the apocalypse is coming, blow
everything out of proportion' media we listen to.

Forget the facts they say, let's just crucify the guy and worry about everything else later. In
the hysteria of trying to make O'Neill the worst person on earth, people seem to overlook
something very important and that's how the Michigan coaching staff botched the final
play. They should be held just as much accountable as everybody else has in pinning the
loss entirely on the shoulder pads of O'Neill. 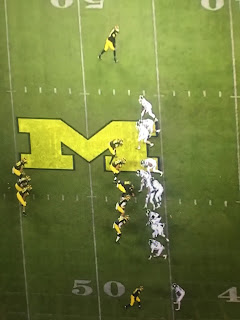 10 Michigan State defenders on the line of scrimmage facing five Michigan blockers. A
Michigan gunner on the left flank doing nothing. The Spartans didn't have anyone back
to catch the ball, but it's not like Michigan could gain possession on the recovery of the
punt downfield by spreading the gunner out all alone to the left.

The Wolverines needed to get the punt off successfully to win the game. That's is, that's
all. Even if it traveled for two yards, the game, for all intents and purposes was over. Oh,
sure, Michigan State could've thrown a Hail Mary down to the 10-yard line and something
could've happened. We've seen it before, right.

However, we never saw what we did on Saturday, thanks to not only O'Neill, but the
Michigan coaches. 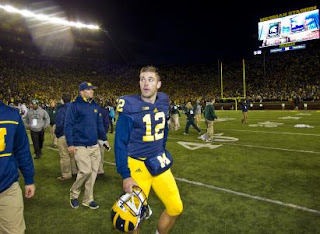 Michigan should've been in "max" protection for the punt. If you line up five guys on the
line to Michigan State's 10, bad things can happen. And they did.

Why didn't Harbaugh have the player flanked to the left, replaced and put on the line
for better protection? At the very least, that player could've helped out in the aftermath
and perhaps, even made a game-saving tackle. The "gunner" who was 15 yards downfield
was doing absolutely NOTHING. He was worthless.

I realize Michigan had three upbacks to protect the punter. But seriously, the avalanche
had already blown by the first wave of defenders because after all, it's pretty hard to
stop a 10 on 5 situation.

The Spartans defenders blew past the front line and once O'Neil dropped the ball,
he was all but a dead man. Those defenders were on him in a blur. But if Michigan
had more men on the line of scrimmage, perhaps O'Neil could've kept his wits
about him instead of losing his mind thinking about the oncoming convoy that was
trying to put him six feet under. 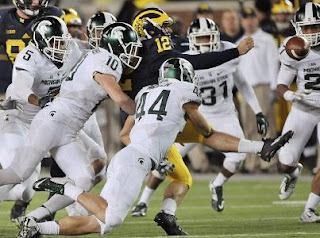 Perhaps, if Michigan had more men on the line, at least one of them could've
had a chance to prevent the runner from going the distance for the win.

Go back to the vidoetape or look at the above picture again. The formation is
more like a sieve. It couldn't stop the oncoming tsunami. No way, no chance.

Michigan could've built a dam to prevent the tsunami, but they chose not to go
that route and it cost them.

So, if you're going to blame someone, don't point the fingers at O'Neil. The coaching
staff should be taking their share of the blame, too. It's a team game and they screwed
up, as well.
Posted by Paul Devlin at 9:50 AM