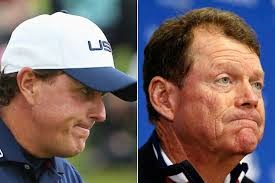 It's sadly ironic that on the day when major league baseball said good-bye to Derek
Jeter, one of the classiest and most respected players in the history of the game, the world
of golf had to see an icon along the lines of Jeter, disrespected in a terrible way.

Tom Watson, who like Jeter, put together a career defined as much by the way he
carried and conducted himself as his accomplishments, was torched by Phil Mickelson
after another United State disaster in the Ryder Cup. Watson, who captained the team
for the second time, is golf royalty. He is on the Mount Rushmore of the sport along with
Jack Nicklaus and Arnold Palmer. He's  respected the history and tradition of the game and
his character is beyond reproach.

Almost as soon as the Europeans captured the cup for the sixth time in last seven meetings,
Mickelson threw a dart at Watson, all but blaming him for the team's pathetic performance
in the Ryder Cup. In an icy and uncomfortable press conference with the entire team and Watson
on the dais, Mickelson referred to 2008 when the team won the cup with Paul Azinger as
captain. Mickelson praised Azinger for his "pod system" and " having a game plan", taking
an obvious dig at Watson and putting the weight of the loss squarely on him. 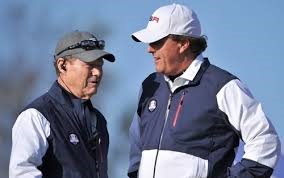 I thought to myself, Derek Jeter never would've put the blame on his manager. Not classy,
not his style. It was almost kind of sad that Watson had to sit there and listen to Mickelson
cut him down publicly. It seemed so awkward and wrong, so very wrong.

First of all, no matter what the set-up or pairings, it's the players that play, hit every shot,
and determine the outcome---not the captain. If baseball players cried and whined every
time they didn't like a line-up, I'd be up until 2020 writing about it. As self-absorbed as
baseball players are, I've never heard anyone blame their lack of success or a loss on
the lineup. Very few of them have blamed an 0-for-5 night on the manager.

Baseball, like the Ryder Cup requires team play within a series of individual games.
When you got into the batters box, it's just you and the pitcher. When a golfer takes his
stance, it's just him and the ball. No manager, no captain, nobody to blame but you. 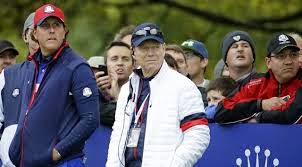 With every loss in the Ryder Cup, that seems to change. The players want to blame the
captain for the line-up and not pairing them with other players they are 'comfortable' with.
It happened at Medinah in 2012 when the Europeans staged a miracle comeback to shock
the Americans. Nobody said anything about the "game plan" of captain Davis Love III
after the team took a 10-6 lead into the final day. But after they choked it away on the final
day with the individual match-ups, there were plenty of players chirping and throwing
Love III under the bus. They just didn't do it in an open forum like Mickelson did to
Watson.

Just one time, I'd love to hear one of these silver spoon-fed, country club raised golfers
say, "Yep, our hats off to the Europeans. They were better than us. They kicked our
ass. No excuses." 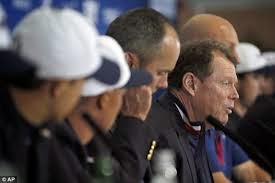 Instead, the excuses come flying out faster than the clubhead speed of Mickelson. The line-ups
stunk, we didn't have the "pod system" and the game plan wasn't as good as the last
time we won and Watson didn't let us have any input during the entire event, Mickelson
would say. That's right, can you ever imagine Tom Brady saying, "Yeah, coach Belichick
didn't let us have any say in the game plan and it wasn't as good as when we won our
last Super Bowl." Never.

There are times when it's best to keep your mouth shut. This was one of them for Mickelson.
Clearly, he was bitter because Watson put him on the bench for all of Saturday' activity.
Nothing hurts a player's pride more than being told to sit down during one of the biggest
events in the sport of golf. Mickelson's ego was crushed and he didn't like it.

Instead of showing the class of Derek Jeter, Mickelson morphed into Richard Sherman,
taking an unnecessary shot at somebody else. Yeah, I guess it made him feel better for
a moment it, but it really made Mickelson look really bad. Real bad.

Tom Watson deserved better. Mickelson should've acted and played better and kept
his mouth shut and just played the game.
Posted by Paul Devlin at 6:48 AM