GREG HARDY: THE NFL'S NEXT NIGHTMARE 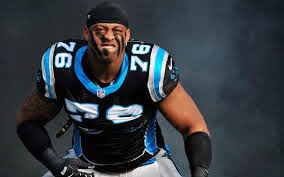 With much of the nation still in an uproar over the Ray Rice scandal, there is another
case simmering in Charlotte that's on the verge of exploding and becoming a nightmare
for the NFL.

Greg Hardy of the Carolina Panthers was convicted of domestic violence in July for
abusing, or I should say torturing his then-girlfriend. Part of her testimony
indicates just how downright scary Hardy is:

"Hardy choked me with both hands around my throat while I was lying on the floor.
Hardy picked me up over his head and threw me onto a couch covered in assault
rifles and/or shotguns. I landed on those weapons. Hardy bragged that all of those
assault rifles were loaded. Landing on those weapons bruised my neck and back." 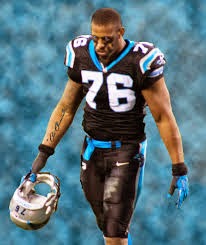 I realize there wasn't a powerful videotape that turned Ray Rice into public enemy
number one, but this testimony is not only frightening, but impossible for the NFL
to ignore. How could they, especially now, after the Rice scandal, bury their heads
in the sand and not do anything immediately.

Worse yet, Hardy is STILL playing for the Panthers. The team didn't cut him on the
spot like the Ravens did after the videotape emerged. The NFL didn't ban him
indefinitely. I understand all about due process, etc, etc, etc. and Hardy is appealing
the judges verdict. But the fact that Hardy is still on a football field and being allowed
to play is INSANE.

If you, me, or Joey Baggadonuts were not only convicted of domestic violence, but
arrested for it, we would be fired from our jobs, no questions asked. Hardy didn't get
cut by the Panthers because he had 15 sacks in 2013 and made the Pro Bowl. 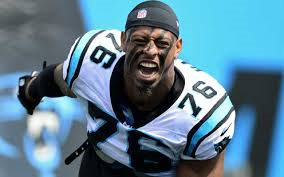 I'm not as smart as Bill Gates, but I did stay at a Holiday Inn Express last night. This
is ABSURD that Hardy is not only still drawing a paycheck, but anywhere near
a football field. Again, I understand the entire due process thing, but that shouldn't
stop the Panthers or the NFL from telling Hardy to take a seat until the entire thing
is over and decided. Hardy was found guilty by a judge already for crying out loud
Isn't that enough?

How is the NFL and it's broadcasting partners going to handle the Greg Hardy
domestic violence case in Week 3 when the Panthers host the Pittsburgh Steelers
on national television.

"There's Greg Hardy with the sack, and oh, by the way, Hardy was convicted
of domestic violence for throwing his girlfriend on a couch with loaded guns.
Man, but he is a great player," said the play-by-play announcer. Um, some how
that's just not going to cut it. 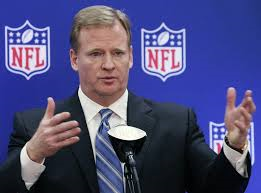 Mr. Commissioner, where are you? Did you not read the SWORN testimony
just like you didn't see that videotape of Ray Rice knocking out his girlfriend?
Good, grief.
Posted by Paul Devlin at 6:47 AM