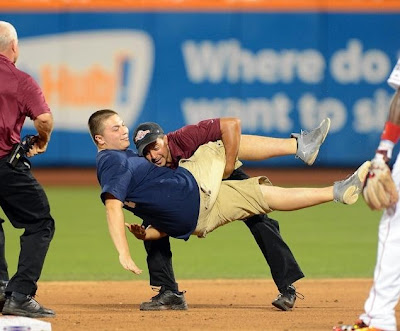 Dylan McCue-Masone couldn't just enjoy MLB's All-Star game, he had to be a part of it.
So, in this "look at me, I can go viral if I do something stupid world", the 18-year old kid from
Long Island did just that. He tweeted from the game that if he got 1,000 retweets he'd run
on the field and interrupt the game.

The only people dumber than McCue-Masone were those in the social media obsessed world
who helped McCue-Masone reach his goal in about 20 seconds. McCue-Masone got his 1,000
tweets and subsequently, his 15 minutes of fame. Bypassing that stellar security of New York
City's finest at Citi Field, the kid sprinted on the field only to be taken down in a pile drive by
a security worker near second base. 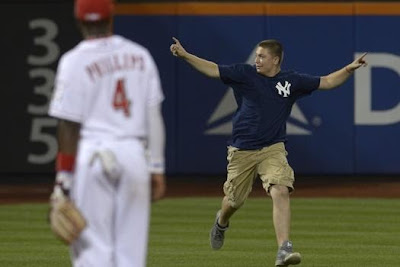 Almost instantly, Twitter lit up like a Christmas tree and McCue-Masone and his stupid stunt
went viral. It used to be that one had to accomplish something great to get that kind of
attention. Not anymore. Not in this, "I can make an instant name for myself if I do something
dumb world." It didn't matter than McCue-Masone got arrested, because to him, all the attention
was worth it. He finally became a "somebody", whether it be good or bad. 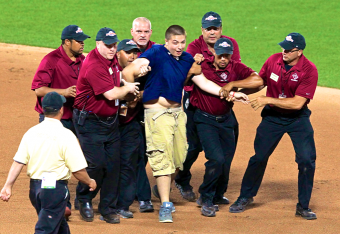 Sadly, that has become the thinking of many people in the world today and many of them are
using Twitter as their way of getting there. I truly don't understand Twitter. I don't understand
people who beg to get "followers".  Tracye Hutchins, the morning anchor at CBS in Atlanta,
who documents every 10 seconds of her life by taking self-portraits and posting them on 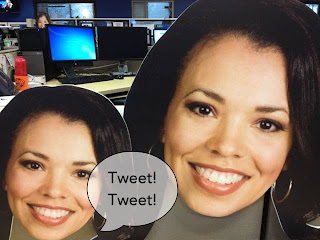 Facebook, recently sent out a picture to her "fans" begging them to follow her on Twitter.
Really? I'd be more than just a little embarrassed to do that. I don't know, I guess more people
are swallowing their pride these days if it means getting more "followers."

It used to be that you didn't want anybody to know what you're thinking, now it seems,
people want to let the world know exactly what they're thinking, feeling, and doing. And
that hasn't been a good thing for professional athletes  who always seem to be shooting
themselves in the foot with their tweets.

After the George Zimmerman verdict was reached, Josh Scobee, a kicker for the Jacksonville
Jaguars, warned his professional brethren not to go on Twitter to express their thoughts. Scobee
gets it. Unfortunately, Roddy White and Victor Cruz didn't. White, a receiver for the Atlanta
Falcons, tweet that the jury in the case "should kill themselves." Nice. Cruz, who is a level-headed 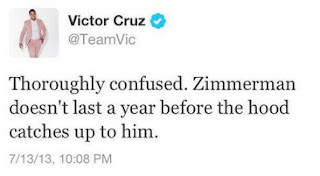 thoughtful man who plays for the Giants, tweeted that "the hood would get Zimmerman within
a year." Ooops. Cruz quickly deleted his tweet, but the damage had been done and he ended
up backpedaling quicker than an NFL cornerback trying to cover him.

The list of athletes who have damaged their reputations with stupid tweets they'd like to take
back, but couldn't,  is a mile long. They try to be witty, funny,and intelligent, but end being
really, really stupid.

Seriously, what is Twitter for? Every journalist wants to be "first on Twitter" these days as
if they'll get a Pulitzer prize award if they are. Reporters tweet action from the game so often,
they often miss the best parts of it. And for what? To satisfy their 1,217 followers?

It seems the only thing Twitter does these days is get you in trouble or make you look stupid.
But I guess in today's world, that's not so bad, as long as you can go viral.
Posted by Paul Devlin at 5:03 AM