REX RYAN: THE MAN WITHOUT THE DRAGON TATTOO 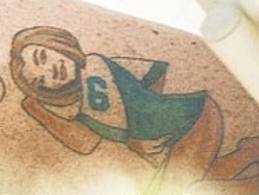 Say this about Rex Ryan, he's close to bullet proof. The head coach of the New

York Jets seems to be a magnet for controversy, but somehow, someway, he
manages to let it all bounce off him to remain standing.

Last year, there was the uncovering of foot fetish videos involving his wife, other
men, and even himself. Ryan laughed that one off and it quickly died. This year,
his fourth season with the Jets was a colossal disaster. Sanchez, Tebow, Sparano,
and a whole bunch of losses kept the team from making the post-season. The
general manager and offensive coordinator lost their jobs and there is Rex Ryan,
smiling and still gainfully employed. 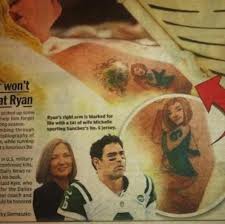 Now, The Big Rexy is embroiled in the tattoo scandal of the century. The New York
Daily News, a heavy-hitting tabloid in the Big Apple, ran a photo of Rex on the beach
in the Bahamas with a tat on his right upper-arm that looks to be that of his wife in a
number 6 jersey, while Tebowing. You just can't make this stuff up! A season soured
by the soap opera staring Sanchez and Tebow and Rex has a tattoo including both of
them with his wife role playing? Only in New York. 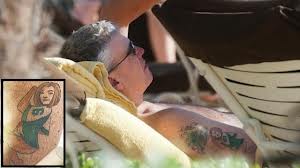 Sports talks shows in New York were lighting up with talk about the most famous
creative tattoo Gotham has seen in quite some time. Experts were brought to try
to determine if the tattoo was real. Many speculated that Rex got a fake tattoo just
to mess with the media. Really? Is he that childish? I don't know how anybody could
even think of creating that tattoo. It was brilliant.

Of course, there were reports, "according to sources," that Rex has had that tattoo
for quite some time. How come nobody noticed it a few years ago when Rex took
off his shirt at a hockey game and exposed the largest boiler in the history of sports,
easily surpassing that of Patriots nose tackle Vince Wilfork and former Detroit Tigers
legend, Mickey Lolich. "According to sources," Rex got that tattoo a few years ago.
Yeah, right. 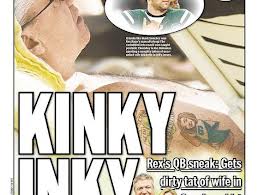 Only in New York would this be front page news and obsessed about by every
media outlet in the metropolitan area. Man, the New York Giants must be loving
it. They miss the playoffs, and they get a free pass thanks to the Jets and the Big
Rexy. Hell, maybe Jets owner Woody Johnson was jealous of the Giants because
the Mara's have "The Girl with the Dragon tattoo", (The actress, Rooney Mara, is
the daughter of the Giants owner) and he ordered Rex to get one. One never knows
with that organization. 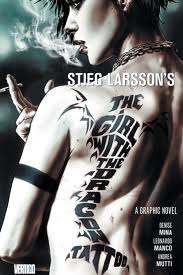 Rex Ryan is clearly the ringmaster of the NFL's biggest circus and he's got the ink
to prove it.
Posted by Paul Devlin at 12:39 PM