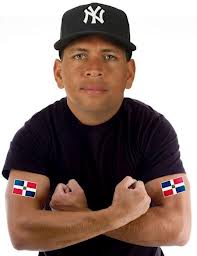 The Miami Times reports that Alex Rodriquez is among several players who purchased
PED's from an anti-aging clinic in Miami. The New York Yankees all-star has been linked
with and admitted to steroid use in the past. He might miss the entire 2013 after hip surgery
and now comes this revelation. The Yankees are still on the hook for $114 millon with
A-Rod. Ouch! What a bargain

Here are the Top 10 excuses A-Rod wil give us about being linked with the
anti-aging  clinic in Miami.

10. "I was just picking up a prescription of Viagara for Yogi Berra. What's the big deal?"

9.  "That god-dang Derek Jeter gave me the wrong directions. It's all his fault."

8.  "It's not like I lied like Lance Armstrong or anything. And I used the same dictionary
he did and this doesn't fall in the category of cheating." 7. "Madonna just wanted me to pick up some anti-wrinkle cream for her and they
gave me a little something, something extra for the road."

6. "That's not my signature or credit card number. It must be the work of Roniah Tuiasosopo"

5. "I was in the area so I just decided to pick up a variety pack of PED's for
Melky Cabrera and Bartolo Colon. Blame them, not me. I'm A-Rod"

4. "I don't understand English. What was the question again?" 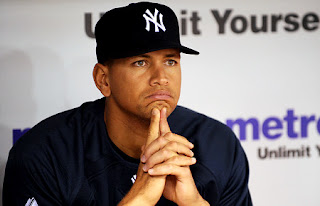 2.  "OK. Jose Canseco was right about me and everybody else. Even a broken
clock is right two times a day. So, shoot me.

1.  "Manti Te'o made this whole thing up and that clinic doesn't really exist."
Posted by Paul Devlin at 10:15 AM