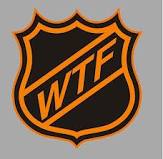 Like most of America,  members of the media have become obsessed with being
first. They have a burning desire to break a story first even if what they are supposedly
breaking, has already been broken.

Three weeks ago, Rick Reilly of ESPN was so anxious to tell the sports world that
Ben Rothlisberger hurt is shoulder, even though millions had seen the Steelers
quarterback land hard on it and leave the game, that he had a soil-your-shorts
moment. Reilly was caught on camera begging host Stuart Scott to say that he had
the story, "first on Twitter". Ooops! Hello, YouTube, good-bye, credibility.

There are some in the northeast who are questioning the credibility today of Steve
Burton, a sports anchor at WBZ in Boston. On Monday, Burton reported  the
NHL had made significant progress in the 79-day lockout and it "could possibly
end on Tuesday or Wednesday." 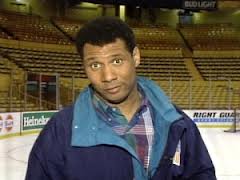 Burton isn't seen as a "hockey guy" and seemingly doesn't have any strong ties to
the NHL. Those who do, were quick to shoot down Burton's report and say their
"sources" said it was not true. Sarah Kwak, who covers the game for SI.com even
tweeted:

"Asked if there was ANY MORSEL of truth to WBZ report that deal is
imminent, Bill Daly (NHL deputy commissioner) 'Not even a single morsel...'
Great. And now I'm hungry."

Right, and please name any leader involved in on-going negotiations who has
acknowledged or been truthful about ANY MORSEL of a media report that
something has been finalized before they've had a chance to finalize it.

One blogger on SB Nation put together a top five list that mocked Burton's
report and credibility. Reason number two on why we should believe Burton:

"Burton serves (or at least served as some point) as a board member of the
Fellowship of Christian Athletes. Because no Christian has ever lied, we can
trust Steve Burton."  Not my words, but the one from SB Nation. 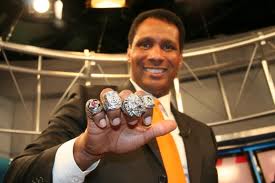 The thinly-veiled shots at Burton by those who cover the league on a daily
basis are obvious signs of jealousy and being offended at getting "scooped" by a
person who is on the fringe, at best, when it comes to covering the sport. There
were local reporters in Boston, those who think they are God's gift to covering
the Bruins and the NHL, who were clearly sour that Burton could've have
possibly gotten the scoop of the season. Those same people who have snickered
behind his back on this story,  will be smiling to his face the next time they see
him in the field, you can be sure of that.

As soon as Burton blurted out the words "Tuesday or Wednesday" when it
came to the lockout possibly ending, the "Burton Watch" was on. Tuesday came
and went with no news. A big sigh of relief for those who so desperately wanted
Burton to be wrong.

After the weekly calendar turned over from Wednesday to Thursday with no deal,
I'm sure there were private and inner celebrations by those who thought they had
gotten scooped by Burton. I'm sure many are going to Costco to pick up a few
dozen eggs so Burton can throw them on his own face. 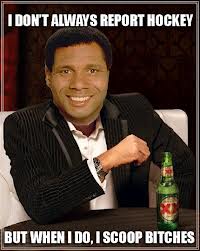 What does all this mean for Burton? If every anchor got fired for being wrong,
there would be none left. And while he wasn't spot on, he might not be that far off
as the NHL lockout seems to be thawing and about to return to action soon. If I
had a dollar for every time a reporter or "insider" created a story and was  wrong
about it, I wouldn't have had to play PowerBall last week.

Many of these "insiders" throw stuff on the wall and hope it sticks. Please, tell
me how many times Buster Olney has been correct on all his rumors. When was the
last time Peter King broke a story. Heck, Rick Reilly is starting to make a name
for himself by being wrong-- a lot. But he seems to have a knack for turning a
negative into a positive and gaining more attention for himself, which in the
television business,  seems to be the name of the game these days.

After tweeting that there was no way Notre Dame could beat USC and if they
did, he'd polish every golden helmet of the team if that happened, Reilly made
another story about him and garnered more attention. Sure enough, he wrote
a column about polishing helmets at Notre Dame, complete with silly pictures
of himself in South Bend. I swiped the pictures, but I'm sure Reilly won't have
any problem with me using them. After all, it's more free publicity for him. 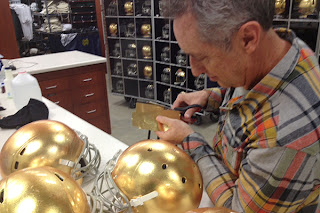 Burton has garnered more than a little attention for his bold prediction. Do
a Google search on "Steve Burton" and a plethora of articles will come up about
him. When it comes to entertainment in this day and age, it seems to be all
about trending on Twitter, Google searches, and getting it first. Damn if you're
wrong, just be sure to get it first and be sure to get a lot of attention for doing it.

What's that old saying, "Bad publicity is better than no publicity."