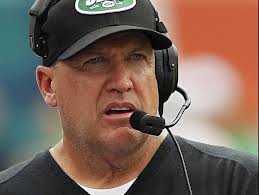 Nothing reveals character, or the lack of it, like adversity. Anybody can be cool
when things are going well, but failure has a way of shining the light on the ugly side
of  people.

After three straight losses, the New York Jets are coming undone quicker than that
plastic band did on Rex Ryan's first go-round with lap-band surgery. There is sniping,
backstabbing, and a lot of big fingers being pointed at a guy who hardly even plays. 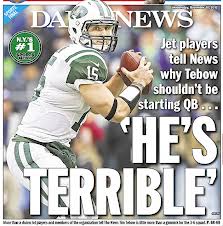 The New York Daily News reported on Tuesday that several players ripped Tim Tebow,
going so far as to say that he's "terrible". Of course, there were no names attached to the
quotes, they came under the cowardly blanket known as "anonymous". Yep, "anonymous"
players said that Tebow was a terrible quarterback. Credit Rex Ryan for standing up
and ripping the so-called "anonymous" players for being gutless.

There is nothing more gutless or cowardly than ripping a teammate and not attaching
your name to it. And so much for being a team and not throwing anybody under the bus,
especially a guy who has had little to do with the demise of the team. Right, the secondary
blew a coverage all because of Tim Tebow. Mark Sanchez has a passer rating like the
number of home runs Jason Bay's hit during his three-year career with the Mets. (26)
thanks to Tebow. And Stephen Hill has dropped a dozen passes all because of Tim Tebow.
Good, grief. This is the art of distraction and deflection. You stink so bad, you point
at Tebow and say it's all his fault, hoping that nobody notices how bad you, yourself
are playing. 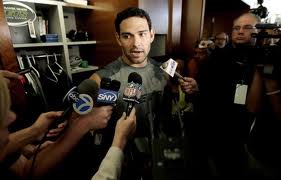 If I had a dollar for every time I heard a pro athlete say that "we have each others backs" in
this locker room or clubhouse, I'd be a millionaire 10 times overs. Yeah, and who on the
Jets has the back of Tim Tebow? Perhaps, someone is setting God's quarterback up with
a smile on his face as another "teammate" is stabbing him in the back. Man, I'm sure Mark
Sanchez is walking on egg shells waiting for the next edition of the New York Post to come
out where an "anonymous" teammate calls him the worst quarterback in franchise history,
yes, even worse than Browning Nagle, if that's possible.

We all think of NFL players as super strong athletic freaks whom you wouldn't want to
meet in an alley anytime. They are supposed to really tough, have a backbone, and a
large set of stones, right? Yet, the Jets have players who hide behind the "anonymous"
source cloak and take cowardly shots so they don't have deal with the aftermath. Damn,
Terrell Owens bashed his teammates all the time, but at least he was man enough to put his
name to it. I'm sure Tebow, who handled the whole saga with his typical class, must be saying,
"With friends like that, who needs enemies." 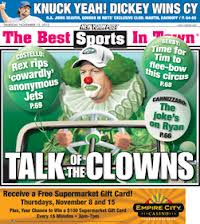 Unfortunately, this kind of gutless backstabbing doesn't just happen with the Jets and these
steroid-inflated, muscle bound players aren't the only ones who throw their teammates under
the bus. It happens every day in business offices around the country. People who are
supposed to be on the same "team" with their co-workers, are never shy of going behind
their backs to send a derogatory e-mail to the boss about them.

They smile to the face of their co-workers, then fire off a note that can dramatically alter the
career and livelihood of their "teammate". Even more cowardly, are the bosses who read
these e-mails and don't even bother to investigate or ask if that person who sent the vicious
e-mail has some kind of agenda, like getting a promotion, making more money, or is just 100%
jealous. 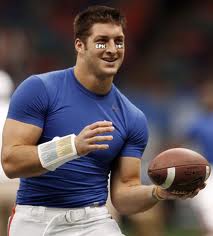 What's happening with the Jets is what really has become the American way, isn't it? Tear the
guy down who is standing near the top. Try to take him down by stabbing him in the back and
then run for the cover. Get so jealous of him that you have to fire bullets with "anonymous" on
them. The Jets are a sad bunch, they really are. But then again, so are many of the people we
share office space with