MELKY CABRERA: HE CHEATS, HE WINS. 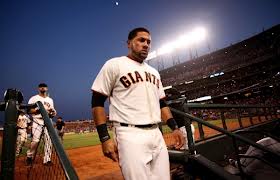 Who was it that said cheaters never win? It certainly couldn't have been anybody
in Major League Baseball. They not only welcome cheaters back into the game,
but reward them as well.

On Friday afternoon, it was reported that the Toronto Blue Jays, who have some
how become the cash cow of the the Great White North, signed Melky Cabrera to
a 2-year contract worth $16 million. This, despite the fact that Cabrera failed a
drug test, and pretty much sold out his teammates with the San Francisco Giants
last summer. They showed just how insignificant he was to them by winning the
World Series.

Cabrera got flagged for using testosterone and was suspended by Major League
Baseball under its incredibly weak drug policy for 50-games. Cabrera just happened
to be a free agent after hitting a steroid inflated .346 while winning the MVP of
the All-Star Game. 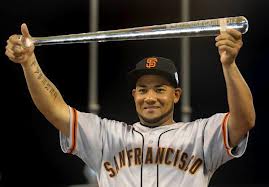 Cabrera is the same guy who tried to trick MLB investigators by purchasing a web site
and then claiming  he bought "tainted" supplements off it. I must say, that was a very
creative way to try to get out of a drug rap, but like most cheaters, Cabrera got caught--
again.

Instead of being considered a pariah in the game, much like Roger Clemens, Rafael
Palmiero, Sammy Sosa, and many others were after their drug failures and suspicions,
Cabrera not only gets welcomed back to the game, but gets rewarded nicely in the
process. Hey, MLB, what the hell is going on here? 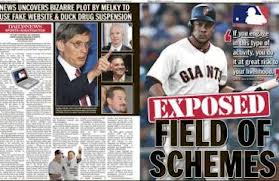 The signing of Cabrera comes on the heels of the one by the Oakland A's who re-signed
Bartolo Colon after he, like Cabrera, tested positive for testosterone and was suspended
50-games. Never mind that Colon is 39-years old and might just have trouble getting
his fastball into the upper 80's without the use of PED's. I'm sure the A's are hoping that
Colon can find a new steroid that is undetectable to  MLB's testing program.

The message MLB is sending out is a terrible one. Oh, you can test positive once and
it's 50 games, do it twice and it's 100, but the third time, you are out! As I said before,
Lance Armstrong made a mistake choosing cycling as his sport. If he excelled in baseball,
he could've tested positive a few times and still been allowed to continue his livelihood
while making millions of dollars.

This is ridiculous. Players in the minor-leagues should keep on pumping cheat into their
body because they know the money to be made certainly outweighs the embarrassment
of being caught. Cabrera gets $16 million dollars after getting caught cheating the game.
Hallelujah. He and Colon should be making commercials next year. "Major League Baseball,
We love this game." 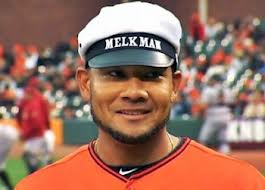 There are players in high school who will consider using PED's once again. If they see
guys like Cabrera getting caught, then be able to continue to play and make boatloads
of money, there will be nothing to deter them from using steroids and ruining their minds
and bodies.

If you're Clemens, what are you thinking? He never tested positive for steroids and was
only accused of using them by some low-life trainer who was only interested in keeping
himself out of prison. Clemens is an outcast in Major League Baseball and he sees
Cabrera and Colon getting rewarded after flunking tests? Does any of this seem right
to you?

The Blue Jays are going to take a chance on Cabrera even though he' probably not
going to use and PED's again, which just happened to make him such a great hitter
last year. Is that not in the back of their minds? Good, grief.

Commissioner Selig, if you cared anything about the integrity of the game, you
wouldn't let any known and confirmed drug cheats be rewarded in the game. I know
the Players Union owns you, but this is absolutely ridiculous.
Posted by Paul Devlin at 12:52 PM