BERNIE FINE IS ON THE LINE AND WANTS HIS REPUTATION BACK 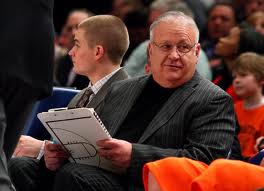 Bernie Fine never had a chance. He lives in a society that rushes to judgement,
believes everything it hears, and makes an accusation as lethal as a conviction.
Last November, the former Syracuse assistant basketball, was branded a sex
predator who preyed on young boys. He was labeled college basketball's Jerry
Sandusky, a pedophile who used his position in sports to take advantage of his victims.
Fine got thrown into Sandusky's cess pool, trouble was, he got slimed for all
the wrong reasons.

Last Thursday,  Federal prosecutors dropped their case against former Syracuse
assistant basketball coach, citing insufficient evidence to bring child sex abuse
charges against Fine. A year after the case broke and created a media frenzy
and firestorm, not many cared or even blinked, for that matter. They had made
their judgement and moved on, because in our society, that is what most of us
do. 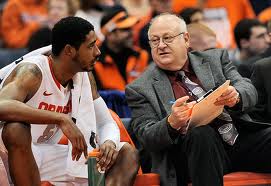 Fine must feel some vindication, but unfortunately, the damage has been forever
done. He can't get back the two things that are most important to most of us: our
livelihood and reputation. Fine was a trusted assistant and friend to Syracuse
basketball icon, Jim Boeheim, for 35 years. It was his life. But life as he knew it,
ended in November of last year, when ESPN, on the heels of the salacious
child-sex abuse scandal at Penn State, aired a segment where two former ball boys
at Syracuse, accused Fine of abusing them in the 1980's.

Never mind that it happened more than 30 years ago. Never mind that Syracuse
police had investigated the incident and found nothing that could warrant an arrest,
much less than a conviction. However, after the Penn State incident, people wanted
Fine to be tried, convicted, and sent to prison shortly after the segement on ESPN was
aired. They thought  Fine and Sandusky should be put away together for the same
crime. But there were  big differences in the cases. 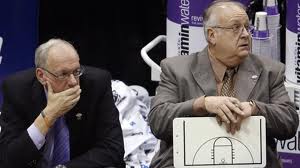 Law enforcements officials had investigated Jerry Sandusky and his alleged crimes
for three years. They interviewed hundreds of witness and poured through more than
100,000 documents before charging Sandusky. All anybody had on Fine were the
accusations on ESPN by two former ball boys from 30 years ago, which was well
past the statute of limitations.

Unfortunately, in this day and age where people are addicted to attention and their
fifteen minutes of fame, not to mention the belief they can make money off a scandal,
true ugliness reared its head and helped bring down Fine. A man from Maine, Zachary
Thomaselli, who was awaiting sentencing on child sexual abuse charges of his own,
claimed that Fine molested him in a Pittsburgh Hotel in 2002. Most of the public
believed that just because it was in print, it had to be true.

It wasn't. Thomaselli admitted that he was lying. A win for Fine, but too bad, the
damage had already been done.

ESPN released some truly bizarre, secretly recorded tape of a conversation between
Bernie Fine's wife and one of his accusers. In a twisted turn of events, Fine's wife and
the man who had accused Bernie of molestation 30 years ago, had a sexual affair. Now,
that is sick. In the tape, Fine's wife admitted that her husband had some problems.
After hearing that tape, Syracuse University fired Fine after more than 30 years with
the school.

Fine was branded a sexual molester and out of a job. In the court of law, people are
innocent until proven guilty, unfortunately, in the court of public opinion, a person is
guilty until proven innocent, and Fine was considered as guilty as they come.

People moved on with their lives and are probably now caught up in the General Petraeus-
Paula Broadwell scandal, making their own judgements and convictions. Bernie Fine
couldn't move on. He had to be the lone occupant in the hotel of living hell. Friends ran
away from him, looking at him as it he had a Scarlett letter branded with a hot iron
on his forehead.

Fine was only accused, but his life is essentially shattered, even though Federal prosecutors
vindicated him. Syracuse should do the right thing and give Fine his job back, but there
is no way that's going to happen. How does Fine go about getting any type of job? Any
employer who Googles Fine is not going to like what they're going to see. Few employers
would want to take a chance on someone whose name appears in the same sentence
as child. sexual. abuse.

What happened to Fine is not right and it's certainly not fair. If only people had investigated
the situation thoroughly and gotten the facts straight and seen the truth. But in our society,
that rarely happens.
Posted by Paul Devlin at 6:26 AM