OCCUPY THIS! TOP 5 PLACES TO BE 'OCCUPIED'

5. OCCUPY ESPN. Watching Stuart Scott (Boo-yeah!) is
bad enough, but to have our night of sports television
interrupted by Stephen A. Smith is unbearable. They fired
him once and then, inexplicably, brought him back. Why?
What does he do besides scream at us (thus, the nickname
Screamin' A. Smith). That interview he did with Terrell
Owens was some of the worst piece of broadcasting since
Sandra Golden used to ruin the programming at Fox Sports
South in Atlanta. By they way, how is that Terrell Owens
return to the NFL going? 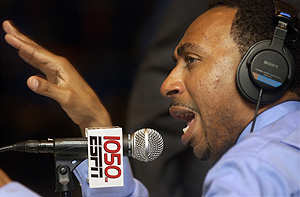 4. OCCUPY MIAMI. Fans in Miami should really be up in
arms over the performance of its "professional" football team.
There is nothing professional about the Dolphins. They are
poorly-coached, put in a poor effort, and poorly constructed.
Remember owner Stephen Ross' prediction that Chad Henne
would be better than Dan Marino? God, that's just further
proof that the smartest people in the room often say the
dumbest things. (See also Boston Red Sox ownership group.
John Henry: "I never wanted Carl Crawford." Then why
the hell did you give him a check for $142 million? The
fans in South Beach should also protest anything that comes
out of the mouth of LeBron James. No explanation needed.

3. OCCUPY REX RYAN'S SURGEON. The XXXXL coach
of the NY Jets must be the only person on the planet who
actually gained weight after having his stomach stapled. I mean,
even Charlie Weis lost 2 pounds (after nearly losing his life)
from the lap-band procedure. Ryan's surgeon is also having
trouble extracting the foot from XXXXL's mouth. On Wednesday,
Ryan said if he had been picked as head coach of the San
Diego Chargers instead of Norv Turner, the franchise
would've won a couple of Super Bowls. Ryan and the Jets
play Turner and the Chargers on Sunday. By the way, despite
guaranteeing Super Bowl victories in his first two seasons,
Ryan has yet to win it. 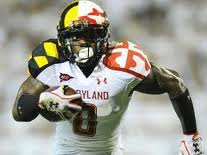 1. OCCUPY UNDER ARMOUR. After viewing the uniforms
they designed and produced for the Maryland football program,
protestors should show up at the sports apparel headquarters
in Maryland. These uniforms are a safety hazard to our eyes,
stomach, and environment. Oh, they might be a novelty to
some now. but by next year, the uniforms will rank with the
Taco Bell uniforms of the San Diego Padres and the rainbow
wrecks of the Houston Astros of the 1980's. B-R-U-T-A-L.
Posted by Paul Devlin at 5:53 AM