Brothers in arms on the field, in the clubhouse, and drinking
establishments throughout Boston,  the Killer J's, Josh Beckett,
John Lackey, and Jon Lester have teamed up to make sweet
music. In a reprisal of the 1985 Chicago Bears "Super Bowl Shuffle"
which was produced long before the Monsters of the Midway
annihilated the New England Patriots to win the Lombardi
Trophy, the Big Three have come up with their own anthem. 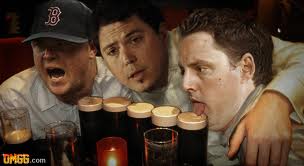 We are the Boston boozers shufflin' through,
gotta get to the clubhouse to have a frosty brew,
Forget about the game, we love our Bud and mocking Tito,
Ain't this great, we're stealing money, just like Barry Zito. 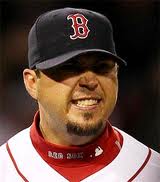 I'm Josh Beckett, the leader of the three, you may remember me,
I was the World Series MVP back in 2003.
I love to drink and throw the heater, but now I'm as despised in
Boston as Wil Cordero, that old wife-beater.

The media doesn't like my frown and wants to run me out of
town. I even get dissed by the immortal Curt Schilling,
You think I care, I've got two rings and have made a killing. 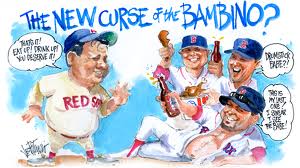 Uh-huh, Uh-huh, we are the Boston boozers shufflin' through,
gotta run back to the clubhouse to down another brew,
Who cares about Pap closing out the game, we're catching
a buzz, and by the way, that Irish Jig he does, is really kind of lame.

I'm John Lackey, the world's most miserable man,
I hate my wife, my life, and every god damn Red Sox fan.
I used to be relaxed and cool, hangin' 10 and pitching in Cali.
Now I'm uptight and a jerk, thanks to Crawford botching every
ball in the left-field alley.

I'm bummed and bored, that's why I sit in the dugout with a
a Corona in my coat,  Gotta do something to ease the pain
from watching Lucchino dance on the owner's boat. 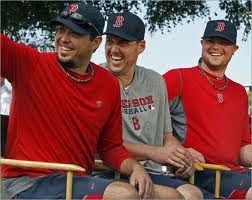 Uh-Huh, Uh-Huh. We are the Boston boozers shufflin' through,
Pookie, you better keep the beers cold for this effin crew.
The season is just about done, gotta have another beer before
Baltimore scores the winning run. 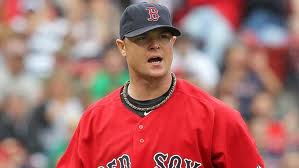 I'm the only lefty here and lord knows, I really love my beer.
But I don't know why everybody is bitchin', I only get drunk
on the days I'm not pitching.Yes, the name is Lester, and I can't
let this Fester. We blew a big lead and it was all the manager's
fault. Don't blame us if we were just cashing checks on the way
to the vault.