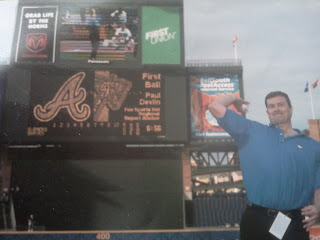 Baseball's Opening Day is truly a special time for many people. It marks a re-birth of the
game and a renewal of hopes and expectations. But for me, personally, Opening Day is
like the movie, "Groundhog Day."

In the movie that features Punxsutawney Phil, a ground hog is pulled out  of his den to
determine how long it will be until spring appears. Bill Murray's character, a weather anchor
who covers the event, wakes up to experience his nails-on-a-chalkboard moment, again
and again and again.

In real life, when baseball rips the wrapping off  its season, I, a sports anchor, who has
covered many games, gets to re-live one of the most embarrassing moments of my life, over
and over and over again.

You see, the baseball season doesn't officially start until the ceremonial first pitch is thrown.
It's a big deal for the game, and after fans settle into their seats, two questions need to be
asked. One, who is throwing out the first pitch? And two, will they bounce it? Over the
years, we've seen some pretty famous people toss some absolutely brutal first pitches.

In 2007, Mark Mallory, the mayor of Cincinnati, threw a first pitch that Time Magazine
ranked as the worst in baseball history. Eric Davis, a former Reds great who was supposed
to catch the pitch,was shown with an incredulous look on his face while mouthing the words,
"What the @!*#?"

Remember Carl Lewis in Seattle? His pitch went no more than 15 feet, making his performance
far worse than his rendition of the Star Spangled Banner at a Nets game in 1993. You know,
the one where he stopped in the middle of it and said, "Uh-oh".

My "Uh-oh" moment came in the summer of 2001. I was an anchor at Fox Sports Net in Atlanta
and had been asked to throw out the first pitch before a Braves-Diamondbacks game.
Randy Johnson was facing Tom Glavine, a pair of future hall of famers on the mound, and
about 30,000 people in the seats. 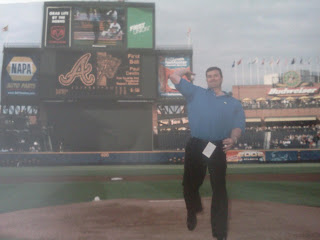 I distinctly remember my reaction to being asked to throw out the first pitch. It felt like I had swallowed the Rock of Gilbralter and it was sitting in the pit of my stomach. I was thinking,
"Screw that, I don't want any part of it."

I had thrown out a pitch at a minor-league game in Binghamton, and remembered how that,
even with just a few thousand people in attendance, was a nerve-racking experience.
And now,  I was being asked to do it at a major league game in front of 30,000 people?
Bartender! Make it a double.

I  reluctantly agreed to do it and went on to obsess about the pitch  for about the next 15 hours. Should I throw it hard, or just lob it? Whatever you do, JUST DON'T BOUNCE IT. I must've
said that about 25,000 times. My neighbor thought I was nuts when  he saw me throwing a ball repeatedly against the underground parking wall.

I had done this a trillion times in my life. I was decent player  who earned a scholarship to
UNC and played in the Boston  Red Sox organization. I admit that I suffered from "Mackey
Sasser disease" during the final two weeks of my "illustrious" career. (The illustrious part is
poking fun at myself for those scoring at home). The former catcher had a mental block
throwing back to the pitcher and often said that he couldn't feel the baseball when he threw it.

However, I thought I had gotten over that when Steve Phillips, then the minor-league director
of the Mets, asked me to catch in an exhibition game between Bingahmton and Norfolk, the Mets
AAA affiliate.

I threw a strike back to the mound after every pitch. 60 feet, 6 inches. Piece of cake. Hey,
now that I think of it, Phillips must've asked me to play just so he'd have the chance to hit
on my girlfriend, who was sitting in the stands. He had that addiction thing, even back then.

I arrived at Turner Field about 90 minutes before the game.It was a typical, blazing hot and
humid summer night in Atlanta. BJ Surhoff, who was a friend and college teammate at UNC,
was playing for the Braves,  and said he'd catch my pitch. His advice to me: JUST DON'T
BOUNCE IT.

My name blared out over the public address system and was posted on the scoreboard as I
made my way to the mound. I was smiling and happy until I toed the rubber and saw 30,000
people staring back at me. It was a surreal moment. I felt naked on the mound
like Nuke LaLoosh in that dream sequence of  "Bull Durham." The stands appeared to be
closing in on me, and when I glanced into the Dbacks dugout, Randy Johnson was staring at
me with a, "come on, man, we're waiting on you," look on his face. Toilet paper, please.

Suddenly, I had a Vice Admiral James Stockdale moment. During the 1992 vice-presidential
debate, the running mate of Ross Perot, famously uttered, "Who am I? And what am I doing
here?" That's how I felt. "Who the hell am I, and what in god's name am I doing here?!!!"
But there was no backing out. I had to throw the first pitch. 60 feet, 6 inches. JUST DON'T
BOUNCE IT.

The Braves PR team offered me a brand new, shiny baseball to throw. Throughout the game,
these are known as pearls. But I knew it would be slick, and if my "Mackey Sasser disease"
suddenly reappeared, I wanted to have a ball I could control. I brought the one I had been
throwing against the wall, which now had so many scuff marks, it looked like Mike Scott
had been doctoring it.

I smiled, took a deep breath, and threw the pitch toward the plate. JUST DON'T BOUNCE IT.
I knew when I made that grunting noise after I released the ball, I could be in trouble. It
looked good. But at the last second, it darted down. 59 feet, 10 inches. Surhoff couldn't make
the catch. I had bounced it.

Unfortunately, for the cameraman, who was kneeling down behind Surhoff, the family jewels
were not protected. He dropped his $100,000 piece of equipment and went down in a heap.
Surhoff, who had quite a temper back in the day, got up and started yelling at me, "What the
hell was that?! What did you do that for!"  I yelled back that he should have made the catch.

We almost came to blows right there in the middle of Turner Field. I wondered how that
must've looked to the fans, not knowing that we had been friends and former teammates.
I saw it later on video, and it was pretty funny.

As is custom, Surhoff got the ball and presented it to me. As if I wanted to keep it as a
reminder of one of the world's most embarrassing moments. He said, "What the hell is this?"
as he pointed to a ball rife with the scuff marks.  I just smiled, too embarrassed from the
moment, and couldn't give him an answer.

As a former jock, who often dished out more than a few jabs at teammates, I knew about
10,000 jokes would be coming my way. While leaving the field, Marcus Giles, then the
Braves second-baseman said to me, "Did you get that phone call? Your wife said she
wants you home, and don't forget to bring her skirt?" That was a classic.

The bad thing about it, I still had to go back to work to do the nightly sportscast. I knew I
would take a beating from my co-workers. When
I got into my car, stress, anxiety, and embarrassment came together and
I was sweating profusely. I was drowning in my own Tsunami.

However, I cleaned up, went back to the station and faced the music.
Ken Rodriguez, my co-anchor, introduced the highlights by saying that
"Paul Devlin was so tight, you couldn't squeeze a greased wire into any
orafice in his body". Creative? Yes. Crossed the line? Of course. But
I could take it. It was all in fun.  Not like Brad Steinke, my former
co-worker who wears a diaper and runs to management like a
petulant 5-year old girl when things don't go her way.

I was prepared for the moment. I put on a brown paper bag on my head
and became the unknown sportscaster. No matter the embarrassment,
I could certainly make fun of myself.

But when the baseball season opens,  its "Groundhog Day" for me.
Bill Murray's character awoke every day when the clock turned
over from 5:59 to 6:00, with Sonny and Cher's hit song, "I got
you, babe" blasting on the radio. On Opening Day, 11:00 signifies
my nails-on-the chalkboard moment.

That's when "Sportscenter" comes on with it's rip of highlights.
Every one of them starts with a politician, celebrity, or former player
throwing out the first pitch. Some are good, others god-awful like
mine. I don't even have to be watching to get that uneasy feeling.
When it's 10:59, and ready to turn over, I just know. I just know it.
Da-da-dah, Da-da-dah! And it starts all over again.
JUST DON'T BOUNCE IT!
Posted by Paul Devlin at 10:09 AM